The Cola of Oblivion: A Short Story

The cousin’s freckled arms reach out to the visitor. The cousin says she recognized her instantly from old family photos. There is glee and awkwardness, memories of what cannot possibly be remembered: playing as cherubs in the park across the street from their grandmother’s house, catfish caught with hand-held lines in the river behind the house.

They fill in what cannot be talked about. It’s been fine, yes, except for the house (now a home for hooligans). Trouble getting meat. Fear of going to church. Secret lessons to undo the official teachings at school. And the contentment that never materialized. The cousin’s husband taps his shoulder where invisible epaulets would be and pulls on an invisible beard.

They’re at a tourist restaurant where the visitor will pay the bill: the cousin, the husband, their teenage daughter (the girl is the age the visitor was when she left and has a tiresome air about her), the prices in dollars, the waiter barely keeping his resentment in check.

The cousin hardly glances at the menu while her husband and daughter hide their faces behind it. The cousin says she remembers the bill of fare down to the grammatical errors, that she used to come here all the time before she got married. The husband peeks out from behind the menu. The cousin orders for her husband and their daughter: appetizers and entrees and dessert in advance. The visitor discreetly asks for a salad, for which she is teased. The waiter mumbles.

The husband orders whiskey – the enemy’s drink, he says with a wink – and tells the visitor that, though she may have seen pictures of him enthusiastically jumping up and down at the rallies, clapping and grinning on cue – he waits for the waiter to leave — that is not how he really feels. (The visitor has no idea what pictures he’s talking about.) You get caught up in it, he says, you don’t know what you’re doing.

The husband makes much of the whiskey when the waiter brings it. He sniffs it, cradles it, finally sips it, then ahhhhhs loudly.

The daughter wants a cola – the black waters of imperialism, her father says with yet another wink as the waiter taps his foot.

It’s hard to explain, says the cousin. Once, I remember, at work, they came and told us this woman, Carmela, was a counter-revolutionary. And, you know, she had always been kind to me. She brought me crackers sometimes for the soup from the cafeteria at work because she knew I couldn’t stand it, it was so watery. But they told us so that when it came time to have a meeting to repudiate her, we’d vote against her.

The waiter brings the cola, sets it down so hard. It has one lonely cube floating in its center.

And we did, we voted against her, says the cousin, because she was a counter-revolutionary.

Because you get caught up in it, says the husband, so caught up you find yourself jumping up and down at the rally. You tell yourself later you did it because you were afraid someone would turn you in for not hopping on one foot … He laughs to himself.

So when they come and say Carmela must be expelled, separated from her work unit, naturally you raise your hand. You may as well be waving goodbye, says the cousin. And in the end, Carmela’s better off anyway.

Because she was expelled and separated and forced to not be caught up in it, says the husband.

The waiter brings a basket of hard bread and the cousin and her husband leap to grab it before it settles on the table.

After she’s expelled and separated, you realize you’ve done her a favor, says the cousin. By the way, the waiter forgot the butter. We need butter.

Butter! screams the daughter – who hasn’t said anything at all until now. The waiter turns toward them, ignores them.

Anyway, once she was expelled and separated, Carmela couldn’t do anything but leave, says the husband.

Even though she had no way to leave, says the cousin. Where’s the butter?

There were mobs outside her house shouting Go go go, says the husband. He breaks a hard roll in his hands, fills his mouth.

We did her the favor of freeing her from fear and shame, says the cousin.

And to discover what she was capable of, says the husband as he chews, because she had to be very strong to put up with the mobs with their Go go go and throwing things.

Turds, says the daughter, her eyes twinkling with glee. They threw turds!

And then Carmela remembered she had a relative in Alicante and another in Zacatecas, another in Luanda, and another still in San Francisco and a bunch in Montreal, says the cousin.

And while you’re jumping up and down shouting slogans, shouting Go go go, she’s already settled in Miami, says the husband.

Actually, it was Madrid, that’s where her postcard came from, Madrid, says the cousin. The postcard in which she thanked me for voting to expel and separate her because it was the best thing that ever happened to her, which is why I don’t feel bad, because she’s better off now than we are.

Can you imagine that? Better off than we are, because we were never expelled and separated.

We played by the rules.

Although, of course, we didn’t want to.

But we had to.

Had to jump up and down.

And expel and separate.

As soon as she was settled in her new life, she forgot about us.

Didn’t send us a single vitamin.

Or a throat lozenge.

Drank the cola of oblivion, says the husband.

You understand, don’t you? Oh, how could you? You never lived here. They took you – have you thanked your parents for that, for taking you?

They were prescient, your parents.

But it really wasn’t fair of your mother to stop speaking to us.

I understood she was Carmela’s friend, of course.

But it wasn’t our fault we had to jump up and down and expel and separate.

She turned her back on us, forgot about us in our hour of need.

Sometimes I think your mother thought Carmela was more important than us, her blood family.

Although I understood, in a way, because of your father.

He never got the jumping up and down.

To tell you the truth – and we’re only telling you this now, because you’re here, and we know that means you’re willing to defy him, because he can be quite the tyrant himself – he thought he was better than us because he never jumped up and down.

But he never had to!

He left before there was jumping up and down.

The food arrives all at once, including the butter and the dessert – a ball of vanilla ice cream with a string of chocolate dribbled on top. There is silence, as if in prayer, an instant in which there are sharp intakes of breath. Then there’s a restrained but tense gathering of utensils and the soft hiss of a blade on meat.

But your father refused, says the cousin.

And frankly, that’s why he had to be expelled and separated. What could we do?

He refused to jump, says the daughter with a certainty she can’t possibly have. Do you understand?

The daughter stares at the visitor, who nods, not out of agreement, but like a flagman waving runners at the end of a race.

This steak is delicious.

I want to jump up and down about this chicken, that’s what I want to do now.

If they came and asked me, I would jump up and down about this.

Not that they ask, because they don’t.

They just assume you’ll do it.

Because even though they don’t ask you, they make you.

But not me, says the husband, I was never asked. I just did it, because why go through all that pretense about it?

Instead of inhaling the food like they do– the mustard chicken on her mother’s plate, the rare steak on her father’s – the daughter hums and pushes a pair creamy shrimp around on her plate. The ice cream bowl is empty. The salad plate too.

My daughter has never had shrimp, the cousin says by way of explanation, so she doesn’t know what to do with them. She picks them off her daughter’s plate and pops them in her own mouth.

Anyway, says the husband, it’s not who we really are, those pictures.

Which is why you have to help us, says the cousin. Marry my husband, she proposes. I’ll divorce him, you marry him, take him with you. He won’t be in your way; I guarantee he won’t be in your way. Later, he can reclaim our daughter. Once there, she can reclaim me. And when I get there, you can divorce him and we’ll never ask anything else from you for the rest of our lives.

It’s the least you can do for us, says the husband.

Drank the cola, says the cousin, that terrible cola. 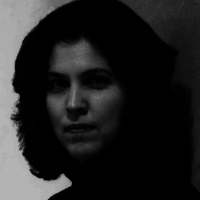 Born in Havana, Cuba, Achy Obejas has written fiction, poetry, and journalism. She is the author of five books, including the novels Days of Awe, Memory Mambo, and Ruins. She is the translator, into Spanish, of Junot Díaz’s The Brief Wondrous Life of Oscar Wao and This is How You Lose Her, and, into English, of Everyone Leaves by Wendy Guerra. A former reporter with the Chicago Tribune, she is now a columnist with In These Times. She is the recipient of the Woodrow Wilson Visiting Fellowship, a team Pulitzer Prize for the series “Gateway to Gridlock” while at the Tribune, a National Endowment for the Arts Fellowship in poetry, the Studs Terkel Journalism Award, a Cintas Foundation Fellowship and a 2014 USA Ford Fellowship. She is currently the Distinguished Visiting Writer at Mills College in Oakland, California.