Most of the prostitutas were French: pale, painted girls who could speak fifty words of Portuguese between them. One of them was a native: an índia who couldn’t have been older than seventeen or taller than five feet. Everyone called her ‘Índia’, just like everyone called the fat girl ‘Gordinha’ and the most beautiful one ‘Bonita’. In turn, most of the girls called Felipe Cabral ‘Doutor’, because he had been to medical school, though he never worked; he didn’t have to.

‘Are you going to Paris tonight?’ was a common whisper among men of a certain class, when their wives’ boring dinner parties were winding down. And then, ‘You don’t mind – do you, querida – if I went out for a nightcap with Paulo and Jorge? We have some business to discuss.’ Everyone in Belém had business to discuss. Imports, exports; razing down the Amazon and building shit on top of it. But there was no dinner party that night. Felipe went alone. His wife was at home, asleep, with a nurse watching over her. He had been replaced.

‘Boa noite,’ he said, as Madame Paris (not her real name) showed her witchy face through a chink in the front door. Seeing it was him, she opened it wider, just enough for his slim body to slip inside.

Madame Paris was the only person in Paris who spoke decent Portuguese, but her accent was as thick and stinky as a round of camembert.

‘I have something to celebrate. Have you got any champagne?’

He nodded slightly, walked past Madame and went up the stairs to the first floor.

Bonita was doing her make up: thick, white foundation and dabs of rouge. She wasn’t old, but in a few years her nickname would seem incongruous. She knew that. She had plans. Money stowed under the floorboards, where the other putains couldn’t find it. Back to Paris she would go, once the war was over.

She saw him in the mirror, standing in the doorway: that millionaire’s son, with his blank face. Just think of Paris. She cleared her throat. Her smile, in the mirror, was warm and loving. She turned to face Felipe.

He walked in, left the door wide open, and sat on the bed – looking ahead at the wall in front of him. Vulnerable, almost. His white shirt was open at the neck, and underneath it, his olive skin shone with sweat.

‘Champagne!’ said Madame Paris, bringing in a bottle of ‘Dom Perignon’ (cheap wine from the south of Brazil, with a fake label) and two glass coupes. She popped the cork, filled the glasses and left them alone, closing the door behind her.

‘What are you celebrating, Doutor?’ said Bonita, still at the dressing table. With another customer, she would have sauntered over and flashed some leg from under her ratty pink gown. Instead, she held her breath as he held up his glass.

‘Today I became a père. My daughter was born.’

Bonita thought of her son, Mathieu, two blocks away. Her mother, Francine, was looking after him. Sweating in the bedroom they shared between the three of them. Of course, Bonita couldn’t be sure, but the deep v of Mathieu’s lips – that didn’t come from her. And his small, serious eyes.

She rose from the chair, walked towards him and gestured at the champagne.

He nodded, and she took a glass. It transported her – the yellow of the wine, the bubbles, the curve of the glass. If she zoned out of her surroundings, out of the cicadas humming outside, the smell of jungle and sex, she could have been back home in the eighteenth arrondissement, drinking with one of her regulars.

Felipe raised his glass, his handsome face unmoved. They both drank. They both flinched as the wine burned their throats. A sip was more than enough. He took her glass from her hand, settled it down and took her hands in his. Tenderly, like a man in love.

‘Children are such a blessing,’ she said, just for something to say.

His boyish hand-holding turned into a clasp around Bonita’s wrists. He took her arms behind her back, pressed her against the wall and pulled her dressing gown to the floor. Not a squeak from Bonita. She was used to this shit. In fact, now that she’s naked, let’s just call her Marie-Anne.

‘You’re getting fat, putain,’ said Felipe. ‘Eating too much feijão.’

He flung her onto the bed, face-down. She remained still, trying to think of pleasant things – her beautiful boy, the way he had learned to say ‘Maman’ two weeks ago, and now he said it constantly: Maman, Maman, Maman. Who was she kidding? She didn’t have enough money to go to Paris. Not this year, not in ten years. This was it.

Marie-Anne turned over and scooted up the bed. Drew her knees up, took a cigarette from her bedside table, lit it with a match and blew out of the side of mouth.

‘Don’t smoke like that,’ said Felipe. ‘It makes you look cheap.’

‘Pretty cheap, considering I’m raising your son without any help from you.’

‘Do you want your fancy family to know that you have a child with a cut-rate putain?’

‘Take the boy.’ She blinked three times, to distract her tear ducts. ‘Take him. Your family has money. That’s what I want for him, not this.’

‘Are you crazy? Open your legs and let’s get this over with.’

[Thirty-four years later, on her death-bed on the Rue de la Solidarité, she would ask her daughter, Claudine, for one last cigarette and blow out the smoke in just the same way.

‘You shouldn’t smoke,’ said Claudine, a plump woman who smoked twenty a day.

Marie-Anne did as she was told. After he had removed his limp dick out of her body, he rolled over. Sweat trickled down his back. This country was too hot. No one had warned her. Madame Paris had shown her a photo of a beautiful city with a beach and a statue of Jesus looking over it. But here there was no beach, no statue, no beautiful city; just murky river, mosquitos and bâtards like Felipe.

‘I’ll take him,’ he said, still facing the other way.

Felipe turned and lay back against the faded velvet headboard, which hundreds – perhaps thousands – of men had held onto as they relieved themselves into various putas.

She passed him a cigarette. He lit it from a candle; his young, taut muscles straining as he leaned over the bedside table. He blew the smoke forward, with decorum.

Marie-Anne hadn’t expected him to say yes. It was a just a lark, a fleeting thought.

‘Non, c’est bien. We’ll be fine. We’re returning to Paris, anyway. I don’t know what I was saying. It’s the champagne.’

‘Returning to Paris? Does Madame know about that?’ She didn’t answer. ‘A house, maids, nannies, une éducation – all of this, I can provide. People will talk, but that doesn’t matter.’

‘Of course it doesn’t matter,’ said Felipe, walking to the door. ‘I’ll just tell everyone that we had twins.’

‘And one of the babies was unusually big.’

[‘Give me that,’ said Claudine. ‘You’ve smoked it right down to the end.’

She took the butt from her mother’s hand and stubbed it out in a coffee cup that held the dregs of Marie-Anne’s final coffee.

‘Mathieu… où es-tu?’ she said, as she expelled her last, smoky breath.

‘Who’s Mathieu?’ said Claudine, who looked up from the coffee cup to see her mother’s pale grey eyes, that had been so admired in the Amazon, staring at the ceiling. 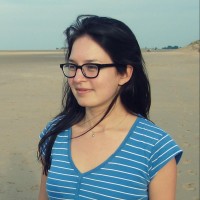 Luiza Sauma was born in Rio de Janeiro and raised in London. She has an MA in Creative and Life Writing from Goldsmiths, where she won the Pat Kavanagh Award. She is currently finishing a novel, Bethlehem, which is set in London, Rio and the Amazon. Her writing has been published in the Independent, the Independent on Sunday, the Guardian, Litro, the Fiction Desk and others.