The Vesuvius Infant: A Short Story

Previously by Kendra Fortmeyer: Mermaids at the End of the Universe.

What you do not know is this: in the final hours of the doomed city of Pompeii, the gods came down from the smoke-choked skies and said, Okay. We found you a place.

The village elders raised their faces from their hands. Yes, anywhere, please! they cried. They had tried everything. The construction of moats, the last-minute sacrifice of a lamb who didn’t stop bleating for hours after its death.

The gods hesitated. It’s a mite unconventional, they said. If it doesn’t work out, you’ll have to come back.

Yes, whatever, the elders said. The air was less air now than ash. They could see already how it would choke their children, streak down the faces of their mourning wives and lovers. In the background, Vesuvius belched sulfur. Now is not the time for disclaimers. Let’s go! they cried.

And so the survivors of Pompeii were relocated to a pair of breasts in the early 1990s.

The owner of the breasts was a woman named Nadine. She was in her early twenties and had never felt much attachment to her breasts. She knew she was supposed to; it was post-(post-?)feminism now, and everything was girl power pink and female executives wearing thongs in a way that was empowering and not sexist.

But it was hard for Nadine to understand the appeal of owning breasts. They were bouncing things, clumsy and foreign, that stilted conversation. In her pubescence, her mother had called her young breasts buds, and though Nadine had found it antiquated and condescending at the time, she couldn’t shake the assumption that someday her breasts would flower: the skin curling, unfurling; her chest becoming something fragrant and, like a cut flower, ultimately ephemeral.

The village gave her breasts purpose. This was how Nadine justified it to herself in those careful hours after the gods had left, in the quiet, awe-struck aftermath of there are gods and there is a village and you need my body for what. “It’s not like I’m using them,” she told her friends. (This is how she referred to them in the days after—them, or, neutrally, the breasts). “It’s for a good cause. These guys are refugees. I think they’re ethnic.” As she said it, she blushed, remembering that her friend’s husband Yariv was also “ethnic,” and to cover her embarrassment, she blurted, “Look,” and lifted her brassiere.

The women murmured, leaning in. The infinitesimal villagers had begun to settle in, to build houses and temples. A network of roads no thicker than hairs traced the arc of Nadine’s left areola.

One of the friends said, “It’s a mistake.” It might have been Yariv’s wife. She said, “Once you give your body away, you can never really get it back again.”

The rest of Nadine’s friends shushed her. “It’s so great what you’re doing,” they gushed. “So noble.” That night, there was a party, and Nadine wore the world proudly in her bra.

Things went well at first. The villagers were used to hilly terrain. Sports bras were uncomfortable and sex was a minor catastrophe, but their new homeland was warm and cherry blossom-scented and lacked (as far as they could see) active volcanoes. Nadine bathed carefully, chose only sensitive lovers. Once, a boyfriend became jealous, insisted that her breasts belonged to him and him alone. She cast him out of the house without further comment.

They built tiny estates and bathhouses, lived tiny lives. Whole generations rose and fell in the course of a week. Gradually, the villagers forgot they’d ever lived among mountains that weren’t made of living flesh. Their mythology shifted, evolved: the age of Great Showers, Bikram the Destroyer, the troubled goddess of Night, washing over the village in a sea of warmth and crushing dark. Even in times of prosperity, disaster ran deep in the Pompeiians’ veins.

It was late 2002 when Nadine got in touch with her breasts.

“Hey, guys?” she said. The village had been living there for nine years. Over four hundred generations of Pompeiians had lived and died on Nadine’s breasts. By all rights, they should have been in the Holy Roman Empire by now, but Jesus had never come to Nadine’s bra.

At the sound of the great voice, the village elders panicked.

Their translators worked furiously to rend the response into contemporary speech, sent up the reply. Faintly, from her bosom, Nadine heard, Sup, girl?

There was a scramble. Congratulations! announced her breasts.

“Thank you,” she said, flushing with delight. She wondered if they had noticed her glowing, but they didn’t say anything else, so she added (six months of Pompeiian time passing while she hesitated), “The thing is, I need the breasts—my breasts—back.”

There was a flustered silence. An actual minute passed. She explained (as, on the ground, doomsday prophets howled and people rent their garments in dismay and somebody formed a committee), “It’s for the baby. We’re going to breastfeed.”

She said, “It’s not personal. But you need to find somewhere else to go.”

There was no sound. But all across her chest, a thousand tiny pinpricks seared across her skin. A once-scorned people digging in their heels.

Nadine went to the doctor, went to the gods. “What can I do?” she asked. The former suggested a topical ointment. The latter demanded a fatted calf.

“Bottle feed,” said Yariv’s wife. She had forgotten the “ethnic” comment years ago. But it was too late. The baby had been born and refused the bottle. He reached desperately for his mother’s breast and whimpered, too weak to wail.

“They’re going to put him on an IV,” Nadine told the villagers, desperately. The villagers made no response. They had stopped worshipping the great earth goddess years ago. Now they told their children that she was a trickster, cruel. The Pompeiian children grew up wary and cynical, not trusting the ground beneath their feet.

That night Nadine dreamed that her baby came to her from the hospital. He was a child with a massively large head, trailing IV tubes like ghastly tentacles.

The child said, “How could you give your breasts away? Don’t you love me?”

Nadine tried to answer. She wanted to say, I was young and you didn’t exist yet. But the words kept shattering against her teeth and falling to the ground like ash, like pumice, like obsidian.

She awoke and ran to the bathroom, dark stains blooming on her shirt. She opened the hot water tap all the way and filled the tub. In the village, the leaves of the trees began to wilt. The wise men, coughing and half-blind, slew lambs and cast bone tiles. Once again, there was death lurking beneath the hills of their homeland.

“Cap them off,” they cried to their scientists (they had science by now; the gods had long since quit listening). “Sear them, seal them, cover them with tape!” But the scientists could do nothing. There are some things you can’t argue with: volcanoes and infants.

In the bathroom, Nadine stood over the tub for a long moment, for decades, and stared at her breasts. They were monstrous things, heavy and swollen, hot to the touch. Veins ran alongside them, or rivers, or roads. Carrying life, one way or the other.

Carefully, she climbed into the bathtub. The water was hot enough to turn her feet pink as a shrimp.

She listened carefully for the cries of the people, tried to look down and see what they were doing: building tiny rafts, praying to their gods, or continuing, even now, as though nothing were wrong, going to work and school and thinking about the neighbor they would like to fuck and what to bring to the company picnic. In the next room, the baby whimpered, and she shuddered, and carefully curled her body into the tub.

Everything was hot and wet and milky and deathly still.

Tentatively, Nadine touched her left breast. It was firm beneath the flesh, hard and ripe with life. The nipple burned in the hot water. Delicately, she reached for the soap, traced it across her skin. She tried not to think about the bodies embalmed in volcanic mud. She tried not to think about bodies in the water. The baby was whimpering but for a moment she pushed the sound away. She lay in the water and watched her breasts bobbing, felt the wet weight of them, and thought, mine. She stroked the curves, the dark areolae and nipples like pebbles, charting her own unexplored landscape. The baby began to howl, and the villagers were washed away, and the gods were forgotten, and she hugged her breasts in the dripping water and sang to herself, mine, mine, mine. 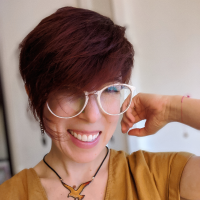 Kendra Fortmeyer has an MFA from UT Austin and edits fiction for Broad! Her work has appeared in PANK, NANO Fiction, Smoking Glue Gun, apt, Forge, and elsewhere.