“Don, you really think we should put together this ad campaign in the final hour for an important client in Japan when half of our department perished in the flood?”
“Mourning is just extended self-pity.”

“We should talk about a food plan.”
“Why does everybody need to talk about everything?”

“You think the rain will strike again? Jesus Christ, I hope it doesn’t happen again.” Pete falls to weeping.
“There will be fat years, and there will be lean years, but it is going to rain.”

“Shouldn’t we find a clean water supply first?”
“Oh, I know you have plans.” Draper motions to the idea board with half-finished brainstorming diagram labeled HONDA. “You think elves do this?”

In a building with a gaping hole in the wall and refuse strewn about the floor, Peggy pitches an ad to Don.  He takes a long drag on his cigarette. “I’m glad that this is an environment where you feel free to fail.”

Ken Cosgrove rocks himself in a fetal position against the wall. “Everyone I love is gone.”
“What you call love was invented by guys like me to sell nylons.”

Peggy stares out the window and watches a man stab another man on the street, then steal his clothes. “I feel like nothing will ever be OK again.”
Don rests his hand on her shoulder. “Advertising is based on one thing: happiness. And do you know what happiness is? Happiness is the smell of a new car. It’s freedom from fear. It’s a billboard on the side of a road that screams with reassurance that whatever you’re doing is OK. You are OK.”

“We’re starving and dying of thirst. Also you never say ‘thank you’.”
“That’s what the money is for!” Don flings money at them and it falls, soaking in puddles and disappearing through holes in the floor.

“Wawa,” Pete gasps, from the ground where a fallen piece of ceiling pins him. His mouth is full of dust.
“Wa—”
Don hands him whiskey. Pete drinks some and spits the rest out.
“Water! I need water.”
“Now that I can finally understand you, I am less impressed with what you have to say.”

Peggy walks into Don’s office and sees empty wrappers and cans from the remaining rations lying around his desk. He stares at her evenly.
“This never happened. It will shock you how much it never happened.”

The moon shines through the holes in the wall as Peggy cries quietly, dark circles under her eyes. “How do you sleep at night?”
“On a bed made of money.” Don points at his bed made of balled up money.

“Why are we even listening to you?”
“People want to be told what to do so badly they’ll listen to anyone.”

Don stands over his cocktail cart, grabs a glass, opens a bottle of whiskey, and pours. Nothing comes out.
“Why is this bottle empty?”
“Because all the stores have been looted and razed.”
“Every day I tried not to think about what would happen if this happened.”

“What did you just say? You want me to ‘find you a hooker’?”
“I would have my secretary do it, but she’s dead.”
“You had your secretary find you hookers?”
Don shakes his head.

“Some of us have talked. If we organize enough people, we could attempt to build a bridge to Brooklyn.”
“I blow up bridges.”
“You’re not listening.”

“We’re gonna sit at our desks typing while the walls fall down around us. Because we’re the least important, most important thing there is.” 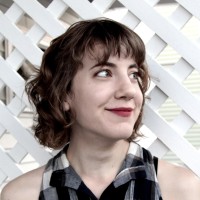