Creation Myth: A Child Tries to Make Sense of Her Disability

This is the story you’ve been told: you walked at nine months, ran at ten, and by eleven were doing somersaults upon somersaults until you collapsed red-faced from the motion, but most of all from the giggling.

By thirteen months, you had stopped all of this. You sat in one place staring into the middle distance with the concerned look of an old woman for whom the world was changing too fast. At fourteen months you said your first words, which were “knee” and “ouch.” You were rushed to the hospital.

Of course this is all hypothetical; your first memory is sitting on the orange shag carpet of the living room and staring out the French doors, trying to will the clouds to let forth the snow you knew they withheld. You wanted to build a snowman. Your wrists and legs were probably swollen and splinted, but it was a long time ago, and who’s to say? Then you were seven and yelling at Legos and jabbing them repeatedly with the butter knife, desperate to make them come apart and failing and knowing that you would always fail.

Your father is a sometimes Catholic, your mother a wannabe Buddhist, animist, existentialist, and lover of Zen minimalist clutter objects. Your house is filled with cairns, and Zuni fetishes, and somewhere a rosary, and sand paintings, and small statues of the Buddha. If you try to talk to your mother about why you are the way you are, she will ask, “Who said life was fair?” for the nine thousandth time, and your father will pick up your stuffed animals and jiggle them in front of you, making them say silly things in growly, odd voices, because when you ask certain questions both of your parents think that you are asking them to fix something you don’t think of as broken.

You can’t explain and they can’t fix it, and so in this case, their terror makes them useless.

Even at seven, you know that all of this is delicate and huge and that God is someone you’ll have to meet on your own. You’ll have to meet him alone, and there is no time like the present, you think, trying once again to separate the blue eight-dot Lego from the red four-dot and failing and knowing that you will always fail and that this makes you somehow different from everyone else. And even though it hurts and you know that is sad, it’s still such a small thing. And it is also the biggest thing, and you don’t quite know how to approach it. So you make a list of all of the things about you in the world that seven-year-old you knows to be true:

You are funny. You are smart. You are coordinated. You can cross your eyes. You are friendly. People like you. You are small and cute like a mouse. You are a good artist. You are a good reader. You are really good at swimming. You are covered in freckles that mark where the fairies have kissed you to sleep. You can almost whistle. You like to sing. You used to be strong like an athlete, but now you have Arthritis. Last week you learned to yo-yo, and on good days you can hula-hoop. You aren’t afraid of spiders or heights or anything else. You are happy.

God is a busy man. There are so many people he has to make and they all have to be different and they all have to get along and this is a lot, even for him. You know something of angels; you’ve seen them on TV. People on the street sometimes stop you and tell your mother that you are one. Basically, you think, angels are like God Juniors. They do stuff that he doesn’t have time for. When people tell your mother that you are one, it confuses you because you’re pretty sure God doesn’t need someone to draw pictures of wolves devouring schools and hospitals, or sing the scores to musical comedies from the sixties, but that is a different story. In this case, you are picturing the God Junior sky angels from TV, not whatever kind of angel people think you are.

You picture a factory. A people factory. It’s like an assembly line, but also like an operating room. It is clean and efficient and lit by the faint flickering of fluorescent lights. Groups of angels stand around rows and rows of operating tables. They are dressed in surgical scrubs, their wings covered in huge wrinkly pale blue sacks like the hats nurses must wear, but scaled up for the task.

God is usually there, but he has worked so hard for so long and maybe he has a fever, or maybe the surf is good, or maybe there is a flood or an earthquake, and either way all he needs is just one day off. And there in the middle of one of the tables in the middle of one of the groups of angels is you, or the collection of star stuff that will become you. The angels are tired and it is late in the day and they are discussing all of the other people they’ve made and how to make you different. They say:

On and on they went, letting the end-of-workday giddiness take over, until you were born — this hodgepodge collection of enviable traits. Time passed, and God came back to the people factory from whatever had called him away, and you grew and learned to walk and run and somersault until you collapsed with giggles and God looked around and said, “Who is that?”

The angels, smiling, replied, “She’s a little girl we made when you were gone. Isn’t she perfect?”

A worried look crossed God’s face and he inhaled deeply and paused in thought before the reply came. “She’s too perfect, and everyone else will be jealous and feel bad about themselves and be angry and sad! Something must be done!”

So God and the angels worried and paced in a big sky circle. They tapped their foreheads and they chewed the ends of their glasses and they pursed their lips and said, “Hmmmm” absentmindedly as they scratched their chins or stroked their beards.

“There’s nothing for it, we will have to kill her,” declared one angel, raising his finger to the sky.

The rest of the angels cried out, “No, no, no, no, no!” and, “Please no!” and leaned towards God, pleading with their whole bodies. “We really like her! Don’t make us start over!”

Again they paced and tapped and chewed and pursed and said, “Hmmmmm,” and scratched and stroked their beards. They fired out idea after idea, creating a literal brainstorm that blanketed much of Europe in snow and shut down all major airports for several days. Unable to agree, they kept going, flooding the American Midwest with the sweat and tears of their argument. Causing hurricanes in the tropics, Santa Anas in California, and a haboob in the desert with the warm ferocity of their breath. When God finally looked down and noticed, he cried, “Oh no! Now I have to clean all that up and we still haven’t fixed our problem!”

He glared at his angels, fiery-eyed, and said, “As I see it, we have to take away at least one perfect thing from this girl, or everyone else will be too sad in comparison. I propose a ballot. All of us will write down the one thing that we are most willing to take away from her, and then I will do it.”

So the angels took hold of the pens and scraps of paper that had appeared in front of them and they crossed their eyes and squeezed their tongues between their teeth as they thought and finally wrote. When they were done the papers floated gently up and away, and with a tiny pop they disappeared. God shut his eyes and mumbled softly as he began to count.

“It’s nearly unanimous. If we make it so she is no longer strong like an athlete, she will still be mostly her, but people who meet her will be able to feel good about themselves instead of bad. They will be sad for her and tell her how brave she is when she does normal things, and this will make them happy for themselves, and she will be able to be happy and fearless and smart and well-liked and able to hula-hoop as she is now, with no harm to others.” He paused and looked inward. “I will give her Arthritis, and I will take this as a personal lesson to keep my eye on you numbskulls at all times.”

And with that the angels clapped their hands and danced around and hugged each other and God and congratulated themselves on once again fixing the world. God handed them each a broom or a mop and pointed to the damage their brainstorm had caused. He pulled a tiny pouch from his pocket and pulled an even tinier pinch of dust from it. He looked at the dust in his hand, and with a weary expression and a heavy heart, he turned to where you sat, closed his eyes, and blew. 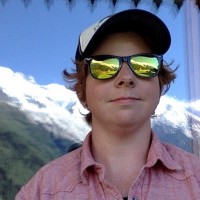 Christine Kathleen McMahon was diagnosed with Juvenile Rheumatoid Arthritis at 18 months. Currently, she writes about disability, rests, and runs amok with equal enthusiasm. Follow her on Twitter: @BionicTweed