How To Survive Your Family Reunion

The children are fed first. Do not think of getting in line until the last offspring under 10 has left their soggy, half-eaten plate on the counter above the trash can. You will not receive The Look this year, you won’t. The children. Are fed. First.

There is no alcohol. Do not go into the garage to the blue cooler where you will not find a selection of PBR, Coors, and Keystone from nobody knows who. Do not offer to refill anyone else’s red Solo cup while you’re not out there.

You know this, but it bears repeating. Do not ask anyone if they are pregnant. They either are, they just were, they were five years ago, or they’ve never been. Everyone but you has figured out who is which.

Note that the above tip does not apply to you personally. Your reproductive choices are nothing more than conversation fodder. Strive to be polite. Your stretch goal is to redirect with humor.

One of many fresh-faced nieces informs you she has recently started a Tumblr. Tell her you’ve never heard of Tumblr, as your mind’s eye drifts to your dash full of of yaoi fanfic.

Your aunt reintroduces you to her new husband. Recall that the wedding delineated gender roles down very neat lines. When he asks what you do, tell him that you mostly write about gay weddings.

The bathroom door is open but occupied with a being under the age of six accompanied by an adult. Smile politely but remain at the door. The line starts after you. Keep the smile when the adult insists that proper handwashing lasts as long as the ABCs. The smile is important.

A preschooler asks if your hair will ever grow back since you shaved it. Take the opportunity to point out that Mommy’s leg hair grows back after she shaves too. Explain what leg shaving is and that Mommy’s legs grow hair just like Daddy’s. Acknowledge that the world is a strange place.

Snap at the 35-year-old who teases his teenage sister about being fat while in line for food. You don’t recall her name. Feel bad about this and promise you’ll make a point to remember this year. You never will.

The good conversation and the good beer are near the circle of white-haired, high-waisted men that haven’t moved since the party started.

Do not bring the cigarettes this time. Seriously, what were you thinking last year? You’d have to walk a mile away to avoid comment this time. Although walking is good for the heart.

Find time to sit with the patriarch. He doesn’t get in the thick of things the way he used to, so sit and people watch with him. Nod when he tells you that asparagus is a cancer preventative. Again.

Don’t play Cards Against Humanity ever again. Never, do you hear me? Your opinion of that one uncle has never recovered, and it’s been three years. Also, no one thinks you have a sense of humor.

Don’t open your mouth about kids, not on any subject, period. No one cares. Honestly, they don’t even ask if you want to hold the new ones anymore.

Play at least one game of washers with Grandma. Yes, you suck at this game in kind of a brutal way. Yes, she will kick your ass, and yes, everyone will laugh at you for not getting even one washer on the board. Play the damn game. Drown your competitive sorrows in peanut butter cookies later.

Smile at the college kid whose head you tore off when he turned out to be a sexist drunk last time. He was really embarrassed when he sobered up, and you’ve said stupid shit too. Decline the Fireball shot.

An 8-year-old asks why your last name is different from everyone else’s. Offer your reasons simply and without overt bias. Do not clap with glee when she asks if boys ever change their last names when they get married. Don’t unleash your agenda too soon.

When a 5-year-old tells you that your blue dress is for boys, a nearby 10-year-old might, for example, scoff that boys don’t wear dresses. Alternate between feeling angry and relieved that you were a coward and therefore not the one to shatter their world.

If the reunion spans a couple days, bring along a book sure to inspire conversation. Terry Pratchett’s Small Gods is excellent for discussing the satirical properties of world religions while Milton’s Paradise Lost is a handy catalyst for analyzing Satan as a relatable entity.

Introverts should be encouraged that they will have plenty of alone time while everyone else plays those card games you somehow never picked up. Really, how is that the whole world knows how to play Euchre, Pitch, and Texas Hold Em except for you?

The bonfire will either be an important part of the event or nonexistent depending on how many tiny plastic buckets and scoops are in the sandpit this year. Bury your disappointment in sand castles when there are more than a dozen.

A number of dSLRs will be laying around, containing photos of toddlers, cake, and Grandpa. See to it that a few of the cameras get a bit of diversity with bathroom closeups of the Pap Smears for Everyone rainbow T-shirt you’re wearing under your cardigan.

Someone asks if the flask with the owl motif buried in the freezer is yours. Own up. You’re an adult after all. Everyone knows it’s you anyway.

Every few years, one of the Baby Boomers leads a midnight round of karaoke around the bonfire. Brush up on your Johnny Cash, Roy Orbison, and Kenny Rogers just in case. “House of the Rising Sun” is your trump card.

You can drive into town for Starbucks if you have to. Know that someone will find out, and you will be expected to pick up a gallon of milk, a bag of frozen chicken strips, and a box of diapers while you’re out.

If it’s Christmas or Easter, don’t try to join in the call-and-response stuff at mass. Everyone knows you can’t do it right. Smile and sing the hymns you know. Extra points if you can sing harmony.

Do not try to keep track of significant others until they’ve met either of two requirements: 1) they’ve shown up for three years running, or 2) they’ve actually married into the family. Engagements do not count.

If you do vaguely remember that a cousin has brought someone special the last couple years, tread cautiously. Be welcoming but don’t mention previous reunions. Wait for someone else to call them by name. You don’t want to look like you don’t remember them, but you don’t want to confuse them with an ex either. That is a very special type of embarrassment. 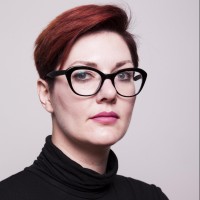 Chris Wolfgang is an editor and writer in Omaha. She usually edits technical blogs for software engineers, but please talk to her about sci-fi and comics instead.