Amy first realized something was amiss in the third grade. There she was one minute, staring out of the window, thinking about the blueness of her classmate Jonah’s eyes, when suddenly a week had passed.

She’d imagine a comet hurtling towards the earth, laying waste to the school, then wake up a day later in bed staring at the ceiling, her mom’s voice calling for her over and over. She’d imagine mountains folding into each other like origami paper, the sky cracking like glass, a boy in class passing her a love note. Next she’d be sitting in her mother’s car on the way to grandma’s house, December having passed with no notice from her.

She didn’t mention this to anyone at first. It didn’t matter much anyways—she was young and there was a lot of time to waste. There was always more where that came from.

So she let time pass like that. Sometimes she willed it on. When exams came during high school, she’d think about the future—apartments in New York, weddings in the snow, herself disappearing into the world with just a suitcase. When she was done, she’d pick up her term papers.

It wasn’t until she met Matt that it became a problem.

Amy was standing on the subway platform. A man beside her was playing the mandolin, his legs curled on the floor and his back resting against the vandalized columns. Above him was an advertisement for a craft fair, the flyer half-torn.

She watched as a woman ran up the stairs in stiletto heels, her trench coat wafting out behind her. With one swift motion the woman kicked the mandolin from the man’s hands and it went soaring, soaring, soaring into the oncoming train.

“That’s what you get,” the woman said, “for abandoning me like that, Dad.”

Matt was staring at her again, his eyes glazed over. Or perhaps hers were.

“Sorry, what were you saying?”

“Do you think we can just ask people to give us money as a wedding gift? Or is that rude?”

Amy’s eyes flitted back to the ceiling. She was about to daydream again, was already picturing her body floating through the black gaps of space, when Matt began to shake her shoulder. His eyes were watery. “You aren’t going to do it again, are you?”

Amy said, “Of course not. I was just trying to think what it says in those etiquette books.” But really she was thinking back to the gleam of the mandolin as it soared through the air.

“—and then Elijah called and said you haven’t been coming in.”

Amy sat up. She’d missed something. “But I have!” she said in reply to the only part she’d heard.

“You have and you haven’t. Physically you’re there, but not mentally.”

“How would Elijah even know that? He only knows because I tell him!”

“Well,” said Matt. “I can tell when you’re daydreaming. Maybe he can.”

Amy rolled her eyes. She saw the subway platform again, heard someone ask her for money.

“—that’s what my parents want. So would you mind?”

“No,” she said automatically. She hadn’t been paying attention, but she knew it was the right thing to say.

“Okay, good.” Matt leaned forward to kiss her and, as he did so, she heard the mandolin crunching beneath the wheels of the train.

Elijah would be gone the entire month of August, when the shrinks in the city usually took their vacations, so he’d asked Amy to cram in a few “emergency sessions” before he left.

“But, truth be told, you wouldn’t come and see me in August anyway. All that humidity—everyone’s mind is mush, no need to see me,” he’d said.

“I think it’s getting worse,” she said as soon as she stepped inside. He said nothing as she draped herself over the couch, her left leg sticking out. One of her shoes had fallen off somewhere during the walk from her apartment to Elijah’s office—she’d been daydreaming again, imagining the people around her breaking into song and dance like an old fifties musical, the whole world in Technicolor. She must’ve kicked her leg up.

Elijah was polishing the stems of his glassware, his sleeves rolled up haphazardly. He was watching Amy carefully. “Why do you think that is?”

Amy knew the answer, but she said something else: “Probably work. I just got promoted at the magazine.”

“Work?” Elijah sat down beside her on the couch. “You really think so?”

“What about your engagement?”

Amy shook her head. “No. I don’t think so. It’s been going great. We have everything booked. All we have to do is have the wedding.”

“I’m sorry I’m going to miss it,” Elijah said. He’d been the first person she’d invited, his name scrawled on the top of her “invitees” list. Hers was short, Matt’s several pages long. “You guys booked everything so quickly.”

“Well, we’re just ready to start life together,” Amy said as she tried very hard not to imagine all of the windows flying open and herself getting sucked out through one, Elijah’s glassware tumbling outside with her.

And then Elijah was saying: “—when I met Layla, I just knew”.

“Did you know when you met Matt?” Elijah asked. And that’s when he lost her completely.

Amy had been thinking of all the geese in the park diving into the water at the same time, the mass of their bodies unleashing a torrent of water into the grass, when suddenly she woke up and Matt was standing in front of her talking.

“Amy,” she’d said, her mind trying hard not to slip again. There were only a few ducks out on the water, dipping their heads below the surface.

She couldn’t even remember the daydream she had next, it was so inconsequential, but the next time she woke up he was in her bed. And so it went, her daydreaming and him being there, until one day it seemed like she couldn’t wake up without seeing him, couldn’t go anywhere without his presence.

Was that how love always ended up? She wasn’t sure. Whenever she thought about it, she’d start daydreaming.

Amy slid in between empty lanes, the windows down and the radio always playing a song she wanted to hear. She was going to San Francisco, to New York, to Austin. It didn’t really matter, the road never changed, but the destinations rolled like wheels on a slot machine.

Wherever she was going, Matt was not there. That was the only thing she was sure of.

Amy’s eyes snapped open just as Matt leaned in for a kiss. They were standing in a shroud of baby’s breath and beribboned arches—she didn’t remember choosing either. Her family, or what was left of her family, was standing up and drying their eyes. Matt’s parents were watching her curiously—had they figured it out?

“You did it again?” Matt whispered as they rushed out of the church in a hail of uncooked rice. She had never seen him look so hurt.

The next daydream started immediately.

Matt wasn’t her first boyfriend. That was Carter, in college. She lost a lot of hours that way.

Sometimes she would think about the gaps in that relationship, how sometimes they seemed more significant than the times she was there. How one day she woke up with her clothes in a pile on the ground, her body in a pile on his bed, and how she couldn’t remember anything but the dream she’d woken up from. How that seemed to happen to a lot of girls, but perhaps not in quite the same way.

She tried her hardest to daydream on the way back to her apartment that morning, but for some reason nothing would come.

“You know that isn’t true.”

“I think it is. You’re barely even here, not just mentally. Physically, too. Where do you go?”

“So what? When I’m here, you’re gone, so what’s the point of being here?” Matt looked at her, his eyes ringed with red, and she hated him. She felt it uncurl from her stomach and radiate out of her, wondered if he could feel its heat. “If you’re not just saying that, there’s this new surgery they’ve got. They can fix it.”

He handed her a pamphlet that had a picture of a man, a white thought bubble curling from his head. It was empty.

Amy woke up once holding a baby. She felt the blood rush from her head, the cold sweat trickling behind her ears. And then a woman walked around the corner, right out of the kitchen, and took the swaddled baby away.

“Thanks for holding her, Amy,” the woman said.

Amy supposed they were friends.

Dr. Glass was the world’s leading expert on Amy’s condition—there was no name for it yet, but he was pushing to have it called Glass Syndrome. He explained the intricacies of the disease in a conversational Cat’s Cradle—Amy dozed off until he’d finished talking, waking up with a clipboard in her hand. Matt pointed at the line where she was supposed to sign. He wasn’t smiling.

Amy scribbled her name, put a little face in the loop of the “y.” She tried her best to focus, but the next time her eyes opened she found herself in hospital scrubs, Matt was squeezing her hand, and a nurse kept telling her she’d be okay.

She woke up after the surgery, Matt by her side with a vase of flowers. He held her hand, he told her he loved her.

She closed her eyes and pictured the white, empty thought bubble from the pamphlet. When she opened them, no time had passed at all.

Once, when Amy was thirteen, she woke up from a daydream to find her father’s car gone and her mother crying in the master bedroom. For a while she quit daydreaming, but it didn’t last.

Several years later Amy will be standing on the subway platform, her daughter’s hand clasped tightly in hers, and her daughter will look up at her with big brown button eyes and say:

“Mom, do you hear the mandolins?”

And if she strains her ears, Amy will.

About the Illustrator: Stephanie Monohan is an illustrator living in Brooklyn. She is drawn to the sea, the occult, and the occasional cute anime girl. You can see more of her work here and here. 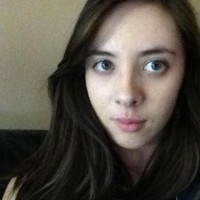 Ashley Burnett is a student living in Southern California. Her work has been published in Wyvern Lit and Necessary Fiction. Follow her on Twitter: @AshleyDBurnett