The problem is, the decision is not two roads diverging in a yellow wood. It is two roads in the wood and a third you think you can see just out of the corner of your eye. It is a fourth dashing through the woods like a wolf. It is a fifth in the sky. It is a sixth in the ground.

The problem is, it is not just the two roads diverging for all time, all your life neatly splitting down irreversible destinies like the fission of an atom. It is a series of decisions — yes and yes and yes.

The problem is, he’s so understanding and enlightened. He’s not going to be one of those ogreish husbands of the past, the ones who would make you move to a new city that speaks a new language, where there is no hope for you to advance your career, to get out of the house. He wants the choice to be yours. He’s not going to be put in that position, no sirree. He wants to go. He wants you to want to go.

The problem is, still, the decision must be made. And if he is not going to make it, then it is up to you.

The problem is, you have a very poor understanding of yourself. You always have. When you were young and your parents took you to the beach, driving for hours, slathering you in slick greasy sunscreen, and you got sand in your shoes and the water was cold and your damp bathing suit stuck clammily to your little butt, they asked, isn’t this fun? Aren’t we having fun? And you honestly didn’t know.

The problem is, you don’t know yourself and so you don’t know if you choose to move because love and marriage really are more important and that is Okay, or because you are sacrificing something you never, ever should sacrifice.

The problem is, your feelings tell you that you do not want to go. But you don’t know what life staying would look like. It would necessarily be a split. It would be a return to before you met him, to looking out the window when you were very very lonely and wondering, Should I eat something today? The thought terrifies you. That, too, is a feeling.

The problem is, last night you walked along the shore of the lake with your husband and his arm was sturdy around you, the wind asking a question in your hair, and you realized that over time, you had come to love the water and the beach. Didn’t that show you could get used to anything? Wasn’t that first initial reluctance just a frightened reactionary impulse, and weren’t you so bad about those, like refusing to try pizza until you were eight years old, and then didn’t you love pizza? Who doesn’t love pizza?

The problem is, last night you walked along the shore with your husband, and he held you with his lovely arms, and he pressed his lips to your head and whispered questions in your hair.

The problem is, it feels like injustice for him not to have to decide. This is his job, and it is the only job he has ever wanted. This is the offer. And if you decide not to go, he will not come after you. He will not try to convince you, either, because that would be cruel, for him to make you come. So he is willing to let you go.

The problem is, you are cruel. This is the only job he has ever wanted. You are so cold, even to consider letting him go over this, a place. Isn’t any place as good as any other? The fact that this is even a decision is cold and horrible of you.

The problem is, you know his smell like an animal. That inside part of you responds to his voice. It has been years since you met at the mailboxes of the student union, your hands brushing, but still, his touch makes your body fascinated, rapt.

The problem is, your mother followed your father to a strange flat town in the middle of nowhere, the place you escaped from. But she grew up in a time when you were not allowed to say menstruation on television, when divorced women could not sign a mortgage without their father’s permission. What is your excuse?

The problem is, he is not romantic. He doesn’t give gifts. He didn’t go down on one knee. He ducked his head and shrugged in this bashful way and said, I don’t know — do you want to get married? But you have always loved this resolute lack of sentiment of any kind. Romantics cause problems. Romantics have issues with chivalry and jealousy. Hasn’t he always let you dance with whomever you wanted to?

The problem is, now it is later and the decision is made, you have moved with him where you tutor bright Berlinese children in English and you try to write poems, but the language that is all around you is not yours, you are not swimming in words you understand. The baker and the butcher are brusque and impatient; they don’t have time for your fumbling attempts to speak. The husband’s coworkers speak English around you out of kindness, but it is not the language that they feel anything in, so they are all curiously flat and dead around you, all friendly automatons asking you where the library is and do you enjoy asparagus. Every conversation in English is like this. The words that you loved are drying up in your mouth, are shriveling like dead leaves in your gut.

The problem is, this is a good place, but it is not your place. It is not Paul Bowles’ Tangiers or Hemingway’s Paris. Always you have been looking for your Tangiers or Paris. You have lived in many different cities, looking for the one whose traffic, whose crowds, whose birds and garbage trucks, are all singing your song. But it is not this place.

The problem is, now you are on a vacation with your husband, and you are in Vermont, staying in a little bed and breakfast that is an old red barn. In the morning you wake up and hear rain on the roof, rain beating gently into the river outside, and you listen together, your arms snug in each other’s embrace, and for a while you are well.

The problem is, you jog along a country road in the evening and hear the birds you know, and they are singing your childhood, they are singing the song of you lying in bed right after your mother has pressed her cool lips to your forehead.

The problem is, you go hiking in a rainstorm and must take shelter under a rocky overhang somewhere in the green mountains while thunder booms around you and lightning seems to split your insides. You want to shout and rejoice, you love this place. But your husband is hunched and miserable, waiting for it all to be over, even if it is your happiness.

The problem is, you have tried your hardest to be happy. But you cannot be happy.

The problem is, you must tell him goodbye, you must tell him to go back without you to the work that he loves, and you must stay. You decide to do it in the airport, so that too much momentum will carry him forward for him to turn back. You tell him and he doesn’t believe you, he thinks you are making some elaborate joke which really isn’t funny. And when he finally does believe you, when understanding comes into his eyes, you want to take it all back. You have never been good with decision making. Every choice in your life has been met with doubt and regret. You always wanted chocolate the moment you picked strawberry. You almost sent the ring back to him a week before you walked down that flower-strewn aisle. In the moment that a choice has been made, that is the moment when you see like a flash of lightning the right path: and it is always the one you have failed to choose. You want to cry to him, still the only one for you, turn back. You want to say, as he walks away down a non-descript corridor, his steps heavy and confused, but still moving, crushingly, forward, I didn’t mean it. I’ll follow and follow and follow.

But the problem is, you don’t. 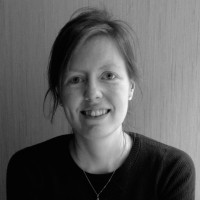 Blair Hurley received her B.A. from Princeton University and her M.F.A. from NYU. She has stories published or forthcoming in Washington Square, Hayden's Ferry Review, Descant, Narrative Northeast, The Red Rock Review, The Best Young Writers and Artists in America, and elsewhere. The recipient of an “Emerging Writers” Fellowship from the Writer’s Room of Boston, she is currently at work on a novel.