Beyond Scoring Goals: On Building a Life

In February 2002, when I was a junior in high school, a house burned down in Missoula, Montana.

Houses can do that, burn to the ground – it’s not entirely uncommon here, especially in the winter when heating systems can go awry. But in our city, considered to be the liberal, blue freckle on an otherwise very red state, even more important than the ashes was what arose from them: The house belonged to a lesbian couple and their toddler son, and was torched intentionally. The little family was forced to crawl out a window to escape with their lives.

The flames came only days after the couple – Adrianne Neff and Carla Grayson – had filed suit against the state university system, seeking the same employee benefits heterosexual partners enjoyed.

The community rallied around the couple, but the arsonist was never captured. For a while, a theory floated around that the couple had burned down their own house. To me, a then-16-year-old coming to terms with her own sexuality, the terror in the arsonist’s message mixed with the community’s reaction was oddly reminiscent of what I’d always heard growing up in church pews: Love thy neighbor, but all sinners can burn.

I’m fascinated when I think of what has changed in my short lifetime. In middle school, there were bumper stickers and signs all over town showing a male symbol plus a female symbol equaling marriage.

In 1997, my state, Big Sky Country –where freedom is as much a part of the cultural fabric as cowboys and mountains — would vote to change the state constitution in order to limit the definition of marriage: one man, one woman.

Two years later, the U.S. Women’s National Team would win the World Cup in a stunning set of penalty kicks against China. The final kick, the one to win it all, came off the boot of Brandi Chastain. She celebrated with a running slide to her knees, pulling off her shirt, all muscle, skin, and power. Her black sports bra is burned into my memory: I thought she was so brave to act like a man would on the field, those men who tore off their shirts at the slightest provocation.

But following the celebration, the media converged to discuss Chastain’s reaction to that victorious moment. Was it proper that a woman should take off her shirt like that? Sure, she won the trophy with that beautiful penalty shot, but did you see her sports bra?! Even 10 years afterward, in an ESPN interview about the 1999 World Cup, Chastain had to explain herself; had to express that it wasn’t an intentional attack on American values, but a pure flash of emotion.

It was a heady, confusing time to be a girl.

You can be powerful, but not in a way that implies sex.

You are your own woman, but the government will regulate your choice of a spouse.

It’s almost hard to believe, now, living like that. In October 2014, a federal judge in Montana declared the state’s ban on same-sex marriage unconstitutional. Just a few days before that, I’d knelt down on the shores of a lake in Glacier National Park and asked my girlfriend of eight years to be my wife.

We’d planned on driving to Washington state, where same-sex marriage was legal. We could only laugh about the fact that a three-hour drive over imaginary boundaries meant the difference between being equal or not, our rights determined by a few hundred miles. If we didn’t laugh over it, we’d weep.

After the Montana ruling, it felt like the floodgates opened. Rights I had never in my life imagined having were falling from on high, with the Supreme Court declaring all marriages equal in its historic June ruling.

Just a couple of weeks after the SCOTUS decision, the U.S. Women’s National Team was at it again in the World Cup final, this time facing a formidable Japanese opponent. It was a blow-out, with Carli Lloyd pulling a hat trick in the first 16 minutes of the game, the USWNT playing the best it had all tournament. But for me, the most stunning aspect of the game came after the win: U.S. forward and team leader Abby Wambach, overcome with emotion at finally achieving a life goal, sought her wife, professional soccer player Sarah Huffman, in the crowd.

Not only did the cameras stay with Wambach as she cried and scanned for her wife, but they continued filming live as she and Huffman finally found each other and embraced. Women – wives! – were kissing on nationally broadcast television, in the living rooms of more than 22 million Americans.

Having lived through less accepting times, I instinctively cringed, even as I thought about how moving it was. What would the backlash be the next day? Would Wambach, a pure athlete with a serious fan base, experience repercussions for following her emotions, for living in the moment the way Chastain had?

No: The headlines read “Wambach Kisses Wife After World Cup Win” and “U.S. Soccer Star Abby Wambach Melted Everyone’s Hearts When She Rushed the Stands to Kiss Her Wife” (Cosmo goes big on headlines). Instead of being vilified or told to cover up those intimate parts of herself, Wambach was celebrated.

My partner and I bought a house together in June 2014. We wanted to have a place to grow together, a home to call our own, the freedom to do whatever we wanted with our land.

Owning a home is part of the American dream, sure, but we had other reasons to buy. In Montana, it is still legal for landlords to evict renters if they are LGBT. I could be fired for being who I am; there are no laws protecting LGBT people against discrimination in housing or at work.

Buying a house, for me, meant protecting my growing family. No one can kick us out of here or tell us what to do, but we still worry. We worry about vandalism, about someone scrawling hurtful words on our door. In the back of my mind, I worry about fire.

We’ve made so much progress in what seems like such a short amount of time — sometimes it can feel as if nothing is happening and everything is happening, all at once. It can be easy, while celebrating the well-deserved whirlwind of our recent milestones, to forget how far we still have to go.

I can be married now with the legal protections provided therein. I can see athletes who love like I do on TV. I can hold hands with my soon-to-be wife and only get a few odd stares instead of insults hurled at us.

We’ve come so far, and I’ve built a life I never thought I’d be able to have, especially not in Montana.

But my house can still burn. 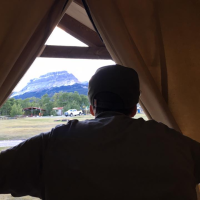 Molly Priddy is a writer and editor living in Montana. You can follow her on Twitter at @mollypriddy, where you'll find plenty of photos of her dogs.