Heroes: Finding My Home in Addiction and Recovery Stories

Exactly twenty years ago, while I was on a 72-hour hold in a psych ward in San Francisco, a plump old hippie in all white asked me if I tried to kill myself. I laughed at him because I thought I had died. He smiled back and fondled his sandalwood beads.

“No,” I said. I didn’t remember wanting to die as much as wanting to kill the feeling. I’d been tweaking for weeks and the hostile whispers got louder as the twitchy nights whirled into days. I lived with my dealer and lover, Bree. We got into a screaming match, probably over who stole the stash, when I grabbed a serrated knife and held it high in the air like a tennis racket poised to serve. I flew at my wrist. That, I remembered. Wanting it to stop, wanting out of that fight. Wanting to keep the tiny bugs from marching up my calves — to win the argument once and for all. There was no stash. We’d done all of the speed.

I remembered Bree’s blood-soaked bandana tied around my wrist, our yellow kitchen tile in a puddle of my black blood. Red, glow-y ambulance lights because her green Karmann Ghia was out of gas. I remembered the empty gutted blankness that came to stay — finally, the cold and still silence.

The hippie smelled like cookies. He stared at me steadily. “Close call for an accident,” he said, writing notes on a clipboard. His gray Santa Claus beard was incredibly reassuring, especially the crumbs near his chin. My mouth watered. I’d eaten solid food and I craved Bree’s specialty: whiskey and pancakes.

Before my mostly meth diet, I’d been devouring Jeanette Winterson and Kathy Acker while attending Mills College. I worshipped Avitol Ronell and absorbed her every word as gospel, but soon I dropped out to tweak.

According to the bearded hippie, I’d cut my wrist with enough force to require several stitches and a caseworker. That explained the IV and the clipboard. I wriggled to sit up but was tucked tight in a sterile bed between stiffly pressed sheets.

“What time is it?” I asked. I worried about missing more work at The Wasteland, where I sorted through bins of used rocker shirts, vintage dresses and scuffed sunglasses. I’d been skating on thin ice for months with my crying jags and chronic lateness. Written up twice by management and warned verbally.

The hippie pointed to the large clock on the wall. It was 3:30p.m. Another day dead, lost in the ghost of speed fog. It reminded me of the William Burroughs landscape in The Place of Dead Roads: a monster rising and falling in the half-light.

“Do you want to go home?” he asked, with special emphasis on want. He was really asking if I was another one of the battered women I saw pass by in the hall with shiners and swollen lips. I wasn’t escaping a raging man. I was escaping my own spin cycle of powders and pills and an unquenchable thirst that grew into a voracious drive to feel gone.

I could not go back to our piles of powder and the cat pee in the corners. For many evenings after work, I’d snorted thin bumps off the cover of our PJ Harvey CD — the one with her bright pale moon face and snaky dreadlocks whipping around, smacking her lips. I waited for Bree to return from delivering quarter baggies and she always did, along with her array of sniffling tweakers.

I very much wanted to go home.

I imagined crashing in the break room upstairs at The Wasteland with a sleeping bag next to the gun stamper I used to press price tags on old shoes before arranging them on a metal display case.

I hadn’t returned my mother’s calls for months, and I wasn’t about to now.

“Is there someone you can call?” he asked. He was so calm and white with his Rainbow Gathering wristband. His one coral earring. I told him there was, although there wasn’t. I imagined Bree hanging around that waiting room, watching Oprah with our copy of Written on the Body in her back pocket. Maybe she wanted to get sober too. Or maybe she just wanted to say good-bye. Even so, I couldn’t go back to our place of powders and patina’d walls. I couldn’t die either. My forehead ached with a killer migraine. My stomach was a new kind of queasy from whatever sedative they pumped in my arm.

And, for the first time in ages, the voices stopped.

Like the other patients, I shuffled to the payphone and held the greasy receiver in my hand for a long time before dialing. I missed Bree and the speedball hole she occupied in my heart. Her low, singing voice and her acoustic guitar harmonizing above the chilly hilltops in the Castro.

I didn’t call Bree that day. Instead I dialed my one good friend, Meghan, who offered her couch and a leather cuff bracelet to cover my bandaged wrist. After I was released from the psych ward, I walked to Meghan’s house in my dirty bloody shirt. She also offered a wine-colored couch in a pink room that reminded me of a 1930s bordello with lush gold banisters and glossy black stripes. I could crash there as long as I stayed sober. Starved for solace and forgiveness, I read all of the books on Meghan’s shelf: Jerry Stahl’s Permanent Midnight, in which drug addiction was its own kind of familiar death. Margerite Duras’ Hiroshima, Mon Amour, in which woman’s heart contained a slaughterhouse of shattered love; and Rebecca Brown’s collection, The Terrible Girls, which begins:

Meghan nudged me to seek support in AA and so I went. For the first time ever, I fought for my life and I was ready to go home — to figure out what home would be. I went to AA meetings and sat in candlelit basements and bright churches with stained-glass windows and found laughter with the gay guys who clapped and sang and told jokes. I listened to their sincere stories of triumph that filled me with undeniable hope. I frequented a 10:00pm meeting in the Mission, where retired winos nodded off on ratty couches and stayed for the muddy coffee, then shared about rebuilding their relationships with their daughters and wives. I read their mantras, stayed clean, and they only asked for my hand. Sex workers ducked in to use the bathroom. It was our safe haven.

I heard stories exactly like mine from men and women who were nothing like me at all, except we had stopped doing the thing that was killing us. My ache for better matched theirs and in this way, it was a group victory.

The home I found was in books and stories about recovery in which people survived their own Icarian flights and seized another chance at life. Comfort was in the tiny spark that happens when one hopeless person overcomes seemingly insurmountable obstacles. I chased that spark with the same ferocity I chased my last hit.

I read more books about addicts and alcoholics, and their words made me want to be alive. I felt Sarah Hepola’s life in my heart as she stumbled into cabs after too many drinks and woke up with men she didn’t remember in Blackout: Remembering the Things I Drank to Forget. As she crawled through a maze of drunken evenings, trapdoors and blackouts, I felt joy when she finally surrendered. I found peace in the same places that Jerry Stahl, Mary Karr, Patrick O’Neil, and Michelle Tea did. Their addictions and struggles proved I was neither alone nor defective. Their pain changed me the way death changes us — I could simply look at it enough and remember the lost darkness necessary to find sobriety and hope. Because in those stories of homelessness, needles, blackouts and recovery are my peers, who are just like I was twenty years ago, one young woman with scarred wrists hell-bent to get somewhere else — a sturdier place — kicking and screaming my way into this beautiful life where I can stay, remember, heal and write my own stories in order to help someone else. 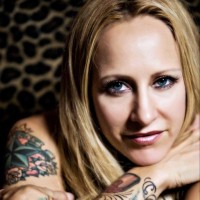 Antonia Crane is a writer, teacher and Moth Story Slam Winner in Los Angeles. She is the author of the memoir Spent (Barnacle Books/Rare Bird Lit March, 2014). She was featured on Lisa Ling’s documentary, “This is Life” on CNN. Her other work can be found in Playboy, Cosmopolitan Magazine, The Rumpus, Dame Magazine, Salon, PANK magazine, Black Clock, The Believer, Frequencies, Slake, The Los Angeles Review, The New Black, The Heroin Chronicles and lots of other places. She the CNF editor at Word Riot and The Citron Review. She is at work on another memoir about running wild in Mumbai, India as a teenager.