Why I Didn’t Write Back

You wrote, “Hello. Nice profile.” You asked me how my week was going. I hadn’t opened my blinds in five days. I thought about responding, “My week is going well.” I imagined us in two years, dining in a restaurant in silence.

You asked, “What music and literature do you enjoy?” Nobody talks like that in real life. I wanted to pretend this was real life.

You wrote, “You help me for improve my english and I can help you to learning cooking, Italian or play soccer.” I tried to imagine what it would take to motivate me to play soccer.

You had only one picture; I didn’t trust you.

Your self-summary read, “I hate lies.” You must have been sixty. Your profile said thirty-two.

Your profile said, “I am in need of the best love.” Your honesty made my throat ache.

You wrote, “Hey, I want to be honest here.” I stopped reading.

You described yourself as old-fashioned, suave, and aggressive.

You wrote, “Hey, how are you?” I was bingeing on Hershey’s Hugs and sending telepathic messages to my ex: think of me.

Your stated preference for positive attitudes.

The joyous photo of you frozen mid-leap.

You wrote, “An author? Awesome. Unless you’re being like the woman I met last week who also indicated she was an author before fessing up all she meant was that she ‘authored’ her own profile. Ugh.” I felt protective of her. Let us call ourselves what we believe we are.

Your profile said that you strive to better yourself every day. I had just watched all of Breaking Bad in one week.

You wanted to fuck. You wrote, “We are both old enough to be perfectly straightforward, no?” No. But I might have said yes if you’d called me young.

Your profile said, “No drama queens,” and I considered my PMS, the reliable monthly theater of it.

Your mirrored sunglasses. I imagined looking into your eyes and seeing the smallest versions of me.

You were drinking soup from a big spoon, so absorbed by the task, so vulnerable tending to your human need, which none of us can escape.

You were from New Jersey and wrote to me, “You should know that I am in NYC a lot as I have family & friends in NYC. I am very flexible and would come all the time.” The Freudian slip was too much.

I got your message while listening to a song he once played for me on a jukebox.

You were so crushingly handsome (and a fireman!), my feelings got hurt just looking at your face.

You wrote, “Why haven’t we hung out yet?” You were twenty-three.

I was distracted. I had pinned all my hopes to a man in a tuxedo who looked like a husband from a movie. I was waiting for him to write me back. (He never wrote me back.)

When I didn’t respond, you wrote again: “You’re a twat. That’s why you’re alone.”

You wrote, “I hope this doesn’t freak you out, but we’ve actually met once before, after one of your readings. It was at the McNally Jackson bookstore in Soho a couple of years ago.” I wasn’t freaked out. You seemed friendly. But I looked at the silly questions we’d both answered. “In a certain light, wouldn’t nuclear war be exciting?” “No, it wouldn’t,” I’d responded. “Yes, it would,” you’d responded.

“I am nice, but not weak,” was your self-summary. In my head I swapped the adjectives.

You were shirtless in all your pictures.

Your arms knotted across your chest locked me out.

You led with your Myers-Briggs results. 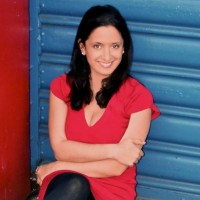 Diana Spechler is the author of the novels Who by Fire and Skinny and of the New York Times column Going Off. Her work has appeared in GQ, The Wall Street Journal, New York, The Paris Review Daily, Glimmer Train Stories, Esquire, and elsewhere. She recently won the Orlando Prize from A Room Of Her Own Foundation. She teaches writing in New York City and for Stanford University's Online Writer's Studio.