Why I Can’t Come to Your Play

1. I really love musicals — Phantom is about my favorite play ever! — and I can’t think of anything I’d rather do more than see a brand-new, original musical. But I’ve been so distracted with my cousin’s bridesmaids all staying at my house. There are eleven of them, and they haven’t even changed out of their dresses, and it’s been three days since my cousin’s wedding. As soon as they leave, I’ll be able to focus.

2. How many more weekends did you say it runs? Is there a website, or is the theatre company too small for that? I did try to get tickets that first week, but the link to buy them seemed to be broken. It kept sending me to some pest abatement service.

3. By the way, I’m so happy Emma saw it! She and I are practically the same person, so it’s almost as if I were there myself. She said the play must have been an enormous amount of work and time for you. I’m impressed that you find a way to do it! It’s so great that she was able to be there to see your talents shine, even if the evening was a little long.

4. I’m volunteering at the homeless shelter on the weekends, as I think you know, so it’s kind of hard for me to get away for something like a play, but I promise I’ll try. “Diurnal Rhythms” is such a great title.

5. I do want to come, and I still might be there — maybe some night when the house is really full, when I can just slip in more or less unseen and blend into the crowd. (Can you text me from backstage and let me know, like maybe right before showtime, as to how crowded it is?) Because back in college, I had a thing with the guy who’s the stage manager, if his name is Drew. At least, I think it was him. Emma told me the theatre was pretty empty the night she was there, so if I happened to come on a night like that, I might run into Drew, or he might see me, and that would just be awkward.  So keep that in mind, if you can, and if you can let me know about the crowd and maybe leave a ticket for me, I could probably bring a friend, as long as it’s not for a Thursday or a Friday or a Saturday or Sunday performance.

6. Okay, I can’t believe I’m even telling you this, but content involving squirrels and/or trapping…? It’s just really triggering for me. A long story which I’ll tell you at some point. Hey, maybe an idea for your next play! But it’s pretty dark, so I don’t know. Might not be your thing. In any case, unless I’m wrong, I think Emma said part of the play involved an issue related to ground squirrel removal, and that would be really tough for me, in all honesty.

7. If I come, I assume they’ll expect me to turn off my cell phone? Hey, who needs to get with the program here in the good old 21st century! Press the red hotline button to Patti LuPone if you have to, but I’m leaving my cell phone on. You might speak with Drew about that. If it’s the same guy I’m thinking of, he was way into technology, back when I knew him.

8. The show looks great, but the tickets are a little outside of my price range. For $15, I could get a cup of coffee and one or two of those tiny chocolate-covered graham crackers. So, I’ll have to see.

9. Didn’t anyone tell you about the weather here, ha ha?  (Ironic, I know, since Emma said there was that one touching scene in the play, about “where the squirrels go in the winter.”) I think it’s funny, or maybe sad — just like those theatre masks, I guess, funny and sad! — how your play happens to have coincided with a crazy run of weather. I’m so sorry there was that huge rainstorm opening night, and then the tornado — and all that mess after! — and it was freezing that one night. Thank god it’s so beautiful today! Of course, who would want to be inside on a day like today? Not even you, I bet. I feel bad for the actors, but I’m sure they’re just happy to be onstage, even if there is no air conditioning.

10. Thanks for the e-invite; I opened it too late to make it to last week’s performance. I guess there have been some very funny Facebook posts, too, Emma said!  You are always so clever, and you never worry about embarrassing yourself. I really respect that.

11. Actually, I’m not sure Emma liked the play that much, but I promise I won’t let that stop me! I love musicals, and you deserve huge congratulations for even attempting to create another one despite the fact that not too many people really make that their first choice in entertainment, or even in theatre. But bravo, and I can’t wait to see it, or give my ticket to someone who will! 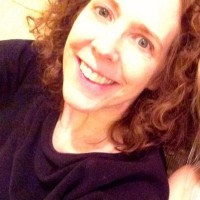 L.C. Bernadine is a Chicago playwright and lyricist who works frequently with composer Erik Olsen. Her plays include BORDERLANDS, recently produced by Underscore Theatre, and EVERYBODY'S A CRITIC, a new musical about the perils of judging and being judged. She recently completed a middle-grade novel (for which she is seeking representation) called Bella Vista.