Why Black Women And Men Critique Each Other

Morgan Jerkins’ previous work for The Toast can be found here.

In June of this year, writer Tamara Winfrey Harris released The Sisters Are Alright: Changing The Broken Narrative of Black Women in America. According to The Washington Post, Harris writes “specifically of black women, and taking care to avoid conflating the black male experience with the definition of the black experience, period.” In this pivotal cultural moment when black men’s lives are often the focal point of the Black Lives Matter movement, Harris’ work is important. However, Harris’ book was largely overlooked when a month later, Ta-Nehisi Coates’ Between the World and Me was released to widespread critical and commercial acclaim. Jay-Z tweeted that everyone in America should read it and even Toni Morrison claimed that Coates has filled an intellectual void for her since James Baldwin passed. This discrepancy in how we, especially black people, regard each other’s work is rooted in a history that often conflates blackness with black masculinity.

The fact is, Ta-Nehisi Coates is a part of a tradition where black men are at the forefront of representation. It’s not his doing but nevertheless, he’s inherited this patriarchal right as a male writer. Many of his predecessors derided black women. According to sociologist Calvin C. Hernton, in Ralph Ellison’s Invisible Man, the character Mary Rambo is symbolically portrayed as a mammy figure. In Richard Wright’s Native Son, Bigger Thomas’ mother and sister are depicted as weak and annoying pieces of work. Still, Native Son is seen as a masterpiece of black American literature. Yet how many of us have read Ann Petry’s 1946 novel The Street, published six years after Native Son, and focuses on the oppression that a black girl faces from white and black men? Historically, the black man has been the placeholder for the black experience. Black Scholar, the third-oldest U.S. journal of black cultural and political thought, released its first issue, “The Culture of Revolution,” in 1969. Every single author was male. Calvin C. Hernton writes in The Sexual Mountain and Black Women’s Writers, “Though black and white men stand on opposing sides of the racial mountain in America, they tread on common ground when it comes to the mountain of sex. Traditionally, the World of Black Literature in the United States has been a world of black men’s literature.” Little has changed in the decades since.

The criticism surrounding Ta-Nehisi Coates’ blind spot when it comes to black women sparked in the June 17th issue of The Atlantic. The story opened with “To understand race in the U.S. today, it’s Kalief Browder’s story, not Rachel Dolezal’s, that really matters.” Kalief Browder was a young black man who was held in Rikers for three years without a trial before committing suicide. While Browder’s story is certainly important, it might have been more fitting to compare Rachel Dolezal with a black woman instead. The specter of mass incarceration and police brutality affect black women as well as black men. BuzzFeed’s Shani Hilton wrote “Black womanhood in real life isn’t — as it largely is in Between the World and Me — about beating and loving and mourning black men and protecting oneself from physical plunder.” Writer Brit Bennett added to this argument by pointing out “Between the World and Me is a conversation between black men, and this conversation is vital, but the strength of the Black Lives Matter movement is that it calls us to participate in and create new conversations.”

What shouldn’t have to be repeated but is crucial to my argument is that black women are doubly oppressed. We suffer from racial injustice as well as from patriarchy. Oftentimes, when we read about ourselves in stories like Sandra Bland’s, we have to compartmentalize, even prioritize, our identities: our blackness versus our womanhood. Black male writers aren’t asked to do the same. They write about race through the lens of their gender, which, if they are not careful, can inadvertently cause them to think that their blackness erases the privilege they have as men.

While this problem does not solely rest on Coates’s shoulders, he’s the most prominent example and thankfully, he has responded thoughtfully to this criticism. In a Slate interview, he says, “I understand that it is the male experience and I am a male writing the book. I don’t know how to remedy that.” Initially, this response was enough for me. I don’t expect any black person, male or female, to write entirely about my experience. Such an expectation is too much of a responsibility for any writer to bear. Frantz Fanon warned about any attempts to homogenize black culture. In Black Skin, White Masks, he wrote “There is not merely one Negro, there are Negroes,” and as such, we should be encouraging multiple interpretations of what black culture can look like. But such a promise remains a dream when there’s a paucity of black women in journalism to begin with. Although this is a structural and perhaps even an ontological problem with the ways in which we perceive black women, with Coates’ immense clout and prestige, I have faith that he can help to remedy this situation.

In order to understand the further understand the magnitude of this issue, I reached out to a fellow black female writer, Stacia L. Brown, for more insight. “Neither The Atlantic nor The New Yorker have given contemporary black women writers/journalists the platform or visibility that Coates or Jelani Cobb have at those publications, and I’m not sure why that is, but it’s unfortunate,” she wrote. “Are astute, insightful, academic, eloquent black women just not on their radar? Similarly, when Coates’ wonderful book dropped, Tami Winfrey Harris did around the same time… It’s a great book, published by a much smaller press and fewer people are familiar with it. Harris has done an exceptional job marketing and touring with the book mostly on her own. But there’s an opportunity gap between the promotion of her book and Coates’ that simply shouldn’t exist.”

Writing this essay has filled me with fear. I’m a 23-year-old up-and-coming writer. I’m also a black woman who is criticizing a formidable figure like Ta-Nehisi Coates. I can only dream to have the career he has and I pray that one day I will. I am culturally conditioned to protect the black man at all costs, because to criticize him publicly could be seen as a form of emasculation. After all, black men already receive enough oppression from white men. Why should I drive the dagger in further? But I cannot remain silent when there are black women’s names that must be uplifted, who can be antidotes to our cultural amnesia of how they are producing great work. I love black men and the careers they build but I cannot blindly continue to do so at my expense as an artist too. Love is not synonymous with neglect of others. So, I lift up other black women’s names: Eve L. Ewing, Hannah Giorgis, Safy-Hallan Farah, Huda Hassan, Sarah Hagi, Jazmine Hughes, Collier Meyerson, Doreen St. Félix, Jamilah Lemieux, Morgan Parker, Stacia L. Brown, Rahawa Haile, Trudy of Gradient Lair, Feminista Jones, Ijeoma Oluo, Bim Adewunmi, Rebecca Carroll, Jenna Wortham, Ashley Ford, Nikole Hannah-Jones. I know I’m missing names because I’m bombarded with black female talent every day. There’s your treatment right there, and the list will continue to grow.

We must acknowledge that black male and female writers are working with two different wavelengths of consciousness. For the black woman, she is begging to be heard. Although she might not entirely depend on the black man to be acknowledged, it would be beneficial for black men to acknowledge how her gender is seen as a detriment whereas his own is a leverage. I believe black women often know black men more so than they know us because we are more confronted with their experiences while we exist in a different body. We don’t ask men like Coates to entirely change the system with their own might. However, they do have a responsibility to not only resist white supremacy but squeeze out the patriarchy that distances them from their black sisters as well. They have the power and evidently, they have the voice. It starts with urging national publications to create series around the mystique of living in the black female body and enlisting black female writers to explore this phenomenon. It follows with having more black women on staff. It continues with giving more praise to books written by and for black women. But our black men invoking our names while they receive acclaim catalyze this domino effect.

Without this, black women are relegated to being invisible concepts. We cannot envelope ourselves within the black male body all in the name of collectivism. Blackness is not entirely a male or female experience, but rather a metamorphosing and immeasurable idea that each of us has a share and stake in. 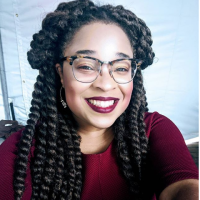 Morgan Jerkins graduated from Princeton with an AB in Comparative Literature. When she's not learning how to ballroom dance, she's working on an MFA in Fiction at the Bennington Writing Seminars.