A strange thing happened on October 8th. Commentary began to circulate about an interview with Chris Brown in the Guardian, propelled by the implications of an offhand reference he made to his own sexual history. Brown described his first sexual encounter at the age of eight with a teenage girl.

The reaction itself, originating largely from a Flavorwire response to the interview, arrived on a Tuesday, a full four days after the interview was published. The initial post and its responses were marked by a sort of dawning realization. Chris Brown had been a victim of sexual assault. It’s just that — partly because he was Chris Brown — no one had noticed.

To their credit, the writers broadly recognized the dissonance between the reaction (or lack thereof) to the revelation of what actually happened. What felt like a big deal somehow wasn’t. Flavorwire’s initial piece was largely focused on the enmity that Brown draws from the culture at large and speculated that Brown’s violent behavior and public volatility might have subconsciously originated in the abuse.

Colorlines wrote about the pitfalls of outing someone as a rape victim even when they wouldn’t necessarily agree to the characterization. Author and poet Olivia A. Cole characterized the self-erasure of male sex assault victims as a symptom of patriarchal culture.

Something that many of these writers touch on, but don’t fully explore, is the connection that’s evident in this case between sexual violence and gender. It’s a subject with which I am unhappily familiar. I was an undergraduate when Jerry Sandusky, a defensive coordinator for Penn State’s football team, was arrested and charged with 48 counts of sexual abuse, committed against boys he met and groomed through his charity work. The public reaction to the case was explosive, and rightly so. Toxic and systemic functions of patriarchal culture were laid bare – the use of the charity to target and groom disadvantaged children, the willful ignorance of Penn State’s venerable coach Joe Paterno and the deliberate aiding and abetting of the abuse by many in Penn State’s football administration besides.

While the public reaction to the scandal was one of uniform horror (barring perhaps a minority of delusional Penn State fans), reaction in the circles I worked in was muted. I was involved in campus feminist activism as an undergraduate: our groups organized Take Back the Night rallies, spoke to freshmen about violence, and fought the school administration to ensure our campus Women’s Center continued to receive funding. The work was important to me. I had come to feminist activism as a survivor. It was little surprise that my friends’ and colleagues’ reaction to the Penn State scandal troubled me the way that it did.

To a certain extent, the disconnect between mainstream public reaction to the case and those of the activists that I knew was rational and expected – we who knew the nature of sexual violence as a function of patriarchy and its true prevalence had moved beyond the point of shock from such revelations. Once the first accuser appeared we knew with some certainty that more would materialize. It made a terrible sort of sense to us.

But the knowing calm was underpinned with something troubling. It was something I had felt, like an itch, for some time. The everyday caution expressed around my male identity was evident and (I thought) largely justified, but there was a particular kind of tension that arose when I presented as an out survivor of sexual violence, a sense of disorientation. Their words were supportive, and I believe that they cared about me and my experience, but it sometimes felt as though I represented a paradox.

That conceptual frustration was later expressed in several articles asking how the scandal would have landed had the victims been girls instead of boys. On its face this was a legitimate question to ask. How would things had played out differently, if they had played out at all? But it felt to me as though, passed around on social networks by my friends and mentors, it served more as the release of a pressure valve than anything else.

It felt as though the parts of the feminist movement I was involved in were at war, caught between liberal (and to some extent, intersectional) notions of solidarity and collective advocacy, and radical notions of gender, patriarchy and structurally enforced power. That tension was most evident to me in sexual violence advocacy. The early and vital radical work around defining violence, through Mackinnon, Dworkin and others, was necessarily and essentially gendered: the victim as woman and the perpetrator as man, forever and for all time. This was the root of the confusion I experienced with my friends.

Perhaps unsurprisingly, my particular experienced has been nominally championed by so-called Men’s Rights Activists (a label that falls apart at the slightest inspection). Whatever imperfect ways feminist activists may have arranged support structures, the foundational argument of anti-violence radicalism remains relevant: Violence, sexual violence in particular, is both a function and an instrument of institutional power and privilege. This much appears evident. Whatever position it claims to take, men’s rights as an ideology rejects this tenet, and thus can never represent any sort of victim of violence. Their work is fundamentally destructive even as it claims to constructively advocate.

Conversely, the position of such advocacy within feminist work remains fraught. There are two typical positions: the first and most common is that anti-violence work as it is practiced now produces a trickle-down effect that benefits even those who aren’t necessarily represented by name or group. That “the patriarchy hurts everyone” is a refrain frequently heard among liberals, often in order to build a coalition around pre-existing work (that it makes less sense when placed in the context of lived privilege is a topic for another essay).

The rarer, and perhaps more honest position, is that anti-sexual-violence work isn’t meant for men and never really was, at least in the sense of advocacy. Men are still privileged; we must still take responsibility for anti-violence work among ourselves. But the inclusion of male survivors in the context of anti-sexual-violence advocacy is an awkward retrofit. The anti-sexual-violence movement, such as it is, was built over decades by female feminists, particularly radical feminists, particularly radical lesbian feminists, particularly around college campuses and other such places where safe spaces could be fashioned. The safe space, and its inherent gendering, was critical. Observe the history of any venerable Take Back the Night movement within a community and chances are good that it will have been women-only before a certain point in time, if it isn’t still. That fact speaks to the purpose of anti-violence work, as articulated through radical theory, as a specifically gendered movement.

This is not to say that the anti-violence advocacy is inherently flawed – indeed, the reasons behind the necessity of gendered safe spaces are intuitively reasonable. Leaving aside notions of “collapsible women,” the need for survivors to actively avoid triggers (which sometimes includes the presence of men), is a basic and vital function of the work. But when male survivors are introduced our problem becomes immediately clear. Some argue for a separate activist arm, for men and boys who have experienced sexual violence to rely upon each other. This is an idea that’s worth considering, but it may have been articulated too late. The broad rhetoric of the anti-violence movement has in large part already moved beyond the essential, in order to accommodate oppressed people outside of its initially narrow definitions.

Before I came to college I had barely any awareness of anti-violence advocacy in general, let alone advocacy among men. Women’s studies (and other critical studies departments) were essentially the only game in town, as far as entry into anti-violence work was concerned, but it was also the only shelter to be had as a survivor, the only place I could exist free of stigma and fear. Notions of a critical masculine study around which an autonomous advocacy might have formed was uniformly met with apprehension and scorn (and not without reason). The slow realization that I was in some ways an interloper in the place I felt safest was upsetting.

Independent advocacy isn’t an inherently lost cause – despite distrust from the wider advocacy community and high-profile failures like the Good Men Project, some modest resources continue to be available, in addition to those provided by generalist organizations like RAINN – but my personal situation, in light of the safe space issue, is untenable. As a survivor of male violence, the same reasoning that places me outside of feminist safe spaces makes the concept of a male-gendered safe space inherently inappropriate. I am left with no natural platform for advocacy. Perhaps that is the end of it. If there’s a solution to my dilemma, I have yet to find it.

The hypothetical gender-flipped Sandusky case represented among my fellows a visceral outcry against the perversion of their work, a reclamation of territory in a zero-sum game. There was a worry, not unfounded, that the Penn State case would dilute attention toward narratives of violence against women who desperately needed it. And yet, while simultaneously benefiting from male privilege, I have also never been embraced by the wider culture as a survivor. As Cole beautifully elucidates, sexual violence against men complicates the already narrow definition of what such things are. It puts the lie to a fabricated notion of what a male experience is and should be.

The feminists I worked with still could not contain my experience or that of the Penn State victims in its essentialist strictures. I have a great love of feminism, but so long as I am vocal as a survivor I exist as a troubling puzzle to traditional anti-violence activism. As I am, I continue to serve the way that privileged people ought to, as amplifiers for oppressed people, because it’s the right thing to do and there are other people’s lives at stake. But the network of feminist amplification is not reserved for me or those like me. Anti-violence work is an apparatus that I will always support but I do not expect it to support me.

My friends I can rely upon, but revolutionary advocacy does not consider me one of its first concerns.

Initially the measured and thoughtful response to Chris Brown’s admission struck me as odd, given all of this, but in many ways Chris Brown is a “safe” victim to consider. That Brown was victimized by a woman, in an abusive context that many consider to be technical or statutory rather than “actual,” marks him as a case that can be analyzed without confusing vital notions of gendered violence. There is little dissonance to be resolved in that respect. I hold hope that greater adoption of intersectional feminism(s) could, in some possible future, reduce this fundamental discord.  But for now, I — and others like me — remain problems to be solved, rather than assets to the cause of ending sexual violence. 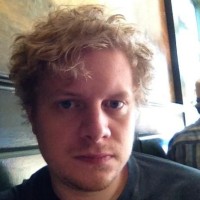 John W. Thompson is a graduate student at the University of Colorado at Denver. He lives there with his houseplant and record collections.