Esmé Weijun Wang’s previous work for The Toast can be found here.

AUTHOR’S NOTE: Disability insurance companies often employ tactics such as monitoring social media and sending private investigators to follow claimants. Innumerable claimants who suffer from “invisible” disabilities such as fibromyalgia and chronic fatigue syndrome (ME/CFS) are observed and discounted due to these processes.

This woman is clearly not disabled, but I followed her around anyway just to make sure. Because I am very thorough at my job, and because that is why you pay me the big bucks.

It was confirmed that Wang resides at 123 ***** St., San Francisco, CA. She does not appear to drive. Wang was seen walking to several neighborhood locations, including a frou-frou “boutique market” that sells, among other things, expensive sardines, as if anyone would actually want to eat sardines, let alone expensive ones.

And by “several” locations I actually mean two locations, but Wang exhibited no signs of pain or movement restrictions while locomoting to either location. She used no cane, wheelchair, or walker. She looked normal. In fact, she looked pretty good. Several times I wanted to tell her that her tight pants were very appealing, but then I remembered that I am a paid spy.

Pursuant to Lymetown National Insurance request, I commenced surveillance of E. Wang, 123 ***** St., San Francisco, CA, to determine her current activities due to her claim of disability stemming from Lyme Disease and fibromyalgia. (That in itself should render the claim void, should it not? I read a few articles online that indicate that these so-called illnesses don’t exist. I am not arguing with Lymetown Insurance Company about this matter, because again, I am receiving the big bucks to follow people, but should the client wish to read the articles I mentioned, I can go through my browser history and attach some links.)

The Wang residence was in well-maintained condition. The front windows were shielded by white curtains, and displayed a window box full of what may have been flowers at some point. I thought that they were dead flowers, but they could also be some form of exotic succulent; I do not know much about botany.

Surveillance afforded an excellent view of the front of Wang’s residence.

An individual, described as:

Female/Asian, age 30-35, 5 ft. 6, 120 lbs, slender, light complexion, short platinum hair, believed to be E. Wang, and hereafter referred to as the subject, exited the house from the front door and walked down five steps to the sidewalk.

She then walked across the street to the aforementioned “boutique market.”

The subject did not seem to be hampered physically in any way. For example, she did not grimace or wince a single time while under observation. She was observed in the boutique market looking at the expensive sardines, despite ample data that indicates the disabled population only eats the bare minimum to stay alive, due to living an inevitably miserable existence.

Observation indicated that the subject was seen laughing and smiling while conversing with the employee who rang up the subject’s latte.

No grimacing or hobbled movement was noted.

Because the subject had not emerged again, and because I was admittedly bored from sitting in a car for eight or so hours, I checked the subject’s Instagram account. I observed two Instagram updates (11:52 AM, 1:33 PM) of the subject lying in bed, which smacks of laziness. I mean, geez—I’d like to lounge around, too, but it’s important for me to do work that really means something.

The subject did not exit the house again until this time. Subject emerged from the residence with a small brown dog.

She again walked down the five steps, again without grimacing or hobbling, and spoke some sweet words to her dog before walking down the sidewalk to the corner. Those sweet, sweet words are not documented here because I was so moved by them that I cried a little before continuing to observe the subject.

The dog defecated beside a tree. Subject removed a bag from her pocket, bent down, and picked up the feces with the bag. I found this somewhat disgusting, but dutifully watched the entire event from start to finish in case the subject did something else that would indicate her lack of disability, such as expressing that she has a nice life or running a marathon.

Subject returned to her residence with the dog and the bag of feces (gross).

This concludes the work authorized by Lymetown Insurance Company. Should the client desire, we can further document Wang’s activities. I would, in fact, be more than happy to do so, because I like following women.

As I’ve said before, the subject did not seem to be hampered physically in any way. Also, she looked normal.

There was no indication that the claimant’s so-called “illnesses” constitute disability, as I was not able to witness symptoms of fatigue, joint pain, chills, uncontrollable sweating, low-grade fever, muscle pain, headache, or stiff neck.

Finally, I was not inspired by anything she did, which is, I am given to understand, the whole point of disabled people. 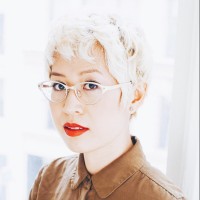 Esmé Weijun Wang is a writer and advocate. Her debut novel, The Border of Paradise, is now available for pre-order.