My Only Carriage: On Naming a Nameless Disability

Before I saw the man’s body shake, I saw his shopping cart shake. He’d pulled out the child’s seat and put three folded shirts there, all striped through three different colorways. The belly of the cart was empty, and so I looked at his arms. They held his hands awkwardly, palms pushed forward, like a child getting ready to push up his shoulders and say Idon’tknow. Then I saw the hands themselves, their fingers and thumbs curled around the cart’s handle. The knuckles were small and white circles. I zoomed out, like a camera, looking at more of him. I saw the orange expanse of his top, then his jeans, which were the kind of blue that’s either faded or pre-washed. And without seeing his actual knees, I knew that his actual knees were actually locked. I knew he was afraid that he would start shaking. That he wouldn’t be able to stand up or still or straight. That he would fall, right there in the returns and exchanges line, right next to the Coinstar machine telling us in its bold yellow way that it had coins to the power of more.

I knew, in other words, that something had gone wrong in his body and he was working very hard to make his body look normal. I knew this because I was also standing with my actual knees actually locked. I knew this because I was afraid that I wouldn’t be able to stand up or still or straight. That I would fall right there in the return line and next to the Coinstar machine with all of its coins to the power of more. In other words, something had gone wrong in my body. I always work very hard to make my body stand up and still and straight, so I knew what he and I were doing. We were in our heads, talking to our bodies. In our heads and saying to our bodies, keep still keep still.

After the Coinstar had stopped it song, the shaking man and the shaking I made our returns and exchanges and then moved through aisles at different parts of the store. I looked at the cereal and he looked at, say, canned beets. He reached, say, for the artichokes and in-his-throat hummed Bob Marley’s “Don’t Rock My Boat.” I looked at the Greek yogurt and in-my-throat hummed Björk’s “Human Nature.” I in-my-head sang along, but I used the wrong lyrics. I used Madonna’s but I’m not sorry, it’s human nature instead of Björk’s there is no map to human behavior. I wondered what the shaking man was saying to his body. I wondered if his body was saying to him, like my body was saying to me, Idon’tknow Idon’tknow.

Because it is impossible, using a shaking body to buy groceries. What do you do when the Rice Chex is on the top shelf? You have to let your hands do what your hands do, and in that moment, you know fear. You taste it, flat and chemical, at the back of your tongue, the worst kind of penny. You lock your knees and you tell them keep still, keep still. And sometimes they do and you’re smiling, nodding at the straight line your legs make. And sometimes they don’t and you’re holding the shelf and the cart and you’re praying, you’re trying to focus on the boxes of cereal, you’re trying to do just this one small thing. The world narrows to you and a line of cereal boxes and the children’s faces on them. They’re looking at you and they’re smiling, holding spoonfuls of cereal. Their hands never, never shake.

In the parking lot, I looked at myself in the portrait my car window painted out of reflected light. A truck pulled into the next parking spot. The truck was the kind of not-quite-color Crayola called Flesh Tint, then Pink Beige, then Peach. The truck was driven by a man wearing a crocheted rastacap with four colored stripes: Flesh Tint-Pink Beige-Peach, Forest Green-Green, Yellow-Yellow, Brick Red-Red. He was listening to reggae music and because he enjoyed it, he nodded along. His cap nodded with him. I nodded with him and his cap and I smiled at them both, which in that moment was a way of saying, I too enjoy reggae music, I am afraid I forgot pudding cups and Tylenol, I am afraid of everything, are you afraid of everything too?

I don’t know why I took my body after it. I had already gone shopping, so I didn’t need the list. But I felt embarrassed. I didn’t want anyone to see any of the things I might need. I stood two parking spots over with the toe of my tennis shoe on the shopping list and thought for a minute that I was very glad that I had kept my secrets. But my name wasn’t on the grocery list, and though many people could at some point be in that parking spot, very few of the people who could at some point be in that parking spot could also recognize my handwriting.

As long as I have had a body, my body has moved in strange and complicated ways. It shook and fell and shifted in ways I didn’t ask it to. As my body became larger and older, it became stranger and more complicated. It tripped and tumbled and stumbled and stuttered and stuck. Its arms flapped numbly, its feet felt fire and needles, its vision blurred and unblurred, its skin felt and unfelt.

By the time my body was twenty-five, I would sometimes in-my-head tell it to move and it would tell me no. It would stumble. It would trip. It would weaken or numb itself, or fire and tingle and pin and needle; it would send electric-feeling beats of fire and tingling and pinning and needling through its arms and hands and legs and feet, as though something inside my nerves was dancing — as though something inside of my nerves was singing, My feet is my only carriage, so I’ve got to push on through, but while I’m gone, I mean, everything’s gonna be all right.

And so I took my body to many doctors who asked my body to do many things, like using its hands to push their hands away and feeling the needles pressed into its skin. My body said no, and so the many doctors put my body into many MRI machines so that they could use magnets and radio waves and computers to make a picture of the inside of my body. Because they had seen the outside of my body move in many wrong ways, they expected to find many wrong things inside of my body. They expected to find lesions on my brain and spine. In other words, they expected the images to confirm that I had Relapsing-Remitting Multiple Sclerosis, as my patient history and neurological exams suggested.

The images did not confirm that I had Relapsing-Remitting Multiple Sclerosis. And so my many doctors pushed up their shoulders, like children saying Idon’tknow, and sent my body to other doctors.

I took my body to eight years’ worth of doctors before finding a neurologist who found that the thing that went wrong inside of my body isn’t exactly wrong. It isn’t incorrect. It isn’t singing the lyrics of “No Woman No Cry” to the tune of “Don’t Rock My Boat.” It isn’t the answer “Madonna” to the question “Who is on the quarter?” It is moreso something that is missing. Or, instead, something that never arrived, like a postcard mailed to Canada with only one American Forever stamp. It is, metaphorically, a series of missing stamps. It is, literally, a series of holes in my spinal cord.

Here is one thing that human beings have in common, whether or not we like reggae music or know the right words to songs or become very afraid when the wind takes our grocery lists: when we are embryos, our spinal cord isn’t a cord. It’s a postcard-flat sheet of tissue. When the human body begins to change from embryo to fetus, this postcard-flat sheet of tissue begins to roll into a tube. (Think of the magazine you once rolled up to use as a telescope when you were a child. The Thanksgiving issue of Southern Living magazine you rolled up and put to your eye so you could look through all of that orange and say, “Argh argh” like a pirate.) This tube looks like a canal and channels cerebrospinal fluid through the center of the spinal cord, which is called the central canal. The central canal of most human bodies closes completely as the human body becomes larger and older.

The central canal of my human body did not close, even when my body became larger and older. At least not completely. Not correctly. And so there are all of these holes inside of it, all of these very small holes, like the empty spaces in the crocheted yarn that became Rastacap Man’s rastacap.

But the more that doctors used magnets and radio waves and computers, the more they matched up the pictures of a person’s body and the things that went wrong when that body moved — the falling, the dizzying, the clumsying — the less incidental the holes became. The less small. The less harmless. And so, after eight years’ worth of doctors, I found a neurologist who found these holes inside of my body and realized they were what had gone wrong.

The word “reggae” started out not as a real word, but as a description of the sound that an organ and a guitar made together — a term used to channel the feeling of a series of sounds that were not adequately described by already-existing words.

There’s no word for the thing that has gone wrong inside of my body, and so my neurologist uses phrases to describe the series of missing and wrong things in my spine and the feelings and not-feelings they make in my body. He uses phrases like “symptomatic dilated persistent central canal.” Each word drops, meaningless as a penny, onto and into my body. I nod.

After my neurologist explained that this series of holes explained my series of symptoms, I walked to my car with my head down so I could watch the ground; so I could ready myself for shifting, for shaking, for falling. I was looking at my phone as an excuse for keeping my head down, an easier way to explain what the people who saw me might be in-their-hands wondering. When I felt certain that my body was steady, I texted a friend: So my body is messed up because there are holes in my spinal cord?

And then my friend texted: SPINEFLUTE. And I knew we were moving through different places in different kinds of light in different states and both looking at our phones and laughing, guilty-laughing, at the language we had made.

If my spineflute played music, I would want it to be reggae music. I would nod and nod along. I would push on through. I would make the fire burning through my arms and legs a light. 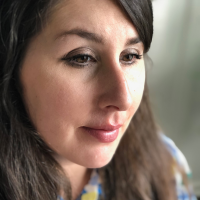 Emma Bolden is the author of two books of poetry -- Maleficae (GenPop Books) and medi(t)ations (Noctuary Press) -- and has a cat named Gertrude Stein.