Moby-Dick and Me: A Teenaged Love Story

For various stupid and convoluted reasons, I once had to get an official name change so that my ID and passport would match. While at the registry, I asked if it would be a problem to add a new middle name. “Middle names don’t matter,” I was told.

I briefly thought about adding all of my sisters’ names as my middle names, in proper weird sibling prank fashion. I also thought about “Jam”, “Danger”, and “Kanye”. When I reached for the form, though, the right name came easily, without me having to think, as if it were already mine — a name that had been firmly stamped on me two years before.

When I was sixteen, my family moved 450 miles from Adelaide to Melbourne, and I read Moby-Dick. I wanted a high school experience resembling one in an indie movie (think Petra Collins’s photographs or Brick starring Joseph Gordon-Levitt). I was miserable, so I wanted misery to be part of it — it will come as no surprise that The Virgin Suicides and its dewy-dawn light had a major role in my preferred teenaged aesthetics — but I also wanted there to be friends, conversations late at night, underage drinking, a car or two, waking up hungover in the football field. Misery in high school is fine if you cast it in this nostalgic light, already a sweetly tinged memory as it happens. I suppose I wanted to be a teen dirtbag — I want, even in hindsight, to be able to tell those stories about being sixteen and wild.

What I got, and have, was Melville.

And yet: aged sixteen, I had never before read anyone who understood the particular kind of fury I felt — a fury that felt like being a teenaged girl, and being young and queer, and being hated. There was something in everyone in that book that I loved and recognised: Ishmael’s transformation — his neediness and then “cool collected dive at death”; Queequeg’s skill; Starbuck’s terror.

And in Ahab, I found the kind of madness — almost completely forged of anger and bitterness — that I understood instinctively. Ahab is the least interesting character of Moby-Dick, but his deranged temper and violence subsumes the book, touches everything in it. His obsession with his own unhappiness and his own moment of being wronged felt, to me, uniquely comprehensible and familiar. I was sixteen: I held grudges.

It helps that Ahab’s fury is not anchored to his character alone. It pervades the novel. The sheer savagery of his feeling wasn’t just relatable; the first time I read it, eight hours curled up tight in a car with a box lid flapping on my head, I felt Melville could have written it about me. Moby-Dick’s unhappiness, Ahab’s madness, is a particular kind of unhappiness and madness that made sense to me as a teenager: it is fixated and then flighty, moody and self-conscious. It’s also very, very funny. Often it’s all of this at once:

Whenever I find myself growing grim about the mouth; whenever it is a damp, drizzly November in my soul; whenever I find myself involuntarily pausing before coffin warehouses, and bringing up the rear of every funeral I meet; and especially whenever my hypos get such an upper hand of me, that it requires a strong moral principle to prevent me from deliberately stepping into the street, and methodically knocking people’s hats off – then, I account it high time to get to sea as soon as I can.

For me, Melville was a revelation. I was smart enough to know that “nobody understands me” was a teenaged cliche, and lonely enough to feel the full depths of it. And then I met Melville, and he already knew me inside and out and sympathised: badly, and with frequent misogyny, and in a way that wasn’t at all comforting — except in the way that it is always comforting to meet someone who is made of the same stuff as you. Melville knew what it was like to be lonely. Melville knew the kind of sadness I knew: something boring and slow and utterly lacking in solutions or self-care.

I would up heart, were it not like lead. But my whole clock’s run down; my heart the all-controlling weight, I have no key to lift again.

The despair in Moby-Dick is interpreted as adult despair — more than that, as adult male despair. But anyone who has weathered five years of a miserable high school experience, with all the confusion of sexuality and friendships (often tied together), will be able to see themselves in Moby-Dick. The book is about creating close ties — the romance between Ishmael and Queequeg, the kindness they show to one another — and then watching them drift. It’s about bodies, and the failures and the disorder of bodies. It’s about as many people as you can imagine in very close quarters, not trusting each other.

And Ahab’s madness was not mad at all, at least as seen through my calmly desperate teenage-self’s eyes, but instead the coolest kind of logic: If you are that sure you’re missing something, why not go out to get it back? Why not go out to kill a whale?

When I first read Moby-Dick, I didn’t know some of the things I know now, the reasons that keep me over-identifying with him year after year. In a way it didn’t matter — I felt them all the same — but it was rewarding to have the secrets come out as I continued to study Melville in university.

Most particularly, I didn’t know about his sexuality, which has been debated and wrestled with over decades, but which probably amounts to him being gay, and tormented over it. Melville wrote Moby-Dick in hopeless, unrequited love with Nathaniel Hawthorne, in a way that is painful to read. He wrote long letters to his friend that basically follow the lines of: I was reading Plato!! You know how he talks about how people were separated from their soul mates and are doomed to wander the earth forever, incomplete until they find the other? Isn’t it super great that we found each other! The compass in your heart is a divine one and mine swings to you!! Lots and lots and lots of love, Herman, while Hawthorne wrote back staid monogamous heterosexual tracts about the hills.

Melville’s queerness influenced most of his work in a way that I didn’t recognise when I first read it, except perhaps on some basic, instinctive level — in the way that I was also gay and lonely and most likely in unrequited love again. James Creech wrote about this in his reading of Melville’s Pierre in Closet Writing/Gay Reading, drawing attention to the fact that many critics have managed to somehow ignore the overt homosexuality of much of Melville’s work:

One has to fall back on a caveat like “some of us” because, indeed, some readers might not see the wink or share in the secret awareness that it both constitutes and acknowledges. If they do not, the text may do nothing to inform them. On the contrary, it is because there are readers like them that the text resorts to the camp wink in the first place. It is much like cruising. If the object of interest does not recognise that he is an object of interest, then he is, in fact, uninteresting.

I like Creech’s idea of Melville’s wink. But for me it was something even sweeter and sadder: reading Moby-Dick and feeling Melville look back at me and nod in acknowledgment. It was similar to the way I felt about the furious unhappiness I read of in Moby-Dick. Sexuality in Melville’s work is an uncomfortable experience, constantly worried over.

The novel was mine. It made more sense to me than any well-meant high school sex ed class, more than any romance novel I furtively read when my parents weren’t looking. Sex is never explicitly mentioned in Moby-Dick, but it’s there all the time, to be sniggered over or — more frequently — hurriedly backed away from. Yes, I thought when I was sixteen. That sounds about right. And the fantasies that Melville nurtured were the same ones I wrote about in a journal where I imagined having a girlfriend who would rub my stomach when I had period cramps — transgressive in their queer domesticity:

Be it said, that though I had felt such a strong repugnance to his smoking in the bed the night before, yet see how elastic our stiff prejudices grow when love once comes to bend them. For now I liked nothing better than to have Queequeg smoking by me, even in bed, because he seemed to be full of such serene household joy then.

Sometimes I still wish I’d had that high school experience that so many people make stories from, something flawed and brilliant at once, something filled with dramatic sadness involving a boy. But I don’t have it. Instead I have Melville, and Moby-Dick, which is enough. And I have my name.

My middle name is a little embarrassing now. Sometimes I pretend I was tipsy when I chose it, or roll my eyes at my own teenage melodrama. Mostly, though, I enjoy filling in my name on forms — Mikaella Melville — and tipping my hat to my old friend. 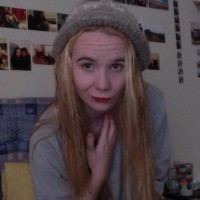