“I never asked for this”: On Adoption, Luck, and Thankfulness

Other posts in The Toast’s National Adoption Month series can be found here.

I took my daughter to the zoo on one of the first days of spring. It was a beautiful day in Houston, the weather still dry and airy, like there is little between you and the sky. Before the humidity kicks in, my now fellow Houstonians tell me, we have these stretches of perfect clear spring that remind me a lot of New England autumns, except with flowers for color instead of leaves.

The zoo was practically empty. My daughter had the place to run around at will. She has developed a relationship with the elephants: one-sided, to be sure, but we must always visit her elephants and see how they are doing, how the babies have grown. The Houston zoo can be somewhat idyllic, when it is uncrowded and the animals seem more at peace.

My point is not to describe the zoo, though, or the weather. It is to describe the kind of day that it should have been, or, rather, that it was. This kind of day used to speak straight to my heart. As a boy I would lie out on my driveway on nice-weather days and stare up at the sky, watching the fluid in my eyes shift against the blue sky, so that I felt both inside and outside of the world. I felt at peace then. Or I would climb out of my window and onto the roof of our garage and breathe in the good air. I would drive down to the town park and go up and down an abandoned road where you could see far off on both sides and pretend you were on one of our nation’s great roads. I would climb out onto the side of the brook behind our house and lie where no one could see me, with the rocks cool against my back, listening to the water and watching it pass beneath me. When I was in Korea for the first time since my adoption, I found a rare patch of grass on top of a hill where a school stood and would climb up there at night and look at the stars above the line of the white noise, sometimes long past midnight. That is what kind of person I am; I was.

In the zoo with my daughter there was a moment, a moment like the ones I used to appreciate, when I knew everything was perfect and I should have enjoyed myself, but couldn’t. I couldn’t enjoy the peace like I used to. I couldn’t feel how great it was to be there with my daughter, how lucky I was, how what we were sharing was something rare and special. I knew I should have that moment of peace; I wanted to have it more than anything, especially after a difficult first year in my PhD program.

Later I told my therapist how demoralizing it felt that I couldn’t fully appreciate this daddy-daughter time. I feel selfish enough already — to steal time to write, to have moved my family to Houston, to have moved my wife to America. My therapist wondered aloud whether it was because I feel in debt to my family that I couldn’t enjoy a moment where I wasn’t paying anything back. I don’t think I had ever thought actively about the idea of being in debt and what effect that might have on appreciation. Maybe, she said, you couldn’t enjoy that moment with your daughter because you felt as if you owed her something more.

It was unusual for her to speak. Mostly she waits until I get back to talking about adoption. Of course—adoption. There was a long silence while I tried to work out the idea of being in debt. How do I react to feeling in debt to someone’s love?

For adoptees, gratitude and luck can be trigger words. We are told so often that we are lucky to have been adopted. We are told this and what it means on some level is: someone rescued you from your shitty situation, so show your appreciation. We are told, sometimes very directly, when we do not seem grateful enough, to know our place. We are called “angry” as a dismissal. The worst insult people hurl at adoptees is that they are “ungrateful” and should “go back” (to their “own” countries, to their old families). That is the moment when adoption becomes a gift—because that is the moment when it becomes clear that adoption belongs to people like the adoptive parent and not people like the adoptee. We shouldn’t want our birth families, our birth cultures. We should be thankful for being taken from the mothers who bore us. This idea of gratitude can ruin thankfulness. Why should we be grateful?

Adoption has such a huge effect on how I see gifts now. If I am given anything, and then it is taken away, I go into meltdown. If I am expected to be grateful for anything, I would rather not have it. I don’t want to feel in debt. I find it hard even to write the word grateful in an email. I feel both overly thankful for any offer, for any help, and yet extremely stressed out about having to pay it back. I want to leave no loose ends. I don’t like writing thank-you cards. I don’t like it when someone buys dinner and expects a future meal in return.

It stresses me out that I have not earned back my debt with my wife and daughter, and yet I know that gratitude itself would go a long way toward earning anything. Gratitude alone, I mean, might be enough for them, but for some reason it isn’t enough for me—or it’s too much.

My first thought after that session was, in fact, to ask my wife not to make me feel indebted to her anymore. Of course I knew this was the wrong way of doing things. It is a problem of mine, not of hers. I thought hard about what this realization could mean, wondering how to feel thankful without also feeling as though I have to pay something back. It is a simple idea—that without a sense of owing, gratitude can be appreciation—yet that idea is something I have lost track of. It can be difficult to stop thinking of our current lives as being at a permanent advantage to our old lives. How do we do so, when loss and gain are involved? How to think of thankfulness as a choice?

It is something that is so clear in my daughter, when we are at the zoo and she points at the elephants and says, “That is the daddy elephant, and that is the Grace elephant,” or the giraffes, or the rhinos, or so on. We must decide for ourselves what to be thankful for and why. I chose to ask my family to move, and my wife chose to support me. Resenting the choice isn’t respectful of myself, or her, and neither is thinking of the choice as without agency, as adoption is for the adopted person. I have to remember that we have gotten away from the luck of someone else’s choices, and on to whatever luck comes from our own—and that is something to be most thankful for. 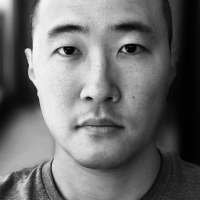 Matthew Salesses is the author of The Hundred-Year Flood. He has written for NPR Code Switch, The New York Times Motherlode blog, Salon, the Center for Asian American Media, and The Good Men Project. Follow him @salesses.