Sometime during middle school a male relative told me that if I weren’t in a wheelchair, I’d be “tall, thin, and gorgeous.” He meant it as a compliment, and I took it as such. Even as my throat tightened and my palms tingled with discomfort, I thanked him. Because I knew could have been was the closest I’d ever come to beautiful so long as I used a wheelchair. Since I was never getting out of it, the best I could hope for was an acknowledgment of wasted potential.

I mention this to give you a glimmer of the personal context I brought with me to Kylie Jenner’s photo spread in the December/January issue of Interview Magazine. In two of the pictures—one of which is the cover—Kylie wears a black leather bustier and a vacant expression, sitting with legs slightly spread in a gold-plated manual wheelchair. Kylie, if you somehow aren’t aware, is abled. She doesn’t use a wheelchair, at least not outside fashion shoots.

These pictures are just the latest example of using mobility aids as props. In some ways, I can understand how and why this happens. After all, wheelchairs are objects like any other, right? People pose with props all the time, so a wheelchair should be no different. Except that certain objects, like wheelchairs, are imbued with meaning. Wheelchairs have very real and fraught societal, historical, and personal contexts, and to ignore that is to contribute to ableist oppression.

Perhaps the most galling component of this photo shoot (and others like it) is that posing in a wheelchair while abled is seen as edgy, provocative, and sexy while actual wheelchair users are wholly and continually desexualized by society. Our bodies are seen as broken, strange, and ugly, and our wheelchairs are seen as prisons. These beliefs aren’t even particularly well-concealed. We are either “confined to a wheelchair” or “wheelchair-bound”. When we’re allowed to exist in media, we’re tragic inspirations or disgusting villains. We are things to be pitied and feared, nothing more. We are not attractive, and we are certainly not sexual.

But Kylie? Well, her body is beautiful. More importantly, it’s functional. When Kylie sits in a wheelchair, it’s a statement—a statement of what, I’m not sure. Although given her comments in the accompanying interview about feeling “limited” and Interview Magazine’s statement that the shoot’s vision was about “placing Kylie in a variety of positions of power and control,” one can assume the goal was to emphasize Kylie’s perceived objectification and presumed powerlessness through the use of the wheelchair and doll-like styling. But that concept relies on an abled gaze to work. It assumes the audience believes wheelchairs to be limiting, to be proof of powerlessness. Placing Kylie in a wheelchair while looking like a kinky Stepford Wife does nothing to critique those assumptions. In fact, it reinforces them. The photographs play off the juxtaposition of Kylie’s conventially attractive and abled body with the shallowest trappings of disability, knowing that an abled audience will thrill at the beautiful being cradled (quite literally) by the disgusting veneer of disability.

It’s important to understand that this isn’t just about these pictures, though. This is about the myriad ways disabled people are shut out, dismissed, and detested because of our disabilities while abled people profit off of and are lauded for playing crippled. This is about how disabled models have to fight for work and respect in the fashion industry, and how even when they’re successful, it’s framed as being because they’re an aberration—the exception that proves the rule. This is about the lack of respectful represenation, not just on screens and on the runway but in the room where decisions are made.

This is also about how disabled folks are more likely than their abled counterparts to be raped, sexually assaulted, and domestically abused. These are complicated issues, of course, but I argue that the desexualization of disabled people (which is a form of dehumanization) in one contributing factor. It makes an already vulnerable population that much more easily exploited, controlled, and abused.

Nothing happens in isolation. When Interview Magazine chose to photograph Kylie Jenner in a wheelchair, they chose to contribute to a history of oppression. They chose to treat a wheelchair as a prop, while wheelchairs are our mobility, our freedom, our agency, our identities. They chose to ignore the context, to dismiss the harm they caused, and to deny their responsibility for that harm.

It took me years to start shaking off the belief that my wheelchair, my disability, the very reality of my body made me automatically undesirable. I still wince when my wheelchair is visible in pictures. It still feels like a victory any time I find myself attractive. I still mostly don’t believe anyone else ever will. Seeing Kylie wear an illusion of my reality, knowing that she’ll be praised and defended while we shout our pain once again, preparing myself for the next time this happens (and there will be a next time), is frustrating and exhausting.

But I’ll keep shouting. You’ll hear me again next time. And again after that. If for no other reason than the hope that if we’re loud enough for long enough, maybe the next generation of disabled girls won’t have to demand their humanity. Maybe they’ll be given it freely, the way we all should. 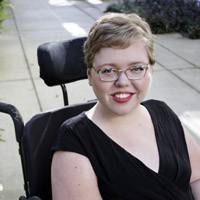 Kayla Whaley is co-editor of Disability in Kidlit and a graduate of the Clarion Writers' Workshop. She specializes in being way too earnest on the internet.