Mackenzie Mays’ previous work for The Toast can be found here.

It was 1951, and she knew she was pregnant. Well, at least she thought she was.

David – she still remembers his name – slid closer to her and placed his clammy hand on her thigh. He lightly patted her skin that was, thankfully, protected by her stockings while she stared out the window, waiting for it to be over. She sat rigid, her teeth clamped together tight, until the leg patting was over. He got off the school bus and she welled up with tears preparing to tell her sisters what had happened: that she had been impregnated on the bus, at age 16, against her will.

Her sisters giggled. They explained that while she was indeed virtuous, she wasn’t the Virgin Mary. You can’t get pregnant without having sex, Anne. He didn’t even touch your you-know-what, Anne.

My grandmother, now 79, knew very little about sex growing up. My great-grandmother had only told her enough about it for her to know that it was dirty and something you only do with your husband – and not until your wedding night, of course.

She grew up in Appalachia, often in church, and always on eggshells. She’s still soft-spoken and obedient, having learned somewhere along the way to keep her head down, but at the same time, strong and independent. A resourceful, take-care-of-it kind of woman.

She first got pregnant (for real this time) when she was 22 with the only man she’s ever had sex with. She married my grandfather when she was 20, following a quick courtship that started at a carnival – just like the movies. A lack of sex ed would again cause pandemonium when she contracted an STD from my cheating grandpa, but that’s another story – and less like the movies.

When the FDA approved birth control pills in the sixties, my grandma had two children and was one of the first in line. A. She didn’t want any more kids and B. She had heard that the pill could help relieve the incredibly severe periods that made her sick with pain and interrupted her life.

But she was nervous about actually going to the pharmacy to buy them.

“I guess what people were thinking about the pill was that it must’ve meant you were having sex…and not to make babies,” she said.

Had she not been married, she would’ve gone out of town to buy them out of fear that someone may see her. Even as a married woman, she had anxiety about it, but had a few friends to tag along.

She had two more children. Then she tried again.

Her doctor denied her, and then another did, too. They said that it could be done, despite minor health concerns about water retention, but they weren’t willing to take the risk – not for something as unnecessary as the pill.

She wanted them desperately. Her life was one that could not afford any physical interruptions like a pregnancy or debilitating period. She caught the bus Monday through Friday to and from her job as a receptionist at a now defunct soda company. (She still ranks the time, after working all day long, when she came home to discover a massive dried bloodstain on her slacks as one of her most embarrassing moments because “all the men I worked with were too immature to tell me.”)

She had four mouths to feed with no help from her husband, who was diagnosed with a disease that left him essentially bed-ridden around the time he turned 40. She took care of him, bathed him, even though by that time she admittedly didn’t like him much. She made sure there was enough money for bread and bologna and shining white tennis shoes. It may sound petty, but she says a nice pair of shoes can go a long way. If you can create a façade that you’re not poor, it really makes it easier to be poor, she explains. You worry less about your kids being picked on or their teachers feeling sorry.

Finally, at the age of 32, someone agreed to give her a form of birth control, but not the pill she wanted.

“They called it The Loop then. They insert in you. So I said, ‘Well do it. I don’t want any more children. I have four,’” she said.

The Lippes Loop was an original version of the IUD we know today. It’s also one of the reasons today’s IUD sometimes get a bad rap.

According to the International Journal of Gynaecology and Obstetrics, in a study of 1,000 women from 1967 to 1969, 15 had to have the Loop removed because of severe uterine bleeding. Another 25 got pregnant, and others experienced ruptured fallopian tubes and enlarged ovaries.

In my grandma’s case, after a few years of semi-success, The Loop caused an abscess in her right fallopian tube.

“When it abscessed, I looked like I was pregnant and I wasn’t, ya know? So I said, ‘Well take it out.’ And my doctor at the time said, ‘Well I didn’t put it in there and I’m not going to take it out. I don’t believe in foreign things in women’s bodies,’” she said. “So I had to find another doctor again.”

She found a doctor to remove the Loop and also one who agreed to prescribe her the pill if she agreed to watch her sodium levels.

“I promised not to even eat a saltine cracker,” she said.

But the pill didn’t fix what would be described to me today as nearly 15 years of “female trouble.”

Once, she bled nonstop for eight months straight. She wore a pad every single day. “It was worse than any pregnancy,” she said.

One hot day in the ’70s, her pelvic pain was so bad that she was laid out on her living room floor, carefully exhaling and stifling moans of pain to avoid scaring the kids, when her mother stopped by. She remembers my great grandma praying over her, asking for some sort of healing. The next day, she was on a new mission: to get a hysterectomy.

More than one Man Doctor laughed. No way. At 36, she was too young for a hysterectomy.

“The group of doctors would get together and decide whether or not you could have it. It’s not like now,” she said. “You just weren’t allowed to choose a lot of things at that time.”

By now, she had become wary of doctors – at least when it came to her lady parts.

Once, her gynecologist had forgotten about her while she was still in the stirrups. Legs suspended in the air, paper gown stretched tight across her knees, spread eagle. She didn’t have time to wait there any longer. She had things to do. So she waddled out into the hallway, clanking like the tin man and pried apart by metal. Something came up, they said. So sorry.

She eventually found someone to give her a hysterectomy, though it took some begging.

On the big day, she asked for a partial procedure – to keep her ovaries and cervix. But she woke up from surgery with nothing.

She said okay, fine, at least she doesn’t have to deal with her uterus anymore. But she worried about the stories she had heard about the effect a total hysterectomy can have on someone, both physically and mentally. She knew women who suffered afterward – their hormones out of whack, accompanied by a feeling that they were now somehow less of a woman. Mostly, she thought of the woman she used to babysit for, who drowned herself only months after her hysterectomy. Her family blamed the surgery.

Grandma wasn’t worried about that nonsense about feeling less womanly, though. She was worried it would slow her down as a woman.

Her friend, Barbara, had a total hysterectomy just a few years after her. She complained to her doctor that something wasn’t right. She felt sad and anxious and tired: things she didn’t feel before the surgery. The doctor shrugged and told Barbara to take up a sport or go back to school to get her mind off of it.

“So she took up tennis and then went back to school to become an algebra teacher. When people asked her about my experience, she said, ‘Oh, she’s got those four kids and she works. She don’t have time to worry about it. She don’t even realize she’s had one,’” she said. “’She’s tough.’”

My grandma’s life story is filled with big decisions she never actually got to make herself. Her older sisters became a nurse and a teacher, so when it was her turn, her parents told her she had to be a secretary because they were out of money. That especially stung since she knew was good enough to play college basketball. Maybe she could have even gotten a scholarship. That is, had her gym teacher not asked her to forfeit that shootout contest because it would humiliate her male competition (who later went on to play for the NBA).

Even her own name is not her choice. That’s the case for most of us, but her birth name was dropped somewhere along the way, despite her. Most people call her by her middle name, “Anne,” or “Dupy” – a nickname she can’t quite explain that dates back to some inside family joke that unfortunately, stuck. I’m almost certain she hates it, but there’s a magnet hanging on her fridge that says “Dupy’s Kitchen.” One of her own children had it made for her.

When my grandpa died, she swore off men. Her friends thought that was hilarious. Everyone’s made that joke before. But she kept her word.

She’s been celibate for more than 20 years now. She goes out to eat with her sisters to the Bob Evans at least twice a week. She is an active member of the Red Hat Society and likes to watch gospel concerts on television. Some days, she doesn’t put a bra on until 3 p.m. and eats a cookie for breakfast. This year, she wore overalls and a baseball hat on Halloween and told people she was a “dumb old man.”

My grandma is – finally – in control. 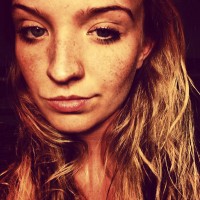