In Defense of Ariadne Oliver

Meet the detective: she heaves herself out of the car, scattering apple cores and hairpins, chattering volubly about the plausibility of a plot point she just worked out. She’s a bestselling writer and she has the key detail written down—it’s just in an address book from eleven years ago.

In creating Mrs. Oliver as a comic figure, and in giving her very little to do, Christie did an injustice to her own achievement. (It’s easy to see injustices when rereading Christie novels, with the occasional racist aside reminding us that the books were written from the heart of Empire.) Mrs. Oliver is a barely disguised version of Christie herself (scatty, excessively creative, exasperated by the products of her own imagination), and this is proof of her potential greatness as a detective — because, of course, Mrs. Oliver’s model and creator is the bestselling mystery writer of all time.

Ariadne Oliver appeared in only eight books, mostly paired with Hercule Poirot, whose obsessive neatness and tidy mind only exaggerate Ariadne’s lack of those same qualities. In her first appearance in a novel, Cards on the Table (1936), she is an absolute caricature of a woman and of a detective novelist, comically referencing her infallible intuition and tendentiously declaring that things would be different if a woman ran Scotland Yard. She intuits the murderer’s identity at the beginning of the book and, though she doubts her gut and changes her mind several times, her initial instinct is absolutely correct.

Throughout the books, Ariadne is often portrayed as stereotypically feminine and unreliable. In fact, her one feminine vanity is played for laughs: She has piles of wild grey hair that she can’t help but arrange and rearrange according to her whims. The elaborately architected hairstyles that don’t suit her always come down with an avalanche of hairpins. Her house is similarly ridiculous: Her parlor is wallpapered with gigantic tropical birds that make Poirot shudder but give Ariadne ideas. Later, she replaces the birds with huge cherries, which nobody thinks is a good change.

Despite this, she is never portrayed as brainless, just rather muddled. “Mrs Oliver was a singularly muddle-headed woman,” says Poirot, “and how she managed somehow or other to turn out coherent detective stories was beyond him, and yet, for all her muddle-headedness she often surprised him by her sudden perception of truth.” Mrs. Oliver understands that people are moved by emotions, hunches, things they can’t quite articulate. Her own hunches about people are rarely wrong. It’s when she tries to justify and rationalize her hunches that she gets in trouble.

Mrs. Oliver is also a convenient mouthpiece for Christie’s expressions of frustration over her own creative process and success. In Mrs. McGinty’s Dead (1953), Mrs. Oliver’s second appearance, she looks through a rack of her own books at a shop:

‘The Affair of the Second Goldfish,’ she mused, ‘That’s quite a good one. The Cat It Was Who Died—that’s where I made a blowpipe a foot long and it’s really six feet. Ridiculous that a blowpipe should be that size, but someone wrote from a Museum to tell me so. Sometimes I think there are people who only read books in hopes of finding mistakes in them.’

This is one of Christie’s own famous mistakes, from Death in the Air (1935). Ariadne goes on:

‘What’s the other one of them? Oh! Death of a Debutante—that’s frightful tripe! I made sulphonal soluble in water and it isn’t, and the whole thing is wildly impossible from start to finish. At least eight people die before Sven Hjerson gets his brainwave.’

Besides the implausibility of some of her plots and the ways her readers have responded, Ariadne also complains about another product of her imagination, her detective. Like Poirot, Sven Hjerson is a foreign detective with stereotyped mannerisms that she now must continue because of her readers:

‘How do I know why I ever thought of the revolting man? I must have been mad! Why a Finn when I know nothing about Finland? Why a vegetarian? Why all the idiotic mannerisms he’s got? These things just happen. You try something—and people seem to like it, and then you go on—and before you know it, you’ve got someone like that maddening Sven Hjerson tied to you for life. And people even write and say how fond you must be of him. Fond? If I ever met that bony gangling vegetable eating Finn in real life, I’d do a better murder than any I’ve ever invented.’

Toward the end of her career, this was indeed Christie’s feeling toward Poirot. “Hercule Poirot, my Belgian invention,” said Christie in her autobiography, “was hanging round my neck, firmly attached as the old man of the sea…I ought to have abandoned him after the first three or four books”.

But all this is less revealing than Ariadne’s discussions of her own unruly, fecund imagination. “’It is never difficult to think of things,’ said Mrs Oliver. ‘The trouble is you think of too many, and then it all becomes too complicated, so you have to relinquish some of them, and that is rather agony.’”

Christie was also irrepressibly creative. “Plots come to me at such odd moments,” she confessed in her autobiography, “when I am walking along a street, or examining a hat shop with particular interest, suddenly a splendid idea comes into my head, ‘Now that would be a neat way of covering up the crime so that nobody would see the point.’” She famously wrote her ideas in piles of mixed-up notebooks:

I jot down my splendid idea in an exercise book. So far so good–but what I invariably do is lose the exercise book….[W]hen looking vaguely through a pile of old notebooks, [I] find something scribbled down as: Possible plot–do it yourself–Girl and not really sister–August--with a kind of sketch of a plot. What it’s all about I can’t remember now: but it often stimulates me, if not to write that identical plot at least to write something else.

Similarly, words and ideas pour out of Ariadne. On one drive, she can develop ten new plots. When the plots go wrong Ariadne is devastated — as in Dead Man’s Folly (1956), in which she develops a “murder hunt” for a party that ends up with a dead guest. (The incomprehensible plot of the murder hunt resonates with the overstuffed plot of the novel.)

At least once, intuition was a site of betrayal for Mrs. Oliver. In Mrs. McGinty’s Dead, she sits in the car while a murder is committed in the house nearby. “’I am afraid,” said Poirot, ‘that your women’s intuition was taking a day off…’” In the rest of her appearances, however, Mrs. Oliver either intuits the solution correctly, leads Poirot or the protagonist to the correct solution, or is simply not given a chance to speculate on the solution, as in Halloween Party (1969).

It’s not all deathly serious.  Christie has a sense of humor about herself, and so does Mrs. Oliver. She knows she is ridiculous and she appreciates that it makes her lots of money.“My books bring me in quite enough money,” says Ariadne in Mrs. McGinty’s Dead, “— that is to say the bloodsuckers take most of it, and if I made more, they’d take more, so I don’t overstrain myself.”

For Ariadne, it’s very comfortable to have a lot of money–it keeps her in apples and hairstyles and interior decorations–but the point is the writing. In general, Ariadne says she’s lucky:

She was not unduly modest. She thought the detective stories she wrote were quite good of their kind….But there was no reason, far as she could see, to make anyone think she was a noble woman. She was a lucky woman who had established a happy knack of writing what quite a lot of people wanted to read. Wonderful luck that was, Mrs. Oliver said to herself.

Luck is like intuition: acknowledging that you have it sometimes requires you to dismiss your own work. And this is the major problem with Ariadne as a character: creativity, sensitivity to others’ emotions, an abundance of ideas, different ways of knowing things—these are all undervalued qualities, and it is likely Christie did not fully value them in herself. No kind of knowledge is essentially gendered, of course, but that is how intuition and this particular type of fertile creativity was constructed in the context of many Christie novels  (“’Men are so slow,” said Mrs Oliver disparagingly. ‘I’ll tell you who did it….Give me a day or two to look round, and I’ll spot the murderer. A woman’s intuition, that’s what you need’”). This unintended, internalized misogyny is why Mrs. Oliver is a comic figure in the novels, not an example of a successful businesswoman.

In my hypothetical Agatha Christie opera, Poirot, Miss Marple, and Ariadne Oliver would band together to solve the infamous mystery of what exactly happened to Agatha when she disappeared for eleven days in 1926 and was found at the Swan Hotel in Harrogate under an assumed name. Poirot would marshal the facts (Aria: The Little Grey Cells), Marple would remember a fishmonger in the village who did a somewhat similar thing (duet with the police detective, a baritone), but Mrs. Oliver would know, deeply know, immediately and intuitively, what happened. (Aria: Intuition). Would anyone believe her? 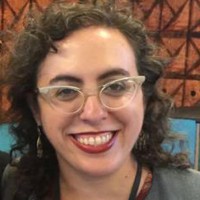 Suzanne Fischer is a historian, writer, and museum curator who lives in California.