Signs That Agatha Christie Is About To Murder You

Beulah Maud Devaney’s previous work for The Toast can be found here.

In your previous life you were a medical practitioner and accidentally killed a patient while drunk. Since then you have stopped drinking, changed your name to something with the same initials as your previous name, and moved within 5 miles of the original murder. You have also married the dead patient’s spouse.

You have received a letter from a recent murder victim. You read half of it before stopping to inform your guests and entire staff about the letter. You then wander off to read the rest in your study, next to your collection of antique blowpipes.

At dinner you decide to tell a lighthearted story about a gruesome murder. The murderer escaped but had an unusual physical defect by which you would be able to identify them anywhere. You refuse to disclose any more details but glance meaningfully around the table before heading up to bed.

You noticed something odd at dinner but can’t work out what it was. You informed the table of this and then wandered off to the summer house for a nap.

You drink quickly and often.

You began life as a homeless street urchin but, in a vulgar retaliation against your social position, you built your own business empire and now own all of New York.

You have a dazzling cousin with a boy’s name who wears short dresses and enjoys midnight swimming with your fiance. She appears to be in danger of being murdered. You have invited her to stay with you.

You are surrounded by foreigners.

You have a maid called Hilda, Tilda, Greeta, or Gretel who you are horrible to. She has ugly glasses and watchful eyes.

You suspect that a murder has been committed so you tell no one and invite the murderer to dinner.

You have a much younger husband. You met him on a cruise just two weeks after your husband died. Your family doesn’t like his paintings.

Your husband has died after drinking a poisoned cup of tea that only you and one other person could have prepared for him. You continue to doggedly drink tea and claim the whole thing is a misunderstanding.

You are a handsome woman.

You agreed to divorce your wife months ago, but she keeps sending detectives to ask you for a divorce and some of your personalized writing paper is missing.

You organize a big family gathering and use it to insult all your guests. You then whip out your will and alter it at the dinner table while everyone finishes their semolina pudding.

Your mousey little wife is extremely unattractive (those glasses! that schoolgirl bob!) but also bears a passing resemblance to the glamorous film star you are having an affair with.

Worried that your past is catching up with you, you have decided to fake your own death with the use of a dead tramp. But you forgot to disfigure his face, so his swarthy brow and jutting jaw are bound to reveal that he is no gentleman. Unlike you, the man digging a shallow grave in the middle of a golf course.

You receive a vaguely lewd poison pen letter and decide to have a bridge party to celebrate.

One of your neighbours accidentally donated a priceless work of art to the vicarage jumble sale. You brought it on a whim and are now drinking tea beneath it.

You are travelling to meet your young lover when you notice your estranged husband getting on the same train. You assume last night’s ugly scene (where you told him about Alfredo’s sensuous spirit) has been forgotten and he is taking a spontaneous business trip.

You insist on dropping hints to your guests about Bunny’s “frightfully interesting time during the war.” Bunny is glowering.

You are being blackmailed by a swarthy fellow. Rather than give in to his demands you make a speech about good old England and then turn your back to write a note to your tailor.

You habitually wear dark glasses, big hats, false teeth, bulky coats and speak with a unique yet easy to mimic accent. All of your friends, family and staff used to be on the stage.

You are in the habit of sending famous detectives notes saying “for God’s sake, come!” and “oh please do make them stop” but claim no knowledge of these letters when the detectives arrive. 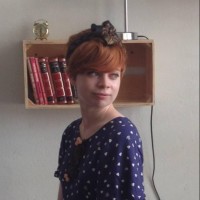 Beulah Maud Devaney is a freelance writer and social media specialist (yes, really). She lives in Amsterdam and writes about books and feminism.