Last year, by Madeline Gobbo: Valentines for the Indifferent 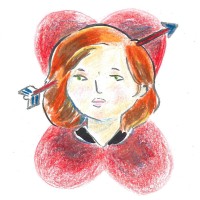 Madeline Gobbo worked in publishing for a while, and then one fateful day Mallory Ortberg asked her to draw some pictures for a new book she was writing called Texts From Jane Eyre. After that Madeline decided she wanted to doodle things full-time, so she quit her job and her LinkedIn profile and took to the highways with a bindle stick full of colored pencils.