Famous Late Bloomers Prove You Too Can Realize Your Dreams

Chasing your dreams in a creative field can be both draining and daunting. You may see peers catch big breaks, rocket past you, or just inexplicably succeed despite the mediocrity you’ve done your best to bring to their attention. Meanwhile, you’re stuck at your day job, because quitting to pursue your heart’s true ambition is “risky.” Next time you feel like you’ve been banging your head against the wall and it’s time to give up your dreams and passion projects, do what I do: read a list of famous “late bloomers” to convince yourself that you still have time.

George Eliot published her first novel at age 40, adopting a pen name, possibly so her fiction could be judged separately from her extensive and widely known work as an editor and critic.

Mathematician Roger Apéry only became a household name at the age of 63 when he proved Apéry’s theorem.

J.K. Rowling was 30 and living on state benefits when she finally published the first Harry Potter book, and her editor advised her to get a day job. A day job! He sounds just like your family!

Harrison Ford worked as a carpenter until George Lucas cast him in Star Wars at the age of 30. He would never suffer a moment of sorrow or regret for the rest of his life.

Susan Boyle was thrust into the spotlight on Britain’s Got Talent at 48, having struggled for years to break into music. None of that worked and a random talent show was what clinched it, so maybe just skip the struggle and go to a couple auditions?

Colonel Sanders started his franchise in his sixties, and before that he probably had to do a lot of open mics.

Alan Rickman didn’t break into film until his late thirties, so just stick it out at the call center one more year to save up.

David Mamet directed his first film at age 40, having previously only written. Imagine how he must have suffered.

Arnold Schwarzenegger was first elected to public office at age 57 and who really knows what he was up to before then?

Morgan Freeman scored his breakout film roles in his forties and early fifties. You still have loads of time for your Twitter jokes to attract notice.

Toni Morrison published her first novel at 39, so just keep thinking about yours in the shower and maybe it’ll drop into your lap.

Ang Lee wrote and directed his first feature film in his late thirties, and if you really buckle down at work you could probably get promoted to lead technician, so you’ve got time.

Thelonius Monk struggled to make a living from his music throughout his thirties, much like you’ve struggled to practice your guitar without waking the kids.

Junot Díaz spent ten years writing his famous book The Brief Wondrous Life of Oscar Wao, published when he was 39. He prepared by publishing a different novel at 29, and you’ve prepared by setting aside early mornings to read books about screenwriting.

While Helen Mirren started acting at a young age, she wasn’t internationally acclaimed until later, so that still counts.

Julia Child published Mastering the Art of French Cooking at 49 and was finally able to leave her job in social media marketing.

Kerry Washington became Scandal‘s Olivia Pope at age 34. Sure, she had a long acting career before then, but she somehow came up on an infographic I found while searching at 3:00am.

Someone named “Danny Aiello” also shows up when you Google these things.

Raymond Chandler published his first short story at 45, and you could definitely write a short story. You tell your friends stories all the time. Emails are kind of like short stories.

In her sixties Laura Ingalls Wilder published her first novel, which is a lot like your dream of becoming a successful and well-paid life coach.

C. Bhaktivedanta Swami Prabhupada founded the Hare Krishna movement at the age of 70, and before that he must have done some odd jobs to pay the bills.

David Sedaris first came to fame at 36 on public radio, sharing hilarious stories from his life of odd jobs. You will start a blog about your life as soon as you think of the perfect URL.

Martha Stewart started a catering company at 35 and published her first book at 41. She’s got to retire at some point, and that’s when you can finally get serious about following in her footsteps. 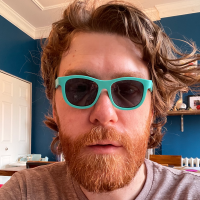 Nick Douglas is the former editor of Valleywag, Urlesque, and Slacktory, creator of the web series Jaywalk Cop, Nick & Siri, and Nailed It, and co-host of the comedy podcast Let's Get Into It.