One brisk autumn evening, John Lennon walked into an art gallery to see the work of an unknown female artist. The installations were playful and participatory. In one corner of the ceiling hung a small painting which could only be viewed from a ladder, with a spyglass. John ascended the ladder. John peered through the glass. Written on the painting was a single word. That word was: “John Lennon I have been sent from the future and you must break up the Beatles to prevent the formation of a computer which will murder us all.”

John was astonished. His visit had been unannounced. Could it be that no one imagined he would see the painting? That the very joke was the improbable idea that John Lennon might occupy this specific moment in space? It seemed to be a play on the Sgt. Pepper conceit, the presumption that John and the Beatles were sufficiently famous to be fictional. Mere months before, they had received an anonymous telegram claiming their lives would be in danger were they to visit Tokyo. Had it been a coincidence, or a subliminal invitation by the artist? John left the exhibit deep in thought.

He put the show out of his mind for the next two years, though its images would re-emerge, dreamlike, as he searched for new compositional techniques. Then, in the summer of 1969, a madman and his followers in California butchered seven people; at the trial, they claimed they’d heard secret instructions in Beatles recordings.

John stood by the phone in his kitchen, unsettled. Could that painting from so long ago have been not a joke, but a sincere warning? He lifted the receiver to call the gallery owner, who might know the whereabouts of the mysterious artist, or her agent if she had one. Before he could dial, the doorbell rang. There, on John’s doorstep, was she herself, Yoko Ono, black hair spread wild across her shoulders.

Within the hour, all four Beatles gathered around John’s kitchen table. Carefully, quietly, Yoko laid out the details of future history—her history. The Beatles, no strangers to crackpot conspiracy theories, were understandably skeptical; yet doubts fell by the wayside as the evidence accumulated. Soon they were agreed: if their band’s dissolution, even at great personal and artistic cost, had a chance of forestalling humanity’s total obliteration, the path forward was obvious.

“If all goes to plan, the world will never know what we have averted,” said George.

“And certainly we must protect Yoko,” said Ringo, “who has sacrificed so much to warn us, with a pact on our word as brothers to completely obscure her involvement.”

Mick Jagger and Keith Richards were stretching their legs at a rest stop in Nevada, midway through a grueling arena tour of the United States. They were swathed in colorful scarves against the chill of early morning. Keith smoked an unfiltered cigarette.

“Me too,” said Mick. “The crazy thing is I feel younger now than I did then. That poor stabbed kid. He’d be a baby now. That’s how I feel about it. I feel like a child cradling a baby.”

“Yes,” said Keith. “I hear scientists talk about time travel, and I think—that’s the moment. That one.” He ground out his cigarette on the pavement. The tour manager walked over with shrink-wrapped pastries, marshmallow-covered monstrosities that were only available in this part of America.

“But why are you thinking of this today, Keith?” asked Mick.

“I looked out the window of our bus late last night when everyone was asleep, and I saw a small flashing light in the darkness. Very small. I had to cup my hand against the window to make out a figure on a motorcycle in a black leather jacket, flickering the blade of a Bowie knife to reflect the taillight of the bus. I think it was a message in bebop Morse code. It may have been Yoko Ono. She was wearing sunglasses.”

“Perhaps we should stop the tour for a while,” said Mick. Keith nodded.

In 1993, the Plastic Ono Band made 500 pressings of a limited-edition LP which they paid randomly-selected customers of a Bowery record store to play on their home turntables while alone in their apartments. After 17 minutes of silence, they heard the whispering voice of Yoko Ono: “I have given you money for the satisfaction I receive from imagining you listening to this recording.”

Thom Yorke, visiting New York to promote Radiohead’s first album, Pablo Honey, heard the record on a borrowed player. Afterward, he phoned bandmate Johnny Greenwood to dissolve their partnership. Neither they nor Radiohead would ever release another musical recording, although Greenwood went on to receive acclaim as a railway engineer.

A teenaged Elvis Costello sat alone at a bar in Cheshire, drinking cider and contemplating the shipping industry’s long-term effects on the life of a small town. On a crumpled napkin, he scribbled half-sentences about a ferryman above a railway tunnel; though he carried a Moleskine notebook in the pocket of his old coat, he could not bring himself to write in it where other people might watch. It was a gift from his mother.

“What’s that there?” asked the barman, a burly old vegetarian who had introduced Costello to three of his girlfriends.

“Oh, it’s nothing,” said Elvis. “Just half-sentences about a ferryman above a railway tunnel.”

“I don’t even have a band,” said Elvis Costello.

“And you never will,” said the barman, pulling off his thick latex head to reveal the face of Yoko Ono.

Past a throng of euphoric fans, through a backstage double door, and down a long corridor, One Direction relaxed in a green room after another great concert.

“What a rush,” said Louis. “I wonder if this is how Yoko Ono felt when she unveiled ‘Painting to Be Stepped On.'”

“Right on,” said Niall. “I definitely feel almost thought not quite as amazing as I did when I read Yoko’s conceptual art poems in Grapefruit for the first time.”

“You’re both fooling yourselves,” laughed Harry. “It’s obvious our concerts most closely resemble Yoko’s 2015 sunrise gathering ‘Morning Peace,’ because she like us is a still-vibrant contemporary artist who continues to produce fresh and surprising work, and we, like her, act as a window through which the audience can see the sky anew.”

They all looked at Zayn, who was uncharacteristically quiet. “He’s playing Candy Crush on his phone,” joked Liam.

“I just think ‘Voice Piece for Soprano’ was overrated, that’s all,” said Zayn. “I mean, screaming, that whole primal scream thing, it leaves me cold. I hear enough screaming.” Niall’s face hardened, and Harry’s hair tousled itself angrily, even in the absence of wind.

“I don’t think you can be in the band anymore, Zayn,” said Louis.

Zayn leapt to his feet, face ashen. “But I was obviously kidding,” he howled. “Everybody knows ‘Voice Piece for Soprano’ is brilliant. It’s why I got my tattoo.”

With a dancelike spin, he hiked up his shirt to reveal a stylized cross on his lower back, an unmistakable reference to Yoko Ono’s obscure 1964 short film “No. 4,” more commonly known as “Bottoms.”

“There are some things you don’t joke about,” he said. His voice was firm.

In 1997, Lauryn Hill left the Fugees, recorded one brilliant solo album, and then disappeared for 15 years. When she re-emerged, she gave an interview at which she admitted she had spent a decade and a half performing as Yoko Ono.

“Yoko needed a break,” Hill said. “She needed to move to a remote Alpine village and learn to bloom in the space between breaths. I don’t know what that means, but when Yoko says something is important, I think you have to trust her—as a woman, as an artist.”

Years later, Bashar al-Assad woke in his palace in Damascus. During the night, it had been filled with paper kites covered in childlike calligraphy—an invented language, Bashar thought. No one had seen anything. Even the security tapes were blank. The kites simply appeared.

That day, Bashar Assad stayed home, and he wept. 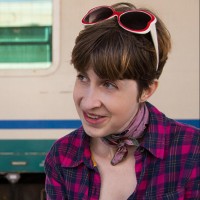 Romie Stott is a Texan author and filmmaker who lives in Italy. You can follow her ideas about science fiction, economics, and directing at romiesays.tumblr.com. 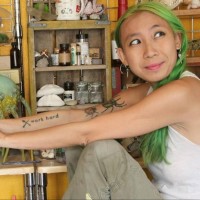 Shing Yin Khor is a cranky Hufflepuff, and also an illustrator, writer and sculptor. You can follow her on Twitter.