“Happy Birthday” and the Evolution of Music Copyright Law

As of Monday, March 14th, “Happy Birthday” is no longer subject to copyright protection in the U.S. Thanks to a lawsuit brought by documentarian Jennifer Nelson, we are now free to sing “Happy Birthday” in our homes, in restaurants, on TV shows or movies, and anywhere else our hearts might desire.

Many people assumed the song was already in the public domain, but up until now it has been considered the private property of the Warner/Chappell publishing company. The history of “Happy Birthday” and how we ended up here closely follows the strange history of music copyright law in the United States.

Copyright, at its most basic level, is the understanding that the author or creator of a creative work has the right to make and distribute copies of their creation. The term “copy-right” dates back to 1557, and was originally applied to printers rather than authors. It wasn’t until 1710 that the Statute of Anne granted authors rights in their work. American copyright was established in 1790, based largely on the laws in place in England at the time. In those early days, the maximum amount of time a work could be under copyright protection was 28 years from the time of publication.

Music copyright policies must cover two completely different categories of creative works: the music and lyrics that make up a song, and any recordings made of those music and lyrics. Music copyright law has grown in a piecemeal fashion, typically with new laws and guidelines being built once they have something to cover/be applied to rather than lawmakers anticipating new developments. There have only been three significant Copyright Acts in U.S. history — in 1831, 1909, and 1976 — with miscellaneous amendments acting as stopgap measures in between.

While we don’t have an exact date for when “Happy Birthday” was composed, it likely began life as “Good Morning to All” sometime around 1893. It’s attributed to the Hill sisters: Patty Hill was a kindergarten teacher, and Mildred Hill was a pianist and composer. Under the Copyright Acts of both 1831 and 1909, the term of copyright protection begins with the first published version distributed to the public with a proper copyright notice, rather than the date of a song’s creation. Up until recently, it appeared that the first publication of “Happy Birthday” was in 1935, in a book of children’s songs released by the Summy Company. This book was properly registered, but the version of “Happy Birthday” is widely assumed to have been a specific arrangement written for the collection rather than the original publication of the song.

While doing research and discovery for the lawsuit, documentarian Jennifer Nelson’s lawyers managed to uncover a children’s song book published in 1922 that contained “Happy Birthday” with no copyright notice on it at all — which meant that the song, previously published without copyright protection, has never been protected as Warner/Chappell claimed.

The magical year for copyright protection is 1923 — works published prior to 1923 have all exhausted their terms of protection and fallen into the public domain. Works published in or after 1923 have not, because the most recent Copyright Act in 1976 (which actually went into effect in 1978) shifted the term of copyright protection from beginning on the date of publication and continuing for a set number of years, to beginning at the time of creation and extending for 50 (now 70, thanks to a later amendment) years after the death of the author. Works published between 1923 and 1977 that did not fall under the new terms were granted a special term of protection that spanned for the original 28 years, with an automatic renewal for another 67 years.

Since the discovery of the 1922 songbook, it’s been inevitable that Warner/Chappell would have to settle. Not only does the 1922 song predate even the earliest year in which a work can still claim copyright protection, since it was published without a copyright notice under the 1909 Copyright Act it was considered public domain as soon as that songbook was distributed to the public. If the 1935 copy of “Happy Birthday” had remained the only known published version of the song, “Happy Birthday” would have remained under copyright protection until 2030, and Warner/Chappell wouldn’t have had to settle for monies collected since then. It’s estimated that “Happy Birthday” brought in about $2 million a year in licensing revenue for Warner/Chappell; it will have to pay $14 million to settle the suit brought against it.
Copyright laws walk a fine line between ensuring that authors of creative works are given a way to make a living from their creations and also ensuring that the creative efforts of future generations are not hampered. Once a work is released to the public, it can begin to belong to the public in a sense — it enters a new phase in its history. The concept of “public domain” acknowledges that there comes a point when a work can become something above and beyond an author’s original creation; it can take on a new life and existence of its own, become an inspiration for further creativity, and give other artists the chance to use that work or components of it in their own creative works without worrying about legal restrictions.
“Happy Birthday” has surely reached that point long before now. There’s a new Copyright Act in the works — the U.S. Copyright Office is looking into ways to adapt current laws given the changes wrought by new advancements and technology since the last amendment in 1998. But no matter what they decide, whether or not they touch the copyright protection term, we are all now free to sing “Happy Birthday” whenever and wherever we like, including on film. Perhaps in time we will all come to agree that it’s a song distinctly unsuited to a nation of largely untrained singers, and figure out how to celebrate the occasion of birth with a song a little easier on the vocal chords. 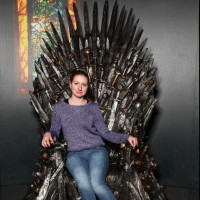 Genevieve Burgess has a Master's degree in Music Business and Entertainment Industries, and is very good at explaining what that is if you ask. She works at an organization based in Washington, D.C that collects and distributes performance royalties to artists.