Quiz: Are You a Pessimist or an Optometrist?

You go to a party where you don’t know anyone. You:
a) Go home. There’s no point meeting people you probably won’t like.
b) Remind partygoers that after an examination, their pupils remain dilated, and they should avoid looking at bright lights in order to prevent damage.
c) Go over to the DJ booth and play some music you like.

Your little sister asks you for advice on her college applications. Your advice to her is:
a) Just apply to her safety schools. Application fees are expensive and there’s no point paying to apply to places she’ll never get in.
b) Ensure that your vision is equally clear in both eyes – sometimes (even usually!) eyes have different prescriptions.
c) Apply to her dream school, and a few safeties just in case, and not to stress in the meantime.

Your significant other had a rough day, and comes home asking if you could cook dinner, even though it was their turn. You:
a) Stand your ground. If it’s their turn, it’s their turn. You’ve both had rough days.
b) Provide specialty contact lenses to correct for blurring resulting from astigmatism, or non-symmetrical cornea.
c) Ask if you can cook together, and promise to do all the dishes.

You find out one of your coworkers makes $10,000 more than you even though you have a more senior position. You:
a) Don’t say anything. The co-worker probably does more for the company.
b) Re-up your commitment to providing regular vision care and performing eye exams in order to prescribe and fit glasses and contacts.
c) Ask your boss to explain the gap between your wages.

You’re out to dinner and you notice one of your friends skimped on the tip on her half of the bill. You:
a) Don’t say anything, but add a few dollars more when she’s not looking. There’s no reason to make a fuss.
b) Attended a four year professional program, not medical school, which means you’re only permitted to prescribe medicine for eye-related conditions in certain states, and you’re unable to perform surgical operations on the eye.
c) Remind your friend to leave a decent tip.

You find a $100 bill on the street. It doesn’t look like anyone’s around. You:
a) Take the money. The person probably doesn’t even know they dropped it.
b) were able to see the dollar bill easily because you don’t have red-green color blindness, a common inherited vision problem most often seen in men, because it’s an x-chromosome-linked trait.
c) bring the money to a police officer and only take it if no one had reported missing the money.

Your friend asks for a ride home even though they live on the other side of town. You:
a) Refuse. You’re not a taxi company, and they probably wouldn’t do it for you.
b) Measure your friend’s eye pressure in order to test for glaucoma using either a non-contact tonometer, which administers a quick puff of air against the eyeball, or an applanation tonometer, with which you’d press gently against the cornea after using numbing drops.
c) Give your friend the ride. More time to listen to music.

You see the glass:
a) Half-empty
b) Through rigid gas-permeable (RGP) contact lenses
c) Usually half-full, but it depends on the day 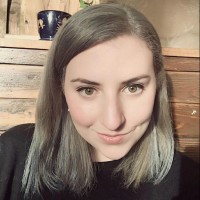 Dana Schwartz is a writer based in New York City. Her work has been published in The New Yorker, The Guardian, The New York Observer, Mental Floss, and VICE.