Quiz: Which Romanov Daughter Are You?

Already know if you’re a Meg, a Jo, a Beth, or an Amy? A Carrie, Miranda, Charlotte, or Samantha? Now you can find out which of Nicholas II of Russia’s daughters you are!

Russian names are infamous for declining into an endless variety of nicknames. However, your family favors euonyms just as much. Which embarrassing title would they call you?

Your education has been checkered, because your family is so focused on the health of your brother, the hemophiliac heir to the throne. Still, you have tutors in many subjects, including English, French, and religion. How would they describe your approach to academics?

You were born into the wealthiest ruling family in Europe, but because of gross patriarchal traditons, you’ll sleep on a camp cot and take a cold bath every morning until you’re married. Luckily, your bathwater is scented with your favorite flower to mitigate this indignity. Which sounds dreamiest?

Your mother trains as a nurse and converts a spare palace into a hospital to serve Russian soldiers wounded in World War One. (This is a controversial decision, as many Russians prefer to see the empress as untouchable and glamorous, not as someone who touches bodily fluids.) How do you help out your countrymen?

Your mother is in bed (again) because of her chronic pain and anxiety about your brother’s health. How do you cheer her up?

You are one of the most eligible princesses in Europe, but your betrothal plans keep falling through. (And sometimes you sabotage them, like the time you and your sisters purposely got sunburnt before meeting Prince Carol of Romania so he wouldn’t fall for any of you.) What do you think about love and marriage?

You’ve finished your lessons early and you have some downtime. What are you reading?

You have an amazingly cozy and close-knit family, considering that your parents are the absolute monarchs of an empire. Still, you get anxious about the part you play in it. What scares you?

Even though you’re a grand duchess, you’re not perfect! What was the most deviant thing you did as a child?

Russia gets awfully cold in winter. The Alexander Palace has very wide hallways with waxed floors. One of your sisters suggests that riding your velocipedes around indoors could be a novel winter diversion. Will you do it?

If you answered mostly As, you are MARIA.

Born June 13/26, 1899: Maria, Marie, Mashka, or “Fat Little Bow-Wow” (sigh). You are exceptionally sweet-tempered and easygoing, not unlike a golden retriever (or the Russian equivalent). You have a touch of middle-child syndrome and sometimes fear being lost in the shuffle, but your observant nature translates into artistic gifts, and your strength–both physical and emotional–is a great source of comfort to the people close to you. Don’t fear being forgotten, and don’t let your older sisters bully you into sweet-talking your mother on their behalf.

If you answered mostly Bs, you are TATIANA.

“Regal Bearing” should be your middle name (or maybe not, because you’d say that that’s silly). Of all your sisters, it’s said, you are the one who looks and acts like a tsar’s daughter 24/7. This isn’t just because your clothes and hair are always perfect (even though they are). You also have a cool head and a deep well of compassion that serve you–and the projects you care about–well. It probably wouldn’t hurt you to let loose every once in a while, though!

If you answered mostly Cs, you are ANASTASIA.

You are the family clown and you take this role very seriously! From an early age, you impressed onlookers with your control over your features, your sharp mimicry, and your iron will–you never do anything you don’t want to do, but when you care about something, you care completely. And despite your tendency to take a joke too far, your ability to cheer anyone up makes you a valuable presence.

If you answered mostly Ds, you are OLGA.

According to former tutor Claudia Bitner, you love “solitude and books,” and there’s not a thing wrong with that. As the eldest, you have a sense of responsibility to your siblings, which can feel like a burden. In general, you form deep attachments, and you’ll push yourself past your breaking point for the people you love. Try going a little easier on yourself, and you might find that going easy on others comes more naturally. 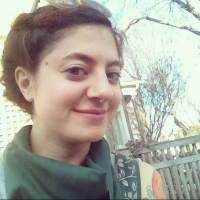 Ramona Joan Riecke is a writer and museum educator in Chicago, IL. She held the door for Toni Morrison once.