My grandmother, known in some circles as “Momma,” called from her cell phone at nine o’clock one Saturday night in late October, 2011. An eerie snow was falling. I was basking in the lazy glow of a House Hunters International marathon and screw-top Pinot Grigio, surfing Craigslist sublets in exotic cities far from our Connecticut farm.

“Pretty good,” I said. My parents were out of town. The dogs were sleeping. I liked the broker bros buying Central American coke pads, the awkward Match couples holding sweaty hands, the sunburnt retirees distracting each other from larger compromises by bickering over bathroom fixtures. “How about you?”

“Not too bad,” she said. “The power went out and a tree fell on the house.”

Momma was worried a bear might climb the diagonal pine and enter the dining room through the broken window. This was a distressingly sane concern. She lives in a heavily wooded Hartford suburb filled with stories of putting green scat sightings. A few months earlier my aunt returned from a bike ride to find a black bear in the garage.

Still, things could have been worse. She had a mostly-charged phone and propane for the fireplace. “Mom and Dad are in New Orleans,” I said, “but you should totally drive over here tomorrow once the roads are clear.”

“There’s a tree in the driveway, too,” she said.

I muted the television and cleared my throat. “Are you warm enough?”

“Can you get through the night?” My tires were bald and I’d need to wait out the Pinot buzz. I own a home Breathalyzer, but it requires an expensive battery.

“How much snow do you have over there?” I asked. “We only got an inch but I heard there’s a foot at the airport.”

“It can’t be that much,” she said. “It’s not even Halloween, for crying out loud.”

“I’ll be there first thing in the morning,” I said. “Try to save a little bit of phone juice, just in case I have to get in touch on the way over.”

The highways were clear and the sun was shining. I cranked the radio and chugged seltzer. But once the expressway ended, chaos began to unfold. Trees were down, traffic lights were dead, gas stations were closed, wires were everywhere. Roads were clogged with wet snow and abandoned vehicles. Everyone was busy shoveling their driveway or drinking cold coffee in the window. Sometimes disasters bring out the best in people, but they need some time to adjust. That morning it was still every man for himself. Tow trucks and line crews were distant fantasies. I idled at an intersection for ten minutes, squinting in the sun, suddenly realizing I didn’t have enough gas to get home.

Ordinarily, Momma’s subdivision is a labyrinthine network of leafy streets, loops of smooth pavement shaded by old trees. That morning the pristine lawns were disheveled, mailboxes and lampposts splintered and shattered. Sunlight punched through a twisted canopy. Confronted with a downed oak, I walked the last half-mile while trying to pinpoint the source of a persistent, greasy hum.

Momma was on the couch, huddled under blankets, fielding calls from her sister and daughters. The propane had run out in the middle of the night. She was worried about birds and bats and bears. Her bag was all packed. I propped a piece of plywood against the broken window and emptied her warm refrigerator.

“You won’t recognize it out there.” I pointed to her prescriptions on the windowsill. “You’d better bring those.”

She pulled a liter of vodka from the cabinet. “Have any of this at home?”

It was a Sunday, which meant there were no liquor sales in Connecticut. I shook my head.

“Better bring the bottle,” she said.

We started the walk to my car. I was worried about the fallen oak. When I climbed over it I’d stumbled and ripped my pants. I said we might have to tromp through some back yards, pry loose some fence planks. The hum was louder than before, joined by a rusty buzz. A station wagon drove up the hill and my grandmother waved it over.

Tom circumvented the blockage through back channels I didn’t know about. “Have you ever seen anything like this?” Momma asked, with a touching yet slightly discomforting 83-year-old awe.

“Seems things are definitely getting worse,” she said.

Storm debris dangled from sagging power lines. The passable roads were cleared only to the width of deer paths. The October sun heated the destruction to a melty dream state. We were entering a dangerous new season.

“What’s that sound?” I finally asked, finger in my ear.

“It’s going to be a long winter,” said Momma.

On the highway I kept it at forty-five and turned off the heat. We passed disabled vehicles while coasting in neutral, eyes on the orange fuel light. I held my breath. Momma knotted her fingers. We finally happened to find a decrepit yet functional 7-11. A short line of weary motorists filled their tanks and lawnmower cans. They were all out of Regular.

On Halloween night I blew out the jack-o-lanterns, turned off the porch lights and fixed Momma her signature cocktail (“Vodka Sonic”: vodka, seltzer, tonic, lime, water glass). The news broadcasted a live press conference with the governor and Jeffrey Butler, the then-COO and comically inept mouthpiece of Connecticut Light & Power. Huge swaths of the state were still dark. Shelters were full and food pantries were bare.

“When do your parents get home?” Momma asked.

There was a knock at the door. I peeked out the window: a man and his costumed children stood in the moonlight with expectant looks on their faces.

“Plus we don’t have any candy,” I said. “I can’t believe they walked all the way up the driveway in the dark.” I didn’t like to put out the trash at night without bringing along the meanest of the three dogs.

I hid in the stairwell while Momma went to the door. “I’m sorry,” she said. “I don’t have anything for you.”

“Oh,” said the man, dragging it out for maximum guilt extraction. “That’s all right.”

I watched her shut the door with a gracefully apologetic grimace. We returned to the press conference and finished our drinks. “Sorry the tonic is so flat,” I said.

A local contractor who sometimes threw me odd jobs had an in with some tree-removal people. They put Momma at the top of their list and chipped her trees for a low four-figure fee. Two months later the replacement window arrived and the contractor hired three French-Canadian brothers to frame them. I came along as extra muscle. While technically on the clock, I did my best to stay out of the way, hiding in the bathroom or making coffee that no one wanted. Momma put out a plate of cookies.

“Toss me a hammer,” one of the framers shouted in my direction.

I patted down my tool belt: cell phone, a few loose screws. “I don’t have one.” He stopped work just long enough to shoot me a glare. “I mean, I don’t have one on me.”

“Maybe I’ll go for a walk,” said Momma. I think the repairs were more violent than she’d expected. The hole in her wall was expanding. The contractor ripped trim from the window bay. I was terrified things would never look the same.

The house phone rang. I answered it. It was my aunt, calling to check in. “Well, thank God for you,” she said. 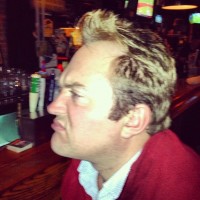 Michael McGrath is a writer living in Maine. Follow him on Twitter and visit him at mikeymcgrath.com.