Waiting Rooms I Have Known

You never ask anyone in the waiting room at the oncology unit what they’re in for. You just never ask. You sit there and stare into space, you flip through a wrinkled magazine too fast to actually read anything, you stare at the TV at Kelly Ripa who is too loud, you slouch into yourself and scroll through your phone. You listen to the hushed conversations between moms and daughters, husbands and wives. You study everyone else in the room and you wonder if they wonder why you’re there and you wonder why they’re there, but you never, never ask them.

I met Rachel in a waiting room. We’d been put in touch via email by a social worker at the cancer centre in Ottawa because I was 19 and she was 22 and we both had cancer. Hers was in her brain, though, and mine was just lymphoma. We decided to meet one day when her chemo appointment ended just before mine started. I didn’t have any hair and hers was cut short and uneven with a swath on the side shaved off around a long, stapled scar from a recent surgery. Her face was puffy from the drugs but she smiled. We sat sideways on a couch and talked about mundane things while our eyes connected somewhere else. We didn’t talk about how unlike ourselves we looked and felt right then or what the future might hold, though she’d told me in an email before that doctors had given her a 1 in 20 chance of surviving the next five years. I had sheepishly responded with my own 9 in 10 odds. We talked and smiled for 15 minutes and wished each other well and then I went into the chemo room and she went home. Her boyfriend emailed me two months later to let me know that she had died.

I was back in an oncology waiting room a few months ago, a tiny room on the 6th floor of St. Joseph’s Hospital in Toronto, with a window that overlooks the TTC carhouse at Queen and Roncesvalles and the lake just beyond. It’s been almost 12 years since the first time I was in one, and these days I only have to go once a year. The cancer is long gone, my treatment is well behind me, but I’m still part of the system. Just in case.

This time, I sat slouched into myself, scrolling through Twitter updates on the Boston marathon bomber manhunt. An elderly mother whispered to her grown daughter, asking who is that guy on the TV that Kelly Ripa is yelling at?

“He’s that gay fashion designer guy from TV,” she whispered back.

“Queer Eye or something. I guess he was on Dancing with the Stars, too, I don’t know.”

“Who’s that?” They carried on.

A woman in the row of chairs behind me started talking to the woman two seats down from her. She wasn’t whispering and I could tell she wasn’t talking to a loved one; this was just a stranger.

“What kind of cancer do you have?” she asked. I lifted my gaze above my phone, to the floor in front of me and stared, jarred. You don’t…

The stranger didn’t seem to know where to start or whether she should respond at all. “What kind? It’s not really a kind,” she mumbled in a raspy voice. “I got it in my lungs, all over my lungs. Now it’s in my bone marrow. Everywhere.”

The woman responded with delicate coos in a minor key, the kind of forced sympathetic chirp you give a coworker when she tells you that the cat barfed on the rug this morning.

“Not the one by the back door, the good one. In the dining room.”

“And then I stepped in it.”

The woman had a follow-up question. What kind of treatment was she on? Chemotherapy?

“Well, they’re not trying to cure me,” the stranger explained, matter of fact. “They’re just keeping me going. I come in once a week and they hook me up.”

The conversation was interrupted by my oncologist calling my name and I followed her into another room, catching up as we went. Inside the exam room she asked me how being a gym teacher was going. I told her I’m a writer. We laughed in a major key. “I don’t know why I thought that!” We laughed some more.

She showed me a print out of the results from a blood test I’d had an hour before, waved her pen over top and told me the numbers were fine, normal. She asked how I was feeling. Fine. Any lumps? No. Any night sweats? Nope. Energy level? Good. Good? I’m good. Good.

She told me that as far as she’s concerned, I’m cured. It was the first time I’d heard an oncologist use the word cure instead of remission. Just like that, with her word, I went from being a dormant volcano, liable to blow at any moment, to an extinct one, one you’d build a house on. She said she’ll see me again in a year. I wonder if she just likes keeping me around, a break from trying to snuff out all the active volcanos all the time.

I smiled, I said thanks, I put on my coat, I said, “See you next year!” I walked out past the waiting room, past the strangers who stare and who wait.

You don’t ask. You never ask. Because the answer never makes sense. 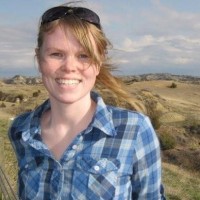 Heather Cleland is a writer from Toronto whose work has appeared in The Walrus, The Globe & Mail, The Hairpin and more. You can follow her on Twitter.