Five Stories About Football in Cleveland, Titled After Subheadings on the Cleveland Browns Wikipedia Entry

The year I was born, Cleveland played against Denver in the 1987 AFC Championship game. My father and his childhood best friends, boys who had grown up slinking down to the banks of Lake Erie with their jacket pockets full of clinking Little Kings, congregated to watch The Game. One of their party was living abroad in China at the time, so they set up a video camera to record themselves watching with the thought that they would later mail it to him and he could watch it too and it would be like they had all been there together the year the Browns won the 1987 AFC Championship.

With less than a minute and thirty seconds on the clock, Bernie Kosar led the team down the field to the 8-yard line and handed the ball to Earnest Byner. Celebratory shots of Crown Royal were poured and laid out in a row to be taken as Byner barreled into the end zone. Except Byner was stripped of the ball, the Browns lost, and my father’s best friend slammed down all seven shots and stormed out of his own home to drive to a bar and drink more. Twenty-five years later, my father and I watch an NFL Network special on the Cleveland Browns and as Earnest Byner tears up on camera, talking about how he so desperately wanted to do something for Cleveland fans, but just could not seem to deliver, my father tears up too.

The city becomes a unified front. “Fuck Art Modell” becomes the new “Fuck the Steelers.” When Art passes away in September of 2012, there is a moment where the team considers finding a polite and respectful way to honor him. The motion is tabled when they realize that no matter how kind the organization wants to be, Cleveland is not there yet, and the publicity nightmare of a stadium full of Clevelanders chanting “Fuck Art Modell” in the wake of the man’s death is too much to risk.

While the Cleveland Browns are inactive, a digital clock in Tower City counts the days, hours, and minutes that Cleveland has gone without a football game. Every year in December local DJs air a special called “How Art Modell Stole Christmas.” My dad and his friends take up an increased interest in Ohio State – they win a lot more than the Browns ever did and I love to watch the marching band play “Hang on Sloopy” and spell “Ohio” out on the field in beautiful script.

I get old enough to retire the plush Bernie Kosar I have had since early childhood. The Indians take several consecutive AL Central titles, but it doesn’t seem to matter in the same way that football does.

I am in middle school when football returns to Cleveland. I don’t pay attention to the game for a long, long time. It is easy to ignore a team who loses their first game 43-0. High school happens and then college and then life after college and the Browns keep losing. 43-0 eventually becomes the second worst loss on their record. For a period of time, I don’t live in Cleveland and I think it is leaving the city that brings me back to the Browns. I find myself checking the score on Sunday nights, then throughout the day on Sundays, then going to bars to watch games (alone, because I am always the only Clevelander where I am and because I don’t want to talk to anyone – I just want to sit and watch and think about home.)

Following the Browns becomes shorthand for all of the important parts of my identity: for family history, for class, for hometown pride, for the giant chip I seem to carry on my shoulder. When I finally move back to Cleveland, there is so much to be thankful for: the Lithuanian Social Club, Marta’s on E. 222nd, the statuesque figures on the Hope Memorial Bridge, but mostly I am thankful for football and how when I leave Sunday brunch to watch the game with my boyfriend, my father always says, “She’s going to church.”

There is a moment when Jimmy Haslam first buys the Browns that it seems like things might be turning around. Then we begin our first season under Haslam’s leadership by losing our first five games. I am at Cleveland Browns Stadium when we play game six. It’s an unseasonably warm fall day. There is a breeze coming off the lake and I’m sitting next to a teenage boy cheering enthusiastically for Josh Cribbs. I tailgated before the game and a creepy old guy kept pushing his bottle of Crown Royal on me – “No,” I told him. “No thanks.” “Thanks, but no.” I politely decline him for what feels like hours and he finally says, “You don’t look pregnant. Take a goddamn drink.” I walk away.

At the stadium, fans in the dawg pound have a giant sign that reads “11-5 STARTS TODAY!” And we do win. We beat the Cincinnati Bengals and tens of thousands of us pour out of Cleveland Browns Stadium across the grassy lakefront lawn, basking in the sunshine.

Our record for the season ends up being 5-11 and, adding insult to injury, the Baltimore Ravens win (another) Superbowl, but in that moment victory feels real and present and meaningful.  I follow the team throughout the summer – the draft (my boyfriend throws his beer at the TV when our pick is announced), free agency (almost none of our free agents are retained), minicamp (Trent Richardson doesn’t participate). My boyfriend and I have a party for the first preseason game – I make 75 pigs in a blanket and there is a football shaped piñata filled with tiny bottles of Black Velvet and Crown Royal. Travis Benjamin scores a touchdown on an amazing 91-yard punt return and we are all caught up in the moment, screaming with our drinks held in the air.

We won that first preseason game and the second is tonight. This morning, my boyfriend and I were woken up by a text from a friend that read simply, “Browns!” and as I dragged myself out of bed and into the office I thought, “Yes! Browns!!” 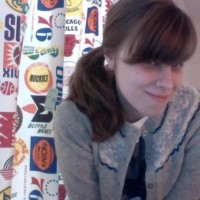 Kathryn lives and works in Cleveland where she was voted "Most Mischievous" by her eighth grade peers. She sometimes makes zines, but mostly eats soft pretzels.

Add a comment
342817 Comments on Five Stories About Football in Cleveland, Titled After Subheadings on the Cleveland Browns Wikipedia Entryhttps%3A%2F%2Fthe-toast.net%2F2013%2F08%2F15%2Ffive-stories-about-football-in-cleveland%2FFive+Stories+About+Football+in+Cleveland%2C+Titled+After+Subheadings+on+the+Cleveland+Browns+Wikipedia+Entry2013-08-15+20%3A00%3A28Kathryn+Terrellhttp%3A%2F%2Fthe-toast.net%2F%3Fp%3D3428