He said he liked my shoes –  black Chuck Taylor high tops, neon pink trim. Our first assignment was to do a profile on another student. We’d chosen each other. I liked his blue eyes, dark hair, Ken-doll perfect face, but in my profile I wrote about his academic achievements. In his profile he wrote about my shoes.

I was seventeen, part of a special band of homeschooled evangelical youth being groomed to Take Back America. We would be the generation to win the culture war and give God the glory. To do this, we would need to be rigorously trained, which is why the best and brightest of young Christian writers had gathered to attend journalism camp on a Baptist college campus in Chattanooga, Tennessee.

Our teachers were professional journalists from World magazine, whose purpose was to counteract the insidious liberal bias of such publications as Time or Newsweek, while simultaneously legitimizing the serious academic nature of right-wing Christian journalism. We wore suits (men) and skirts (ladies). We took impeccable notes, learned about the dangers of plagiarism through a screening of Shattered Glass, and we were told that there was no contradiction between writing objectively and writing with a Christian bias.

In our downtime, we could wear what we liked. Thus the Chuck Taylors, along with my collection of rubber bracelets and other items collected from Hot Topic. I had a green care bear t-shirt, and once I caught the boy staring at my chest. “I like your bear,” he said, and to me this was the highest form of flattery.

I was the kind of kid who was not exactly cool, but not exactly uncool either. At this camp there was another girl who also wanted to stand in the glow of the boy. She followed me like a leech. I was embarrassed by her, sure that she was using me to climb up the ladder of cool, when I still had so many rungs to go.

The three of us snuck into an empty building on campus one night to watch Se7en on the boy’s laptop. We found a dark common room with a couch. He sat in the middle. The volume was so low we had to press against each other. Around us, the building stretched away on all sides, echoing empty halls that made my skin prick. When a counselor discovered us halfway through the movie the boy slammed the laptop closed and we slunk away in proper shame.

He said he’d kissed a lot of girls. Just dropped that casually into conversation. Once he’d kissed a girl he didn’t know in an elevator. I had kissed zero boys. Maybe he would kiss me. I had a sort-of boyfriend back home in the real world, but so far he had failed to provide any kissing. We were allowed to have telephones in our dorm rooms, so when my parents dropped me off they ran to Wal-Mart and bought me a generic plastic phone with a cord. The first time my boyfriend called, I spoke to him for a few minutes while hovering in my doorway, listening to the laughter of other students in the hall. Next time I just let the phone ring.

We spent a lot of our downtime in the dorm hallways, sitting on the carpet, leaning against the walls in rows, just talking to each other. Once we made a massage chain, everyone working to position themselves between the right people. I wanted his hands on me. I wanted, for once, to receive and not to give.

On the last night of camp we were joined by one of our teachers, Bob Jones IV, descendent of the infamous founder of Bob Jones University, a wildly conservative college known for banning interracial relationships right up until the year 2000. This Bob Jones told us he had abandoned his birthright as university president because he was too liberal for his family, opting instead to become a writer. He sat casually on the floor, answering all of our questions like he was one of us. I was in awe. His rebellion was small, but to me it seemed like a giant leap, an act of intense bravery.

There was another girl at the camp who smiled like she had a secret. Her eyes were huge and dark, and she wore delicate dresses: she was Amelie in living form. She listened to bands like Mazzy Star, the kind of music I’d never even heard of. The boy loved this about her. Long after camp was over I bought a Mazzy Star CD and listened to it over and over in my bedroom, trying to find the magic in it, but I could never convince myself to like more than a song or two.

Once the boy discovered this girl, he was gone, slipped right between my fingers. I knew it for sure on the day we practiced photojournalism on the streets of Chattanooga. The assignment was to document people working in the city. She and I trailed the boy all over downtown. She barely spoke, just kept smiling that mystery smile, like she didn’t much care about any of it. I struggled to find a theme for my project, forced to take pictures of whoever the boy found interesting, trying to snatch snapshots that could be my own, then running to catch up with the two of them. I resented him for reducing me to a girl without her own point of view, but it was too late to find another partner. When they put our photos up on the projector that night I looked down at the table as mine clicked by, hoping nobody would notice their half-heartedness.

A year later, when I walked into studio art class in my first week of college at a small liberal arts school in South Carolina, there she was. Just as serene and large-eyed as I remembered, but she didn’t remember me. Her paintings were good, mine adequate. I was still copying other people. I was too afraid to ask for her friendship, but I did get the Facebook version.

I found the boy on Facebook, too, because he was friends with her. A few years later I sent him a message. I had just transferred to a different school and changed my major. It felt like anything could happen. At the time he was a student at Patrick Henry University, dream school of all evangelical homeschoolers, called “God’s Harvard” in a book by Hannah Rosin. He was between girlfriends and happy to talk to me. Ride the train up and meet me in DC, he said, where we would drink red wine and smoke weed. I pictured us falling into each other in a drunken glow, starting a whole new life. I never took the trip, but he did send me a mix CD. He wrote on it in sharpie: “This year will be different. Things will change.” And it was true.

These days, we get to know the rest of the story. The internet does that for us. I’ve seen photos from both of their weddings. As far as I know, nobody who attended that camp has stormed the capitol or changed the course of American history.

But there was another girl from journalism camp, one I didn’t pay much attention to at the time, who also found me on Facebook. We didn’t know each other at all, but I watched her life unfold like a story. Soon after high school she was pregnant. She did not get married. She did not settle down. She moved to Alaska, where she raised her son on her own, tramping through the snow with this child like a happy elf in his brightly colored winter clothes. To me it looked a lot like bravery. 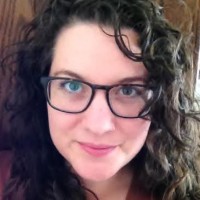 Leanna Moxley is a writer and a teacher, but she spends most of her time waxing nostalgic on Tumblr.