In Defense of the Middle-Aged Music Fan

So you’re a twenty-three year old guitar genius whose band is finally making a name for itself, not to mention some money after too many years of subsisting on Top Ramen, PBR, and a prayer. You’re ready to reap the rewards of being fresh and sexy, and harvest the nubile adoration that is yours by virtue of your face-melting musical prowess. The last thing you want to see when you gaze out in the audience is a room full of people who look just like your parents.

But as a middle-aged fan of much younger music, let me school you for a moment on why you might want to welcome those moms and dads into your fan kingdom not just with open arms, but with specific intent.

1.) We yearn not just for tickets, but “premium experiences.” We remember fondly our mosh pit days when all we had was a general admission ticket and a $5 bill for a night’s worth of beer. But that doesn’t mean we won’t occasionally spring for a VIP ticket that allows for a meet n’ greet, a sound check, and a seat in the roped-off area with an unobstructed stage view. Many over-40 fans have enough things. Our things are suffocating us and causing us to seek therapy. What we crave is experience. As long as the record industry is still dicking around with the royalties that, if there were any justice, would be in your pocket, the surest way to a steady revenue stream is to offer some extra cool experiences to people willing to save up for them.

2.) We still, occasionally, buy albums. We have our iPods and we download singles, just like everyone else. But some part of us yearns for that full-body immersion into the album like we had in the ‘70s and ‘80s, when we ripped the plastic wrap off the album or CD and told our parents not to bother us for the next twelve songs, because Lisa and/or Kenny told us it was imperative to hear the album front to back if we really wanted to understand it. If your band will go to the trouble of making an album that is a story, put some thought into your track listing and our journey, we’ll spend the time to hear you out. Once a liner note reader, always a liner note reader.

3.) We are statistically more likely to drink top shelf liquor and less likely to puke it back up on the floor. If your pay at a club is calculated as a percentage of the bar tab, then you need some over-40 people in the crowd to counterbalance those whose main strategy for sticking to a budget is to get their drink on before they go out. We midlife fans are not afraid to pay a little more for an imported beer, when we can afford it, or a drink that is not on the Specials menu.

4.) We’re sharing music with our kids. Speaking of that high schooler, realize that times have changed. It’s not like our parent’s generation, when our grandparents actively hated Elvis and Jerry Lee Lewis, or even our generation, when our parents simply ignored our music because they were all getting divorced. We are Generation X. We feel real sadness when our kids are old enough to attend concerts without us. We grew up with punk rock and garage metal and the Beastie Boys. There is no music you can throw at us to scare us off.

5.) We are more likely to watch you with our actual eyes, not through a smartphone viewfinder. Maybe that’s not a problem for you. Maybe you don’t mind singing to an audience that appears to be composed entirely of digital screens and the thicket of forearms that hold them aloft.

Barely visible to the left: two members of Bastille at a recent in-store concert at Amoeba Music in Berkeley CA. All other band members obliterated by youthful forearms.

But if you ever want a moment of connection with an audience member who is present in the moment, absorbing and responding to the sound wave that you’ve created in real time, look for gaps in the Field of Screens for the lined face of the forty-something fan who is watching you right back.

Because we save our odious, interminable filming behavior for our kids’ dance recitals.

5.) We’ll render your PR campaign superfluous. Look, most of our Facebook status update relate to politics or our kids’ soccer tournaments. If we have a chance to brag that we were out at a show to see a band that is cresting on the Billboard Top Alternative Albums chart, we will shout it from the digital rooftops. We’ll tell anyone who will listen that we stayed out late to see you play. And we’ll wear the merch we bought with your band name to the grocery store, the PTA meeting, and on our morning run, smugly telling our friends that they have to check out your new album.

The symbiosis couldn’t be more complete if we were sharks and remoras. Which, by the way, would be an awesome album name for you to put on the t-shirt we’ll buy from you. Thanks, and you’re welcome. 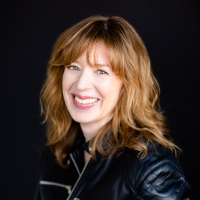 Nancy Davis Kho is a writer in Oakland, CA whose work has appeared in The Rumpus, the San Francisco Chronicle, the Morning News, and Skirt! Magazine. An avid music fan, she writes about the years between being hip and breaking one at MidlifeMixtape.com.