On Not Having a Story About Losing Your Virginity

When was your first time? What was it like?

These are bonding questions in this society, in which we are supposed to gain intimacy by sharing the the awkwardness and gentleness and oddness of our burgeoning sexualities. There’s a whole show devoted to the question, in which John Stamos interviews celebrities about their first times.

It is a question I dread.

I have no idea when I lost my virginity or what it was like. I know for sure that the first time I had sexual contact with another person, it wasn’t consensual. Nonconsensual sexual activity was all of the sexual contact I had until my mid-teens, when I just started performing sexuality by rote because that was what I knew from experience that people wanted from me (I call this “marginally consensual” because it was certainly not for my enjoyment, though it was something I engaged in willingly – there was a history of force behind it.) Sometimes I refused to perform it (the closer you were to me, the less I would be able to have sex with you) because that is how warped my idea of sexuality was. It was the furthest thing from an intimate act. It was a transaction.

It took me years and many patient, loving partners to engage in sex that was truly mutual, thoughtful and in which I wasn’t operating in some way from this idea that sex was something I needed to do to be loved or valued and that whether I actually wanted to or not was really part of my decision to do it or not.

I know a lot of other people who have versions of this story, who get queasy and shaky like me when we’re asked when we lost it because we don’t know, and/or we don’t want to relive a sexual assault, and we know that inevitable sideways look: “Oh, poor thing” mixed with “Ooh, you’re dirty.” We know the judgment. We know the internalized shame, which we should not have to know, because being sexually assaulted wasn’t our fault.

Losing your virginity is, at the root, about having heterosexual penetrative sex, even though that’s not how a lot of us on the queer spectrum have everyday sex with our partners, how we have everyday orgasms. That’s how you end up with people who will engage in all manner of sexual activity except for heterosexual penetrative sex because holding onto their virginity for a First Love or for marriage is important to them. It seems like that involves a good amount of cognitive dissonance.

How weird is it to define a social coming of age with something some of us on the queer spectrum will never experience?

Consider, too, writing by women of color about how they are stereotyped as inherently sexual in varying ways based on their skin tone and ethnic origin. Most of the mainstream “losing your virginity” stories in our society, American Pie, and so forth, are white stories. We have no real mainstream voice for what it means to “lose your virginity” in a society that sexualizes your body nearly from birth. If we were to have that conversation, it would be a powerful one, and a difficult one, and a necessary one.

How else do you tell a coming of age story without an awkward early sex story? (There are many ways, I think, many other rituals that signify becoming an independent adult – your first job, your first apartment, your first real adult mutual romantic love, and so forth.)

Sure, there are plenty of people out there who “lost their virginity” in a totally banal way that fits with the standard mainstream narrative, who imbued the whole thing with a lot of meaning because that’s what we’re supposed to do but who found it lacking in the end. That’s why the pop culture stories find resonance: because there are a lot of people who they fit.

But there are also lots of us who don’t fit. And if we are to truly tell the brilliant, true, real stories of those of us at the margins (it’s no accident that those of us who don’t have stories who fit the traditional virginity narrative are statistically more likely to be queer, poor and/or of color), if we are to allow space for those stories, we need to reframe the idea of “virginity,” ditch the whole idea that having a certain kind of sex – and only that certain kind of sex – is a passageway into adulthood. For those of us whose first sexual contact was not consensual, we need a space free of blame and shame where we can talk about how that affected us and may continue to affect us.

I’m 34 now, and it’s been well over 20 years since I first started to process these things. More and more, I think the idea of virginity, of some kind of blank slate, of “purity,” is a dangerous one. I think about how the idea that kids are “pure” pops up often in interviews with those who abused us, that our “pureness” and “innocence” makes us desirable to them (even though we were children, not sexual beings; I cannot stress enough that children cannot consent.) What would it mean to abolish that idea entirely? Would it strip a child sexual abuser’s excuses to the world and expose them as the hideous abuse of power they are?

As kids move into their teenage years and start to explore their sexualities, what they need is well-rounded sexual education – not just the basics about STDs and puberty (though that’s a good start), but training about consent, how to talk about it, how to respect your partner(s), the many ways “no” can manifest and how to check in and communicate with your partner(s). Sex ed isn’t just about the physical act of sex – it should be about relationships, about power dynamics. There is an enormous amount of pressure around losing your virginity – if you lose it too young or too old or in the wrong circumstances there’s something wrong with you, if it’s a queer relationship it doesn’t count – and that’s hard for teens to bear. It’s hard enough figuring out who you are as a teen – your sexuality being part of that – without all that extra social pressure.

It’s taken me a long time, as I mentioned in the beginning of this piece, to get comfortable with my sexuality. I knew I was attracted to more than one gender from a very early age (somewhere in a black and white composition book there is a drawing by yours truly, age 4 or 5, that has a drawing of some triangles with eyelashes and high heels floating above the ground that says I LIKE PRETTY LADYS), and I was lucky to have parents I could come out to who supported me and always will, so that aspect of my sexuality wasn’t much of an issue. It was the performance of said sexuality that was a problem. I had trouble, because of the abuse and because of larger social pressures, feeling like my sexuality was something I should feel compelled to perform at all times. Figuring out how to have sex on your own terms when you don’t even know what those terms are or should be – when your comfort, your pleasure has been an afterthought your whole life – is a difficult thing. Luckily, I’m pretty much there. I can and do stop myself if I feel like my desire to be wanted is more than my desire to actually have sex, and I have an active, healthy, happy, loving sex life and a long-term partner who gets it on all levels and who I feel safe, trusted, and respected with. That wasn’t something I always knew to look for in relationships.

I’m one of the lucky ones, and that’s because of wonderful partners and friends and therapy and work and resources. We should all be so fortunate – it’s going to take a lot of systemic dismantling and rebuilding before everyone has access to those resources in equal measure and we live in a society that understands and respects and teaches consent and respect and bodily autonomy for all. And one of the pieces of that puzzle, one of the things that has to be questioned and taken apart, is the idea of virginity, because the purity narrative does far more harm than good. 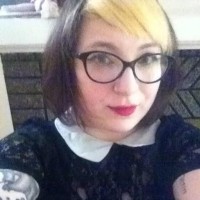 Jessica Skolnik is a freelance writer, blogger and community organizer in Chicago. She plays guitar and sings in the band Split Feet.