I think I can remember the first time I swam in the ocean. I can definitely remember my first concert (Prince—great) and my first French kiss (back of a school bus in the seventh grade—not so great). If pressed, I can call to mind my first roller coaster ride and the first horror movie that slackened my jaw. But I can’t seem to recall my first visit to a shopping mall. I can never pin down the first time I ate at an Applebee’s or played mini golf or hung out in a gas station parking lot or drove around in a friend’s old Toyota, listening to Dave Matthews and Rusted Root, smoking cigarettes, trying to figure out how to fill the night.

I do know when the dream of the suburbs began to die for me—I can locate that moment when I became grateful to be from New York City and stopped believing that my life would have been better, easier had I been born in Cherry Hill or Westfield or Bridgeport—but I’m not quite sure when the dream began. I can’t remember when or how I fell for the suburbs, but I believe the love was urgent and long-lasting. It was an affection that gave me permission to dream and imagine that the idea of a mowed lawn held nothing but promise.

I read a lot as a kid. I’d pick up anything that came my way, but I had a particular fondness for young adult thrillers. At ten years old, I had frizzy bangs, a large head, and a collection of books by Christopher Pike, R. L. Stine, and Lois Duncan. These were tales of kids in trouble—seemingly typical suburban teens who had sex, drank too much after football games, and occasionally murdered an intolerable teacher. The scare factor was certainly appealing, but I think what tugged me about these stories, what involved me in a gut-level way was how perfectly foreign they felt from my experience. Every book took place on little streets in little towns far from where I grew up in the Bronx. Parents lived in the same house, dinner was on the table at seven, there were sibling fights over who got the car on Friday nights.  These kids I read about—kids named Chris and Sarah and Jennifer and Matt—played field hockey and lived in houses with swimming pools. They had curfews to follow and midterms to take. They hung out in malls and diners, they had school colors.

Now some of this was already within my frame of reference—I wore ragged my VHS copies of Can’t Buy Me Love and Adventures in Babysitting right around this time. And in the fifth grade, I went to a sleepaway camp in New Jersey with kids from West Orange, Short Hills, and the Caldwells. I met fifteen girls named Caitlin that first summer. I learned about the difference between lacrosse and badminton. I saw bouncing ponytails of the brightest yellow. My camp was only 70 miles from the city, but it could have been in Burkina Faso, it felt so very different from what I knew in New York. Over the years, my friends talked about cheerleading tryouts and homecoming games and older brothers who played music out in the garage and decorating their lockers at school and dry humping in the backseat of a Volvo and family dinners and running into Billy Schneider at the mall on Saturday and he finally got his braces off and he looks so frigging cute and he better ask me to Winter Formal.

When I was ten years old, I moved in with my father, a bachelor musician who lived on a quiet, tree-lined street in the Bronx. He wasn’t strict about bedtime, we ordered pizza or Chinese for dinner, he played guitar as we watched Terminator 2 or The Cutting Edge on cable. I took the #12 bus to the #6 train to get to school each day, and I read during my commute. My dad often had shows at night, and sometimes I’d tag along. If I stayed home, I’d do my homework, order some dinner, and read. I was young. I wanted to dream. I was outgoing, but lonely. And hungry for something I couldn’t quite name. My reading had endowed me with an imagination the size of a Jeep Wrangler and I clung to my books, relied on John Hughes’ movies. I needed those stories from my friends about family vacations and junior prom. These tales from the suburbs were my escape. They soothed the ache of real living and gave me permission to fantasize that life could get good if I had two parents at home, a driver’s license, and a ruddily handsome, football-playing boyfriend named Chad to kiss me at the movies and take me to prom.

I’m talking about a delusion here, and it was a painful one. As I grew up, as I left behind the itchiness of prepubescence and moved through the unceasing, essential horror that marks one’s teenage years, I continued to rely on the fantasy that things were better out in New Jersey and Connecticut. All I could do was dwell on what I didn’t have. All I knew at that time was what I wasn’t. This feeling—I’m nothing, everyone else has it figured out—is one of life’s invariable constants. But it makes you feel like doggie doo just the same, and ignores an essential truth—that living is hard and painful and humbling in the saddest ways for everybody. Yeah, but they must be happy—they live on Oak Lane and have two cars! Maybe, but most people don’t likes to wipe their asses or take out the trash or lose a parent or be smacked by someone they love, and it’s just how it goes.

After I graduated from high school, I didn’t go to college straight away. I spent a few years wandering around and going to the movies and being broke. A few of my camp friends thought a break from New York might be fun, and so I spent a year couch surfing around Essex County, New Jersey. I learned to drive, I worked at a YMCA, I went to high school basketball games and middle school musical productions. I shopped at Wet Seal and Abercrombie and Fitch, I had make-out sessions in the back of a Camaro. I listened to Sublime and drank frozen drinks at Ruby Tuesday.

During a barbecue, I cracked open a can of beer on my friend’s back porch and felt the wooden planks under my bare feet and knew I was alive. I thought, finally, yes, fantasy becomes reality. That’s what I told myself. If I had been made of sterner stuff back then, I would have admitted that though the external trappings were different, my life pretty much felt the same. And my dream felt borrowed—snatched from a younger version of myself who had had different needs. I was definitely having fun on my suburban walkabout, but it had little to do with the idea of the place and more to do with moments filled by the people I loved.

I still have all of my Christopher Pike books. My collection has grown over the years to accommodate Judy Blume’s oeuvre, the Sweet Valley High series, and every Baby-sitters Club book. When I want a little break, when I need to be reminded of how sweet life is, I let these bad boys do their magic. They reignite my dreams, and I just know that all I need to do is get out to Mockingbird Lane and pluck that low-hanging suburban fruit. 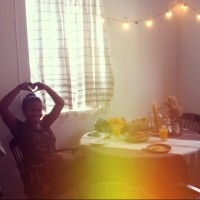