As The Toast searches for its one true Gal Scientist, we will be running a ton of wonderful one-off pieces by female scientists of all shapes and sizes and fields and education levels, which we are sure you will enjoy. They’ll live here, so you can always find them. Most recently: Why We Study.

“You know about the drop-off between women who get PhDs and women who become faculty, right?”

It was my first interview for a neuroscience graduate program and I had spent the last twenty minutes explaining my honors thesis project and why exactly I never wanted to go near an electrophysiology table ever again. The question came out of left field. My college was a fairly typical liberal arts school, meaning there were more women than men, particularly in the biological sciences. But most of those students were planning to go on to medical school. I could count on one hand the number of people I knew going on to get a PhD in science.

I lied and said that I did. What followed was a discussion of why this gap between the number of female doctoral students and the number of female faculty existed and what did I think about it, and did I have plans about what I wanted to do with my PhD? At the time I was relieved to be talking about something that wasn’t over my head—I’d been terrified by tales of students being quizzed on neural circuits by their interviewers. But now, having been immersed in the intense world of academia, I am uneasy.

It is true that many, if not the majority of, those receiving PhDs in the biological sciences in this country are women. My own class is 60% women, and every one of my female classmates is brilliant and incredibly hard-working. But the fact is that statistically only one of us will end up as a full time professor. According to the latest data from the National Science Foundation, only one fourth of all full-time, full professors of science are women. Women with doctoral degrees in the STEM field are also significantly more likely to be unemployed or employed only part-time, and to cite family responsibilities as the reason for that unemployment.

While these statistics are fairly well-known and discussed within the science community, what is being done about them is less clear. For a scientist at any level, obtaining funding through the grant writing process is absolutely crucial for demonstrating success—and to pay for one’s research. The most sought-after grants come from the National Institutes of Health. They are particularly critical for post-doctoral students, scientists who have earned their doctorate but are continuing their intensive research to build up their credentials before applying for faculty positions. But here’s what I didn’t know until I got to graduate school and started talking to older students: if you stay at the same institution for your post-doctoral work as you did for your graduate work, your application for these NIH grants won’t even be considered.

The requirement is in place because the NIH wants to encourage young scientists to branch out from the influences of their doctoral program and university and be exposed to new ideas. This sounds well-intentioned, but packing up after over five years of study and moving to a new city for a few years isn’t always possible. The students I’ve spoken to who have been disproportionately affected by this unspoken rule are women with families. They are scientists who finished their doctoral degrees while having children and who cannot or will not pick up their families to move to a new city for what may be only a year or two of training before moving to the next lab. All of them are working on substantially different projects in new labs. But because they’ve remained at the same university, they are cut off from the grants that would be most helpful to their careers and their futures.

So what, you may ask, are all these women who have their PhDs but aren’t working at a university doing? They’re working in industry, at consulting firms, writing or editing scientific journals, shaping our nation’s science policy, or any number of other options open to those with their expertise. Many of these other career opportunities have more flexible work schedules and allow more time for women to spend with their families, if that’s what they choose. But it can be hard to go about getting on of these jobs once receiving your doctorate—the idea of not going into academia is still a kind of taboo in graduate school. Some students are afraid to even mention their interest in applying outside of the academic world to their advisors. And it’s often difficult to find these career opportunities without the support of mentors.

Some organizations are working towards change. In early November, the Society for Neuroscience held its annual meeting in San Diego. The meeting is five days of talks, poster sessions, committee meetings and socials bringing together over 30,000 neuroscientists from around the globe. This year, the program included a symposium on Gender Bias in Neuroscience, a three-hour series of talks by four speakers. These talks ranged from addressing the statistics (if we stay at the same promotion rate, we will have 50% female neuroscience faculty in 2117) to “benevolent sexism” in which women are given more positive feedback but less challenging assignments. Muriel Niederle, an economist at Stanford, addressed the drop-off, also called the “opt-out” phenomenon. She believes that competitiveness is an important factor, citing studies she’s performed in the Netherlands that suggest that high school girls’ level of competitiveness is indicative of their likelihood to enter “prestigious” academic tracks, including STEM fields.

I, sadly, was not able to attend this symposium. I was presenting a poster on my research at the same time, while receiving texts and Tweets from friends who were able to make it. I stood in the bathroom, fixing my make-up and changing into uncomfortable high heels with dozens of other women as my phone lit up with messages. “There’s barely anyone here,” read one. “The crowd is 95% women and the first person to ask a question is an old white man,” read another. The irony was not lost on me.

As a non-competitive female scientist, I worry about what will happen when I leave my cozy graduate cocoon. I’ve spent the last three years chipping away at my thesis project and realizing with each step that I’m increasingly unsure that I want to be a neuroscience professor. The statistics are scary, the culture is intimidating and I have come to realize that while my love of the field of neuroscience is unchanged, my skills and abilities lie outside of the lab. My drive to succeed does not seem to point in the direction of NRSA and R01 grants. That girl who sat in that interview and stated so confidently that she wouldn’t be part of the drop-off is suddenly looking for the door.

It’s both terrifying and a great relief to write these words. I don’t want to be another statistic, another PhD who didn’t live up to her potential. I don’t want my professors, the people who have taught me so much, to see this and be disappointed in me. I don’t want people to point to my choices and see them as representative of other female scientists. I want them to understand the factors that led me to this choice. But I also have to wonder how different I might feel as a man making this decision. I know I would never have spent that interview talking about the drop-off. Would I have noticed the way my female friends struggled to balance having a family and being a successful and competitive scientist? Would I feel the same fear to discuss my future with my advisor? Would I be more inclined to tough it out in academia if the statistics were in my favor?

I may never know. But I can’t regret any of the choices that led me to this point. I may be part of the problem, but I’m excited to be part of the conversation that ends it. 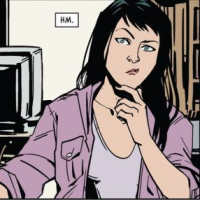 Maya Sapiurka is a Ph.D student in neuroscience who loves that she gets paid to play with brains. In her few hours outside the lab, she also enjoys fandom, feminism and reading anything she can get her hands on.