Gal Science: In Which We Learn About Endosymbiosis

As The Toast searches for its one true Gal Scientist, we will be running a ton of wonderful one-off pieces by female scientists of all shapes and sizes and fields and education levels, which we are sure you will enjoy. They’ll live here, so you can always find them. Most recently: The Drop-Off.

Ed. note: This one is a little butcher and more science-y, but I feel like I learned a lot! And there are cool pictures at the bottom.

You know how if you eat a watermelon seed, if you forget to digest it it sprouts inside you and grows in your stomach? A plant obviously can’t make watermelons without lots of foliage, so vines spiral down your limbs and prickled leaves press against your now transparent skin and crowd the area behind your eyes. When the watermelons grow within you, they are the only food you need, and your organs suck them dry one by one. When you bear children, the fetus grows with watermelon seeds already waiting within its chest. Your fate is entwined with the watermelon now – you are more watermelon than human. You are a vehicle for the watermelon to move.

If you tweak that story so it applies to cells, you have endosymbiosis; the basis of all multicellular life. Cells ate other cells and neglected to digest them, and now they just hang out forever, like nesting dolls. (That is a literal translation of endosymbiosis.  If you know classical languages I am thus far worthless.) It’s how cells with nuclei got chloroplasts – for photosynthesis – and mitochondria – for processing energy. This is a strange twist of our understanding of evolution – the idea that the very building blocks of life resulted from collaboration instead of competition.

The reason that collaboration is a surprise is because our first explanation of evolution sprang from questions about competition. Several nice clergymen from the most powerful empire on the planet noticed that “The power of population (growth) is indefinitely greater than the power in the earth to produce subsistence.” They realized that famine and disease were the natural results of this fact – and that the organisms that survived the famine and disease bore the future generations. One of them realized that traits that helped an organism survive famine and disease – traits like having a bit of a belly when circumstances allowed – would be present in that organism’s offspring. Evolution, they said, was a race to stay slightly better than the neighbors in the face of approaching calumny. That is what almost everyone who understood evolution believed for a hundred years.

But this reliance on competition eventually lead to a puzzle; organelles such as mitochondria and chloroplasts have their own DNA, and that DNA never goes to or from the nucleus. These organelles are a huge advantage – mitochondria take many forms of energy and turn them into the fuels cells use best, and chloroplasts allow an organism to harvest food from light. How do the genes of these organelles get passed on to future generations? How do organisms preserve this massive advantage?

It wasn’t until the 1960s that Dr. Lynn Margulis solved the puzzle by introducing endosymbiotic theory.  Instead of following the standard competition theory she believed cooperation was key to life. Because of this shift in perception, she had the insight – and the drive to methodically and thoroughly research said insight – that they were the results of two organisms cooperating – possibly not willingly, but in a form of symbiosis more intertwined than any that had been documented before. She documented the organelles dividing like bacteria, she found species with traits intermediate to free-living bacteria, she recorded similarities in genome shape, cell membrane character, and metabolism.  The evidence mounted, and the skeptics were converted. (Or they died.  That is one of the ways scientific progress is made.)

Cooperation of organisms seems like such an uplifting way to look at the world! Dr. Margulis didn’t stop at endosymbiosis – she thought that things like nuclei and flagella and all the cool stuff in the cytoplasm of Eukaryotes came from other, earlier endosymbiotic events. (which is possible) She co-developed the Gaia hypothesis, which held that the planet regulated itself – via cooperation of living things: kinda like an Orson Scott Card novel, only not *spoilers* because of alien terraforming. Don’t worry about the carbon emissions, guys! The algae will take care of it! Don’t go check on the ice! She also thought that HIV was not the thing that caused AIDS – undetectable syphilis trying to sneak things – cooperatively – into our genome was causing AIDS. In both of the later cases, she did not do the excellent labwork that she did for endosymbiosis – resulting in science whose shoddy support is unpleasantly similar to that of the scientists who shot down her early theories.

I’ve talked about Lynn Margulis for 400 words without mentioning who her first husband was. Join me in not treating that like the most important thing about her.

Instead, here is the story of the first endosymbiotic event. (It’s chloroplasts (pictured), because I like plants better than everything. The story for mitochondria is similar.) A long time ago, there was a free-living predatory single cell with a nucleus and everything. It probably ate mostly bacteria – engulfing them and sealing them in food vacuoles. (It’s like if you have a partially inflated yoga ball and you poke it with a stick. The stick goes into the yoga ball, and then eventually the skin of the yoga ball seals again where the stick went in and the stick lies within the yoga ball, encased in a bubble of inside-out yoga ball skin. This skin has the proteins necessary to digest the stick, and the nutrients from the stick are used by the yoga ball to survive and prosper.) Once, the cell ate a cyanobacterium – but for some reason didn’t digest it (like how your yoga ball refrains from digesting you). Cyanobacteria are gorgeous blue-green bacteria – oh look, people with rudimentary classical language skills are still not impressed – that are probably the first things to develop photosynthesis, and are still around, causing trouble. Spirulina – from the algae protein shakes – is a species of cyanobacteria. So are most toxic algae blooms.

A word about being small and moving. When you are small, water is thicker. It has a consistency somewhere between molasses and modeling clay; it’s basically quicksand. Imagine swimming in quicksand; any attempt to swim upward or forward requires that you move a limb – you will move forward, and then when you move your leg back for another stroke, the movement sucks you back to your original position. What you need are either propellers – which your legs are not excited about – or deformable oars – things you can take a stroke with, and then change into a low-profile shape as you move them back into position. You’ll need something like arms.  Or flagella – which can act like arms or propellers. Or a much larger friend who will schlep you about and save you the bother of figuring out how to make flagella.

The reasons a human wants to avoid being completely submerged in quicksand are legion – breathing, conversation, ability to warn others about quicksand – but the very thick water that tiny things live in is home. It’s obvious why the predatory cell needs to move – because hunting in quicksand is hardcore – but why do cells that photosynthesize their food need to move? Well, it’s not just quicksand, it’s quicksand with lots of different densities based on temperature and dissolved chemicals. The different densities are about as easy to mix as the previously mentioned molasses and modeling clay. If you crap into the quicksand, your waste – being full of chemicals you want to get rid of – will be a different density than the surrounding quicksand. You, a small thing, are trapped in a viscous bubble of your own crap. You do not enjoy this. You would rather be in a place with less of your waste. So you swim – you try to swim faster than the rate that your waste products diffuse out into the great wide sea of the world. Like a functional alcoholic.

This crap-escaping cell and its internal cyanobacteria are the ancestors of everything that photosynthesizes that is not cyanobacteria. This is the direct ancestor of the plants – which is ironic, given that the massive evolutionary advantage to endosymbiosis was better mobility, and the tendency of plants to stay in the same place. (I had to check for actual irony three times.) It’s also the ancestor of all of the red algae (like nori) and green algae. Brown algae (like kelp) and diatoms have a more complicated evolutionary history – it involves secondary endosymbiosis. This is the result of another predatory cell that ate one of the descendants of the first predatory cell and did the whole evolving symbiosis thing over again. At some point, a dinoflagellate ate a brown algae, because secondary endosymbiosis is not good enough, and lo: tertiary endosymbiosis.  (Dinoflagellate means terrible whip, because their flagella is very visible and because they are terrifying.  They are single cells that hunt fish. They secrete a toxin that will melt flesh off fish that are several feet away – and then they eat the fish. The toxin is also bad for humans – mostly thus far for people who research it. There, Latin/Greek speakers.  I’ve proven my worth.)

Think of the strange, sticky, dense world of water for single cells. Think of a life navigated using light-sensing spots and detection of chemical gradients. Most species seem to lack the ability to sense their own waste products – so they just swim and swim forever, because constant frantic movement is an adequate substitute – on an evolutionary scale – for being able to detect why movement is necessary. Think of stuff that gets lumped in as “primitive cell stuff” – the ability to make food from light and the possession of a tiny spinning wheel with a long protein strand attached – as things that are so difficult that each trait has evolved once, while setting up shop inside another cell and working together for a billion years has happened a dozen times. I can’t normally talk about endosymbiosis without hand gestures or shaking anyone or drawing many blob-shaped diagrams, but I hope I’ve shown you how much I love this set of data – and how considering small things makes the world seem larger.

The chloroplasts are green because they are full of the pigments that do photosynthesis.  The rest of the cell components are not brightly colored because they are not chock full of essential pigments.

I wanted algae photos, but algal endosymbiotes tend to fill the entire cell to maximize food production – or they are. Look at this moss though!  Look at all the chloroplasts in a tiny sea of moss cell!

Here is an algae photo; note how the chloroplast is a spiral.  I don’t know how it does that. 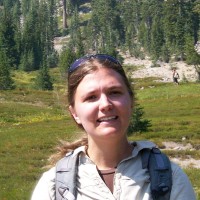 Jane Van Susteren is a California botanist, ecologist, and virtual xenobiologist. She's pretty sure that last one is entirely made up.