Coming Out as Biracial

(me and my sister, respectively)

A few months ago, I not-so-subtly asserted myself as biracial while having dinner with a new coworker. “I’m a Capricorn,” she’d said. “Yeah…my mom’s black,” I responded (not verbatim, but the exchange was similar). Whoa. What? Immediately after I injected that part of my identity into the conversation, I had a come-to-Jesus moment. What was I doing? Did I always do this when I met new people?

The answer, if you’re wondering, is yes. (Although the timing and context are usually a bit more appropriate.) I’ve been coming out this way since I was a teenager. First, my friends would do it for me, whenever one of our peers said something racist in front of me (which was often). “Dude. Steph’s mom is black!” The requisite retort was always, “Oh, sorry, Steph. Are you half-offended?” (No, but I am wishing tired-ass jokes qualified as hate crimes.)

Here it is: My mother is black. My dad is white. Two of my siblings look like my mom, and two of us look like my dad. Of the two who favor my dad, only one is biracial — that’d be me, the pigmentally challenged Michael Jackson of our troupe. Are you confused yet? Good. Welcome to what it’s like to be biracial.

I grew up in a culturally diverse environment, which meant I missed the memo that it’s “not normal” to be mixed. In fact, I grew up believing the opposite — in my grammar school class of thirty kids, five were mixed race. Not a bad ratio.

So I didn’t discover my otherness through being teased by peers or by having after-school-special chats with my parents. I discovered it in other ways, like when strangers would mistake my mother for my nanny, would stare at a black woman holding a white child’s hand in the middle of a crowded flea market. Or when I finally figured out why Mom always stayed home whenever we visited Dad’s parents in Florida. I figured it out when I began obsessively clipping photos of Tyra Banks from my mother’s Victoria’s Secret catalogs and when I began hoarding pictures of my aunt, who I didn’t even like but thought was beautiful. I was collecting portraits of black beauty I couldn’t have for myself.

Because my exploration of race was largely internal, I spent much of my adolescence identifying as … well, whatever I wanted. Sometimes I’d simply call myself a mutt. Other times I’d list each nationality I owned, no matter how little cultural influence it had over me: Greek, Grenadian, Native American, Panamanian, Irish-Scottish (the last two were a stretch). My preferred identity, though, was one that didn’t even belong to me. In middle school, I began telling my classmates I was Hispanic. All my friends were, after all, and I quickly learned I could manipulate my hair and style to look the part. When I did this, I no longer had to explain my mother’s brown skin. I no longer had to come out.

Even with this solution in place, a certain fear lived in me. I was afraid of mispronouncing foreign words that effortlessly rolled off the tongues of friends, afraid of being invited to dinner and not knowing the Spanish words for the foods I was eating. Most of all, I was afraid my friends would talk to my parents and realize that my roots were rooted in lies. I didn’t belong anywhere, and I was ashamed of it.

At thirteen, I moved and got a chance to reevaluate my identity. My new school was predominantly black, so copping to what I was — black and white — was easy. Sometimes, anyway; other times, I was exposed to white kids who would speak their minds on our black classmates whenever they were under the impression they were in good (white) company. I realized how few people believed me about my mother’s race and wanted evidence, and how it never got less frustrating to have to prove my identity, court-of-law style (note that, on the flipside, my black classmates celebrated my race, would tell me: ”I knew you were black!”).

(My mother as a teenager. She’s still just as gorgeous.)

Gradually, I learned how to parse my race, make sense of it on a personal level. Even with my white skin, I didn’t know the white experience entirely. I didn’t know it because when people use that poisonous n-word, I instantly think of my mother—and how people have used that word to hurt her simply for lack of time and effort. I think about the things my parents sacrificed to be together, things bigger than letters can spell. I grew up eating collard greens and black-eyed peas and other foods white kids in New York City never ate; I grew up knowing I was the fruit of something forbidden by family, strangers, you name it. I took my spankings with a helping of, “When I was your age, my mother would just go in the backyard and get a switch from a tree — you’re lucky it’s just a belt.” When #shitblackmomssay trended on Twitter, I laughed. I was on the inside of something, for once.

That’s not to say I understand the black experience. For starters, I have white privilege. Olive skin with curly hair, fine and versatile. Police don’t see me. No one follows me around stores (but they’re confused as hell when I come in to shop with my mother and sister). No one assumes I’m uneducated or that my father left me. No one calls me her token black friend or asks why I talk so white (though I can imagine my mother, sister, and brother have heard that one a bit).

And the biracial experience? Can’t say I understand that entirely, either. Depends on what we look like, on what we’re mixed with, on how we identify. I love this aspect of being biracial, but it’s also what makes it alienating. My sister has had a completely different biracial experience than I’ve had. We share the same parents—the same blood—and our experiences are disparate. Growing up, we had different friends, different hobbies. And it wasn’t a coincidence. Biracial people are largely invisible as a group; we get tossed into whatever category we resemble most. We’re expected to choose black or white (or Indian, or Chinese, or whatever traits dominate). But lots of us don’t want to quietly “Circle One.” Some things aren’t black or white. Like human beings.

I don’t know the black experience, and I don’t know the white one either. All I know is my own biracial experience, which looks like this: it’s strangers addressing you in Greek instead of English because your name is Greek and what else would you be? (I know two words of Greek.) It’s telling a new acquaintance you’re biracial, then furnishing a photo of your family when she insists that you’re lying. You have to do this, though, show her a picture — because you might be the one person who can change her mind about what blackness looks like. It’s census reports that won’t acknowledge you, and a white friend screaming the n-word through his open window because someone cut him off in traffic. It’s that same friend turning around to say, “Oh. Sorry,” as though the problem is that you’re in the car, not his own racist inclination toward someone he’s never met.

It’s your mom’s brown face floating in a sea of white at the Greek Orthodox church, which she’ll eventually stop attending. It’s not understanding why you’re still expected to go. It’s befriending someone great and immediately wondering if her mom, or brother, or grandparents will say something offensive in front of you because why would you care, you’re white, right? It’s segregated proms in 2013, sobbing over segregated proms in 2013. It’s mainstream Hollywood ignoring interracial relationships, even though one in ten Americans is in one. It’s Cheerios commercials and YouTube comments and knowing that somewhere, a total stranger has called your ‘kind’ “unnatural” or worse, just because your parents’ skin tones don’t match up. Who cares if they love each other? It’s knowing your parents’ new home state — Florida — will protect you before it protects your mother. It’s witnessing one of the most exciting conversations about race since the civil rights movement, and wondering whether you’re the white voice that should shut up and listen, or the black voice that should speak out, or the mixed voice that should ???. It’s the feeling that you belong nowhere, and not knowing what to do about that, and not knowing who to ask.

And it’s coming out. It’s coming out to strangers, and friends, and lovers on the off chance that you might convince them that race isn’t one size fits all. It’s coming out to see the look on some bigot’s face when he realizes his idea of white is wrong. It’s coming out so that interracial couples don’t have to fear the America their future children will grow up in. Looking like a white woman comes with white privilege, but it also comes with the responsibility of making myself known, of changing minds. I’m treated the way all black Americans deserve to be treated, and it’s only because my dad’s genes won a round of tug-of-war with my mom’s. My skin color is just a small joke that racists—career or casual—aren’t in on. 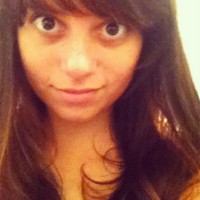 Steph Georgopulos works for Studio@Gawker, curates Human Parts, and sometimes updates Inklings. Her work has appeared on The Hairpin, Glamour, The Awl, McSweeney's, and elsewhere. She's on Twitter.