As The Toast searches for its one true Gal Scientist, we will be running a ton of wonderful one-off pieces by female scientists of all shapes and sizes and fields and education levels, which we are sure you will enjoy. They’ll live here, so you can always find them. Most recently: Lava Flows and Glass.

This piece was brought to you by a reader.

For the past six years, I’ve been working on my doctorate, which focuses in part on the immune response to Salmonella infection. In parallel to my thesis research, I’ve worked in science education, both with K-12 and college students, and found that even people who dislike or struggle with science love to talk about science in the context of movies and television; people who like science really love to do this. As such, I will now discuss a serious public health crisis as if it were a dinosaur adventure movie.

The 1993 film Jurassic Park has a lot to recommend it: the Spielberg-y nimble and emotional storytelling, well-rendered CGI dinosaurs, an agitated Samuel L. Jackson smoking a cigarette. But it also serves as a (admittedly obvious) metaphor for how humans try, and usually fail, to control the natural world. “Life, uh, finds a way,” says Jeff Goldblum, a few scenes before (20 year old spoiler alert) an escaped T-Rex tail-whips him into some palm fronds.

The “life” that finds a way need not be a enormous cinematic monster – it can be microscopic, like the bacteria that famously outnumber us, even within our own bodies. Bacteria coat our skin and our guts; they are nestled in the soil, floating through the air, swimming through clean water. Though this may seem like a Purell-fueled hypochondria nightmare, most bacteria are not harmful and many are hugely beneficial, such as the probiotic bacteria that Jamie Lee Curtis wants us to eat from those cute little green cups.

But, of course, some bacteria do cause illness. If bacteria get into our lungs and multiply there, they cause pneumonia. Bacteria in our urinary tracts cause UTIs and kidney failure; bacteria in our digestive systems cause gastroenteritis (diarrhea and vomiting). In short, pathogenic bacteria in an important place, such as the lungs, brain, guts, blood, or a wound, can wreak havoc.

And, for the vast majority of human history, this havoc usually resulted in death. But then, in the first half of the twentieth century, humans learned to control bacteria through the discovery of a class of compounds called “antibiotics” (a name that means “against life,” which is convenient for the metaphor upon which this article relies). As the name suggests, antibiotics work by specifically inhibiting a process bacteria need to live, such as:

With the advent of antibiotics such as penicillin, streptomycin, and tetracycline, the threat of infection could be controlled. Surgical procedures, injuries, illnesses that weakened the immune system and opened the door for opportunistic bacterial infections (remember, bacteria are everywhere) – these were no longer the dangerous events that they once were. Just take a course of antibiotics, and that infection is gone before it even gets bad!

Treating an infection with antibiotics puts selective pressure on a population of bacteria, meaning that any bacteria that can mutate and become resistant to the antibiotic succeed and thrive while the antibiotic kills former competitors, the un-mutated bacteria. These antibiotic-resistant (AR) bacteria then replicate until the entire population is made up of AR bacteria.

Now, to be clear, AR bacteria do not arise from every infection that is treated with antibiotics. In fact, antibiotics have worked perfectly well for decades. And doctors and patients, once haunted by the possibility of death by infection, began to prescribe and request antibiotics a bit too much. A recent study published in JAMA demonstrated that 60% of patients with sore throats received prescriptions for antibiotics, even though they are needed in only about 10% of cases. And an anecdote: recently, a doctor told me that children with a largely harmless kidney condition were once automatically prescribed low doses of antibiotics for their entire lives, just to prevent any risk of infection, infections that could easily be treated with antibiotics once they cropped up.

And why is this a problem? (Besides the fact that giving a child antibiotics, or medicine of any kind, really, is traumatic for all parties involved, even if it is cherry flavored.) Because selective pressure may yield AR bacteria, antibiotics must be used prudently – only when necessary, in proper dosage, for an appropriate length of time – to minimize the generation of AR bacteria. Here are three examples of situations in which AR bacteria may arise:

So, now let’s get to the scary part of this microscopic Jurassic Park: are there AR bacteria and are they killing people? According to a report released this year by the CDC, two million Americans were infected with AR bacteria in the last year. Of these, at least 23,000 people died, with most deaths occurring in hospitals and nursing homes. The report identifies eighteen pathogens that are AR, including several that are resistant to multiple classes of antibiotics and can only be treated with the carbapenem, referred to as the “antibiotic of last resort” due to its significant toxicity. Alarmingly, increased use of this antibiotic is now causing carbapenem-resistance in already AR bacteria.

Furthermore, the 2013 CDC report was the first of its kind, a response to the fact that cases of AR bacterial infections have suddenly spiked over the last ten years. One more trip to the Jurassic Park-as-metaphor well: the dinosaurs have escaped, left the island, and embarking on a worldwide rampage.

What’s to be done? (Besides feeling terrified and depressed.)

The moral of this story, as mentioned, is that humans have a tenuous control over the natural world. However, our actions, how vigilant and wise we are moving forward, can greatly influence how successful we are in protecting ourselves. Life, our lives, can find a way. 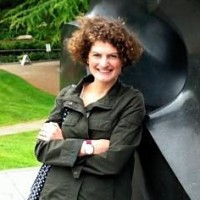 Laura Ciaccia West is the mother of an eight-month old boy, has a terrible singing voice, and fervently believes that The Sopranos is the greatest television show ever created. She will complete her doctorate in immunology in 2014.