Goodbye to All That: A Scary Short Story

There are twelve-hundred-and-fifty-seven ways to kill a woman. There are only twelve-hundred-and-one ways to kill a man. I made the lists separately and then typed them up and merged the Word documents in the Computer Lab, so those numbers are verifiable. I also sorted the tactics into categories—sneaky, particularly gruesome, ritualistic, biblical, and so on—and then I made a very large Venn diagram one night when everyone else was at Rodeo Round-up, and I looked at the overlaps. So, you know, she’s in for it.

It’s the first week of August and the fifth week of camp. She ditched me last Tuesday night on the walk to the dining hall, just sidled up beside me and looked at me and said she thinks maybe, uh, we should stop hanging out so much, or like, I should stop following her to afternoon activities everyday and/or cornering her at the Canteen, cause also she’s, uh, been hanging out with Jim a lot, and then she looked down at her feet. Now this stuff with Jim is pretty complete bullshit, because she’s at least 92% gay, according to experiments we conducted together earlier this summer.

In any case, I know it’s because she went to the grocery store in Burnet a couple of weeks ago and talked to some girls and then mostly stopped eating and lost what I’d guess to be around 8.5 pounds pretty fast and started getting to know Jim, who plays the guitar.

I learned some of this information from Ben. Ben got his septum pierced by one of the other boys last night, and his counselor obviously made him take it out, and now the hole’s all infected and unequivocally nasty. He’s started to call her All That, as in she thinks she is, and he tells me All That and Slim Jim even slow danced multiple times at the Big Thicket Dance on Saturday night. Ben reminds me again that he’d prefer to be called Benji, and I remind him again that I don’t think it’s appropriate to call him that unless he actually morphs into a fucking cartoon dog.

I decide to start with a little priming, a little wearing down. My research has shown that there are certain things I can do that are particularly psychologically effective. A commenter named SawMan297 responds to my Yahoo Answers query and tells me I should try water torture, and I consider this. But there’s no way I’m going to be able to get her alone near any source of water after the shower incident of July 17th. I’ll have to be inventive.

I try sound. I know she hates pop music, so I start to get up in the middle of the night and sneak down from my bunk and read very softly into her ear from Top 40 lyrics I’ve printed off the Internet. “We’re up all night to get lucky,” I tell her. “We’re happy, free, confused, and lonely in the best way.” I sit behind her in Arts and Crafts and when the counselor turns around, I get up close to the back of her neck and whisper, “Baby, can you breathe? I got this from Jamaica.”

I’m moved to a new cabin, and I’m discouraged. But I think of my father, at home only very late at night, and I remember the times he’s chucked his Scotch against the wall and said something only barely decipherable but of which I believe the gist was, Chrissy, you are nothing if not persistent. I feel better. Where there’s a will, there’s a way.

I think maybe I can induce cardiac arrest, so I hide down by the lake during her cabin’s camp-out and when she’s walking over to the boy’s tents, I launch what I believe to be a very realistic model of a severed hand I’ve stolen from the theater department at the back of her head. I miss by a couple of feet. She’s scared, but she doesn’t seize or grab her left arm or anything.

The night before the next day she’s signed up to go into town, I borrow a knife from the dining hall and make very thin little slits in the van tires, hopeful one’ll blow out when they get on the highway and start gaining speed. But all the tires deflate overnight, and in the morning when I get to flagpole, the trip’s canceled and the camp director’s assessing the damage.

I get a postcard from my parents—the camp has called, and they are not pleased. But I’m not worried. I know my mom just looks at the phone from where she sits on the floor most of the day and doesn’t answer it. I think of last spring when the school kept calling and I’d come home and listen to the messages first thing, and that then when I’d walk into the living room, my mom would look at me like she’d never seen me before. I heard her tell my father one night that she was sure now that there was something deeply wrong with me. I turned on my tape recorder and caught him saying, “I know.” He said, “What have I been saying? Algorithms instead of organs.” He said, “Get off the floor, Brenda.”

Ben tells me I probably need to dial it back. Forget about All That, he says. His nose is about 80% healed. He asks me to skip sports and come down to the lake with him. I tell him I can’t deprive myself of two or three hours of possible opportunity.

And then, suddenly, there it is.

She’s playing tetherball with four other girls in tiny gym shorts and when Marisa loses focus and gets smacked in the face by the ball and everyone’s bent over her on the gravel, I see All That leave alone, and I follow her from the softball field, down the hill toward the tennis courts where there’s a bathroom building. She heads into the women’s, and I slip in after her. I bend down and look under all the stall doors. All That is in the fourth stall, and her Converse are the only shoes I can see, so I push the door closed and flip the lock.

I stand over the sink and allow myself a moment to decide what exactly I’m going to do. The long window above the stalls is open slightly, and the sun’s positioned so that the bathroom’s flooded in light, which I did not expect. I raise my head to look at myself in the mirror, and when I catch my own eye, I think I see something strange—a tiny row of binary code, ones and zeros threaded together. I think, “Uh oh,” and then I realize I’ve accidentally said it out loud. All That freezes, stops unrolling the toilet paper.

I feel a bubble of air inside my chest and it feels like it’s inflating, and I think hard about this feeling and what it could mean, and that it’s possible that it’s sadness. I swallow. I wait. I put my face very close to the mirror and look into my extra-large pupils, but there’s nothing but black. 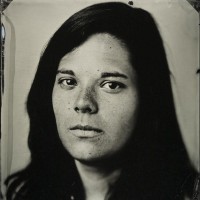 Callie Collins lives and writes in Austin, Texas. Her work has most recently appeared in The Rumpus and The Collagist, among other venues. She is the codirector of A Strange Object, a new small press based in Austin.