The Dark Thing Beside You: Night Hags and Sleep Paralysis

In The Book of Nightmares, helplessness must often appear–how terrifying to be aware and immobilized, lying entombed below ground as the earth thuds on your wooden coffin roof, unable to speak or scream. Or to live in the diving bell where the world around you is all ocean and movement, but you cannot join in: shiny slips of fish quicksilvering past as sharks bare sharp teeth jagged as bright coral reefs beside the long undulations of seaweed. Or you are a hapless passenger in the plane falling fast as white terror through the sky, gray sliding through blue like a stone thrown into a well by an implacable god making a wish, and there’s nothing you can do to stop your long descent through that blue chute of water.

Sleep paralysis, which I developed in my mid-twenties, triggers the same kind of fears–enforced stasis amidst danger. Mine first arrived on the heels of a particularly devastating breakup. I ached for my ex-boyfriend. In his absence I felt both raw and empty, as if some inexplicably cruel stranger had sliced me open, reached a hand in, and yanked out my insides. I tried to win him back and failed. He no longer loved me and there was nothing I could do to change that. The life I wanted (to wake up every morning safe in the nest of his arms, marriage, children) had disappeared; my imagined future was like a tiny blue car I watched drive over the horizon, my ex-boyfriend laughing, some other woman in the shotgun seat where I used to ride, singing along to road trip music as she rolled down the window to let the cool wind tangle her hair.

I could not fall asleep most nights until 3 or 4, the nauseous nadir of the early morning. When I woke only hours later, it was frequently to the sight of a figure standing near the foot of my bed, a blur of shadows solidified into a form. It’s hard to describe how powerless I felt, or how distant from my own body. It felt like my self, the person I really am, was a lab mouse flinging itself against the plastic box it lived in. Even my vocal cords were stone-still: I couldn’t make a sound. The presence never did anything–it didn’t move or speak. Instead, it just watched me struggle. Eventually, my eyes would blink out of focus and then back in, and the figure would dissolve into the room’s regular shadows. My body would again begin to obey my commands and I’d get up and pad barefoot to the kitchen to brew coffee as if it were any ordinary morning.

After a few months, my sorrow and insomnia were swept away by the storm of paperwork from my first teaching job and my students’ constant demands for my attention. The memory of my nocturnal visitor receded into the shadowy ocean of the past; one more thing from that time, like the weeping and all the sad letters I sent, better forgotten. For a few years I thought my stretch of sleep paralysis was an anomaly, specific only to the grief of that particular heartbreak, but then, during a desperate summer after graduate school when I couldn’t find work, the paralysis and its accompanying hallucination reappeared. This time it lasted until I secured adjunct teaching jobs for the fall and unemployment’s daily panic ended. It returned again for two months after I saw a man hit by the L train. I’d shift from warrior one to warrior two pose in yoga, and, as I moved my arms, I’d see again the way his limbs
pinwheeled when the train struck his body. When I closed my eyes at night, his face would rise up behind my lids, the look he had as his body was crushed between the train and the tracks, and how there was nothing any of us on the platform could do to help him. I barely slept, waking up panicky and immobilized, the figure standing again at the foot of my bed. This lasted until I rode the subway enough times through that same station to develop a thick layer of scar tissue over the memory of watching a stranger die.

Although terrifying, sleep paralysis poses no serious health risks. The phenomenon has been documented for centuries in folklore with tales of assorted demons and night hags, as well as in medical literature. It occurs on the edge of waking, that stage where the waves of sleep lap the shore. The sufferer’s eyes can move and automatic responses such as breath and circulation remain constant, but the muscle atonia (weakness) which prevents people from acting out their dreams renders the body temporarily paralyzed–as you wake, your dreams disperse but the atonia remains. Because it is essentially a REM sleep disturbance, those with irregular sleep patterns are more likely to experience it. This means anyone suffering from insomnia, sleep deprivation, an erratic sleep schedule, physical fatigue, or stress is at risk, as are those who overuse stimulants or are taking certain drugs used to treat ADHD or depression–that is to say, almost everyone. While some sufferers experience only the paralysis, many others undergo vivid hallucinations which tend to fall into three categories: that an ominous presence is in the room, that some thing (more on this later) has crawled on top of you, or, what seems rather pleasant in comparison, out of body experiences where you float above your motionless body.

The word nightmare originates from sleep paralysis and its accompanying hallucinations. The Anglo-Saxons believed in a ghastly nocturnal visitor known as the mare (from the Old Norse mara); a night hag who would sit on sleepers’ chests and strangle them. Belief in the mare is recorded as far back as the Ynglinga Saga (written by Icelandic poet and historian Snorri Sturluson around 1225, but based on work by the 9th century skald Þjóðólfr of Hvinir) which includes the story of Vanlande, an early Swedish king who, after marrying and impregnating a Finnish woman during his travels, reneges on his promise to return to her. After three years, his scorned wife asks a witch to either bring her husband back or, failing that, to kill him. The first spell initially works and Vanlande decides to return to Finland, but is dissuaded by his courtiers. Succumbing to drowsiness and peer pressure, Vanlande goes to bed rather than returning to his abandoned wife; by morning, the night hag has killed him.

In a few Scandinavian folktales, rather than being an active and singular entity, the mara is a possessed woman whose body wanders in her sleep and torments her neighbors. In these stories, the mara is also a victim: she wakes up exhausted and frightened, unable to account for the twigs in her hair and the strange bruises acquired in her nightly travels. If those she visits find her by daylight and chant “you are a mara” three times, she will no longer trouble them. In this way, the night hag’s victims enact a concrete version of what we all must do to free ourselves from our fears: see the terror in the light and identify it so that, once named, the dark thing loses its powers.

The helplessness and humanity of the mara in these tales is rare: generally the apparition astride your chest is there by choice and there’s nothing you can do to dislodge her. Neither science nor legend offers a cure for sleep paralysis once it manifests; instead both rely on preventative measures. Doctors recommend trying to maintain regular sleep patterns (cut back on caffeine, avoid stress, keep to a consistent bedtime), while folkloric traditions suggest more direct action. In Malta, if you sleep with a freshly sharpened knife under your pillow, the night hag will stay away. Gullah folklore, on the other hand, leans in a more domestic direction, claiming if you scatter grains of salt or seeds around your bed, the night hag will let you slumber in peace while she counts them. Other suggestions include painting your window frames and doors indigo or placing a smudge of the paint on your body: this blue, the color of the sky as time slides between day and night, is said to protect against night creatures. Only New Guinea legend offers sleep paralysis not as thing to be feared, but rather as something potentially beautiful. In this folklore, the phenomenon is caused by sacred trees that sustain themselves by siphoning humans’ spiritual essence. Because the trees are thoughtful and don’t want to disturb people’s daily lives, they nourish themselves as we dream–sleep paralysis occurs if we wake up before they have finished feeding.

I would like to believe I help a forest flourish while I sleep, but in almost every culture, sleep paralysis is attributed to something evil: the night hag, Turkish djinns, a malevolent elf (the German word for nightmare is Alptraum, “elf dream”), or the Catalan Persanta, an enormous iron-clawed beast. Or if it isn’t a demon, it’s the dead who visit us: in Mexico, sleep paralysis is called subirse el muerto (“dead person on you”) and the condition’s name in both Chinese and Korean means “ghost pressing on body.” The Japanese, however, eschew both the demonic and the dead by referring to the condition as “when you are bound or fastened tightly in metal,” as if you were trussed and dangling above the ground. Yet what resonates with me most is how sleep paralysis translates from the Vietnamese term ma de and the Mongolian khar darakh: “to be held down by a shadow” or “when the Dark presses.”

Ten years ago, I was first pressed down by the darkness. The shadows that pool in the corners of my room spun into shapes made seemingly solid by my panicked brain and my sorrow. It wasn’t only my former lover’s absence that ripped holes in my sleep, rendering it threadbare enough that the dark could slip through and stand beside my bedside; instead, it was losing my belief that the world was a place I could wander through–for the most part–unharmed that left me gutted. But, of course, the world is not safe and often we cannot make it bend to our will, no matter how hard we struggle or much we wish our lives different: in some ways, sleep paralysis is just a smaller echo of how we all live. The world has always had shadows and sometimes they take shape. Our bodies have their limitations. The dark thing will watch you or it will make a nest of your ribcage and press down on your heart and it will stay there for as long as it wants to. There’s nothing we can do when it chooses to visit us, but to breathe, keep our eyes open, and wait for morning. 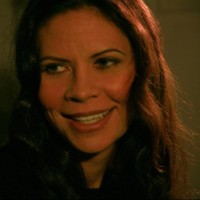 Kate Angus is a founding editor of Augury Books. She has received the A Room of Her Own Foundation’s Orlando prize for Creative Nonfiction, Southeastern Review’s Narrative Nonfiction award, and residencies at the Betsy Hotel’s Writer’s Room in South Beach, the Wildfjords trail in Westfjords, Iceland, and the BAU Institute in Otranto, Italy. Her work has appeared in Indiana Review, Subtropics, Court Green, Verse Daily, The Awl, The Rumpus, Best New Poets 2010 and Best New Poets 2014. A former Writer in Residence at Interlochen Arts Academy, she currently lives in New York.