On Not Having Sex: The Accidental Blue-Ballser

The very first time, I used the worst excuse. I won’t say “the worst excuse in the book,” because that transgression in clichés would be very nearly as bad as my telling John, “I have to go to the bathroom,” somewhere between my bra falling to the ground and the faux-innocent trailing of hands along waistbands.

If there’s one thing I’ve learned, it’s that the lightest of touches are the least accidental.

What I should have done was take a minute in the co-ed bathroom of the freshman dorm, returned to John’s room, and told him I wasn’t feeling well, I was too drunk, goodnight. Which would still have been a terrible excuse, but at least my having uttered such a flimsy excuse might have at least given him a hint.

I lied. There’s a second thing I’ve learned. It’s not, as many women speculate, that most men can’t take hints: it’s that most men prefer to interpret hints as red herrings.

I should at least have just gone back to my room, turned off the light, and gone to bed. Then he might have simply assumed what I might have told him about not feeling well – or, better, assumed I was even more drunk than I really was and had no idea what I was doing, or that it was rude. College: the four years of your life where alcohol absolves you of everything.

What I should not have done was return to the gathering in the lounge on the third floor and allow him to find me there, and smile at him across the crowded room and say, “Hey, you’re back! Good to see you!”, delighted, surprised, and lying.

Things I have learned that do not mean what I was taught that they meant in traditional English, particularly when preceded by, “Do you want to come back to my place and”:

Maybe they know I’m a runner, so the goal is to transfix me with obscurity and gore rather than gorgeousness and then make a move.

They probably do not realize, however, that there is a particular brand of girl that has not yet had sex and does not yet want to. Not because she’s saving herself, or is against sex generally, but because her mother prefaced the sex talk to her daughter’s eight-year-old self by saying, “Your father and I decided to have sex only once we were in love, we were very comfortable with each other and respected each other very much, and we had both tested negative for AIDS.”

I’ve never been a prude, and I’ve never been afraid of sex, or anything nestled in bed alongside it. But I am attached to my comfort. When someone opens a window in a room, I am the first to feel the draft, and the first to complain if it’s too cold. I will probably leave the conversation along with the room if the window is not promptly shut. If I am hungry, and we are at the table, and food is forthcoming, I will not hear anything that is said until my stomach is satisfied enough to release its vise grip on my ears.

My only prerequisite for having sex, before I’d ever had it, was a certain level of comfort with the person I was to have sex with.

Funny how you can suddenly feel uncomfortable with anyone when your clothes are off.

I would apologize to Michael if I ever had the chance. A mutual friend of both of ours told me how, months later, he was till confused about “what happened.”

I’ll tell you “what happened.” What happened was that we were talking about British television and film, finding mutual interests, undoubtedly imagining them to be more unique than they really were for the sake of connection. (You, reader, have undoubtedly seen either the British Office, Doctor Who, Black Books, or at least Mr. Bean. See, and I’m not trying to sleep with all of you.)

What happened was that all was going as promised – he set up the movie, we propped ourselves up on his bed, he started the movie – when, two minutes into the opening titles, he said, “We’re not watching this, are we,” and closed the computer.

What happened was that I had been watching it, because I had been trying to see Hot Fuzz for about a year, ever since Anna had recommended it to me. Well, fuck you, Anna, that was a terrible recommendation, one that got me stuck facing either a fumbling undesirable sexual encounter or frostbitten toes on the long walk home.

What happened that night was that I very nearly lost my toes.

I saw it coming with Liam, and I wasn’t entirely unwilling. Undecided, as always, but considering.

I was a little excited, and a little nervous. Liam was a handsome guy. He was a tall guy. A very tall guy.

Finally there was nothing left between us but my hand and him. I felt like I was holding the gearshift of something I still wasn’t quite sure I was actually going to ignite and drive.

It wasn’t necessarily a problem, it was something of a surprise how much smaller the car was than I’d anticipated.

Suddenly, I was completely decided and no longer nervous in the least. I told him, sorry, I wished we could, wished we would – but I had to get up really early in the morning.

That much was actually true, and he knew it. But I wished I’d been lying, and I wished he knew that, too.

I’ve tried to be nice about it. I’ve tried my best to let people down easy. When I turn down a kiss I offer a hug. When he worries it’s him, I say, No, it’s not you, it’s just me and the fact that I really, really don’t want to have sex with you.

However, when that moment rolled around, I felt I had to say something.

“Just so you know,” I noted, “I haven’t actually done this before.”

Jeff’s reaction was, at first, hesitant, but unfazed.

“Okay.” But he stopped. “I don’t know, it seems like – is this really the way you want to do it, for the first time?”

I told him yes, it didn’t matter; I hadn’t been waiting for anything in particular – I just happened to have not had sex yet. Just happened not to have, as though not having sex simply requires a passive allowance of life’s natural processes to occur.

And yet the more I insisted I wanted to, the more he balked. Not only over the course of the rest of the night, but for four more months. We continued to see each other, and we kept coming awfully close – but it seemed as though the longer we saw each other, and the closer we got, the more reason he saw not to.

This backward logic had things feeling altogether backwards, and roles reversed. I considered telling him to grow a pair, but I didn’t. I more seriously considered offering to lend him mine.

But I didn’t. And we didn’t – until the very last night we spent together before winter break. He was leaving for home the following morning, and I was to go abroad the following semester. We wouldn’t see each other for a long time. Plenty of people start relationships with sex: it seemed as apt a way to definitively end one.

The next morning, he left. I had a couple more days on campus. In order to distract myself from what I knew would be a rather melancholic day, the morning Jeff left, I had accepted a brunch date with Sam. At brunch, I accepted Sam’s invitation to go dancing that evening.

I met him in his room, and he taught me a few steps before we headed to the dance space. I opted to ignore the inherent intimacy of being in his room, dancing close to no music at all. We headed to the dance, and we had a good time. We danced together for a while, and then while he danced with other ladies of more appropriate deftness for his skill, I attempted to dance with other partners, gave up, and went to the bathroom. (Really.)

On the way back, though, I caught a glimpse of a TV screen in a lounge in the building: White Christmas was on. It was delightfully, refreshingly sexy in that kind of Bing-Crosby-treating-women-very-appropriately-onscreen-and-everyone-falling-neatly-and-politely-in-love kind of way. Sexy with no sex involved at all.

Sam found me upstairs an hour later, tearing up with a freshman who was letting me share his popcorn because I’d started reaching into the bag for it and he seemed too polite to say no.

Sam asked if I wanted to go back downstairs and dance the last dance with him. I said no, thanks, it’d been fun, but I was tired and I had to go to the bathroom and I also had to get up really early and, frankly, I didn’t owe him anything, and he wasn’t even a very good lead anyway. Then I left.

I didn’t actually say any of that, except the “No, thanks, I’m tired” part. He graciously walked me home and only asked once more, at my door, if I was sure I didn’t want to come up to his room and have some wine and maybe watch a movie.

I’d have liked some wine, and I might even have had the stamina for another movie. But I said no, thank you, again, and goodnight.

It’s a relief to turn something down when you know what it is you’ll be missing. 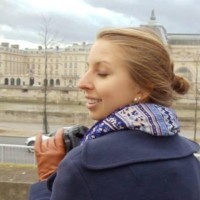 M.B. Guinn is a writer, editor, teacher-in-the-making at Columbia Teachers College, and sporadic chef living in New York City. Her work has previously appeared in The Equals Record and in various bowls and plates nationwide.