It’s 1954, and a woman sits alone in front of a typewriter in a Brooklyn boarding house. There’s a half-finished bottle of cheap red wine next to her, and the only other furniture in the room is an unmade bed with dirty sheets. It’s the land lady’s responsibility to provide clean sheets, but it’s the woman’s responsibility to pay the rent on time, so she chooses her battles carefully. She’s surrounded by books stolen from libraries across the city (the only moral way to get books, she believes.) She takes a swig of wine before she leans forward to type.

Someone I could kiss
Has left his, her
tracks
A memory
Heavy as winter breathing
in the snow

This is Elise Nada Cowen. Today she is most famous for being Alan Ginsberg’s experiment in heterosexuality, and the typist of his poem “Kaddish.” Beat scholars place her as the footnote in the Legend of Ginsberg: a devoted follower of the poet who lived in his intellectual shadow. Others have written her as a tragic-women-poet figure (she suffered from mental illness most of her life, and committed suicide at the age of 27.) But there is more to her story than that. Her surviving poetry shows a unique perspective on the rigid cultural conformity of the 1950s and also the fringe artistic community of the Beat Generation.

I took the heads of corpses
to do my reading by
I found my name on every page
and every word a lie.

While their politics and art were radical and dangerous for their time, the Beat Generation’s views toward women were not that much different than those of the man in the grey flannel suit they rebelled against. Women played an important role in the Beat community, as girlfriends and lovers but also as vital supporters of the artists- they took jobs to put food on the table, cooked, cleaned, typed and otherwise made it possible for the men to create. But only a few women were recognized as artists, and most were not deemed to possess the talent or creative soul required to produce art.

Joyce Johnson (novelist, memoirist, Jack Kerouac’s ex) gives a compelling example of this in her memoir of the Beat Generation–aptly titled Minor Characters—describing women’s role in the Beat story. She describes being part of a creative writing class at Barnard, where their professor dashed the dreams of his all-female class by telling the students that if they really wanted to write: ‘you wouldn’t be enrolled in this class.  You couldn’t even be enrolled in school.  You’d be hopping freight trains, riding through America’. Most women today would find the idea of hopping freight trains across the country pretty absurd- in the early 1950s, it was unthinkable. But it was another way that women were excluded from creating: they couldn’t possibly have experiences worth writing about if they just stayed at home where they belonged.

Sitting with you in the kitchen
Talking of anything
Drinking tea
I love you
“The” is a beautiful, regal, perfect word
Oh I wish you body here
With or without bearded poems

Gregory Corso gives one reason why there are so few women associated with the Beat Generation today: “There were women, they were there… their families put them in institutions, they were given electric shock. In the ‘50s if you were male you could be a rebel, but if you were female your families had you locked up.” Elise Cowen spent much of her adulthood in and out of institutions, suffering from depression and psychosis. Johnson, one of Elise’s close friends, writes, “I’ve often thought Elise was born too soon.  In a time with more tolerance for nonconformist behavior in women she might even have survived.  Elise could never conceal what she was.  She could never put on a mask as I did and pass in and out of the straight world.”

Death I’m coming
Wait for me
I know you’ll be
at the subway station
loaded with galoshes, raincoat, umbrella, babushka
And your single simple answer
to every meaning
incorruptible institution

Elise Cowen first got involved with the Beats as a student at Barnard, where she was living out her parents’ dream for her to get an outstanding education at a prestigious institution. Her family was the only Jewish one in her Long Island suburb, and her parents desperately wanted the same middle class respectability that the white families in the neighborhood were granted without question. Elise often did not live up to their expectations, and this was the source of much conflict in the Cowen house. She was very intelligent and well-read, but she got terrible grades. At Barnard she met Joyce Johnson, Leo Skir, and other countercultural artists, intellectuals and Columbia students who would form the core of the East Coast Beats. Her friends called her Ellipse, or sometimes Eclipse. Her middle name was Nada, and she shared this proudly. “Elise Nada Cowen- Nothing and Nothingness.” She read a lot, wrote in secret, and rarely went to class.

The aroma of Mr. Rochesters cigars
among the flowers
Bursting through
I am trying to choke you
Delicate thought
Posed
Frankenstein of delicate grace
posed by my fear
And you
Graciously
Take me by the throat

Her relationships with men were troubled. She started sleeping with one of her professors at Barnard, serving not only as a lover but also housekeeper, cook, and nanny for his two children. She did this because she believed in his work, in his genius. She repeated a similar pattern with Allen Ginsberg. Once she got involved with him, “her world was Allen.” Anything that Allen did, from his religious philosophy to his choice in coffee, Elise also adopted. But Cowen’s poems and her interactions with Allen suggest that this was not all mindless imitation. After she finished typing “Kaddish,” Allen remembers that after completing the poem she had observed, “You still haven’t finished with your mother.” She discovered Buddhism and Jewish mysticism through Allen, her poems filter these ideas through her own experience and perspective, often finding the sacred in the body, the mundane, and even the macabre. The figure of Death waits at the edge of the platform, possessing “moving human perfection,” waiting for no one. “Dear God of the bent trees of Fifth Avenue” she intones at the beginning of a poem addressed to a sacred lover. She yearns: “To glory you in/ breast, hair, fingers/ whole city of body.”

Then
For Roselle?
For me?
A confusion of tears over the Royal typewriter
Nutritious Roselle

As her mental health deteriorated, surviving in the “straight world” became even more difficult for Elise. She had trouble keeping a job, which only increased as her depression and drinking became more severe. For a while, she worked typing scripts for a television station, but she was fired and had to be forcibly removed from the office. She insisted it was because the station never informed her why she was being dismissed. At any rate, the policemen who carried her out had broken her glasses and punched her in the stomach. Her father made her swear never to tell her mother about the incident. By this time she was living at her parents’ house after a stay in Bellevue, and she was becoming increasingly paranoid.

After her death, Cowen’s family destroyed much of her poetry and writings, describing them as “filthy.” Her poems cover much of the same topics as the male Beats- spirituality, homosexuality, drug use and madness, among many other things. However, as a woman (and a queer one at that) she was too far on the margins even for the Beats. Johnson writes: “I’d show her the stories I was writing, but [Elise would] never show me her poems.  ‘I’m mediocre,’ she told me, pronouncing the word in an odd hollow French way.” When her poetry was published, it was largely due to the efforts of her friends, especially Leo Skir, after her death. The first collection of her poems will be published this year.

The second eye is ripped open by an
apothecary & propped with toothpicks,
systems & words
and likes to blink in mirrors

The first eye is blind
there is no other

Quotes from Joyce Johnson are from her memoir Minor Characters or her essay “Beat Queens: Women in Flux” for the Rolling Stone Book of the Beats.

Biographical information and some of the poems are from “Elise Cowen: Beat Alice” from Women of the Beat Generation edited by Brenda Knight.

Information on the new collection of Cowen’s poems edited by Tony Trigilio can be found here.

All poems in this piece are by Elise Cowen. 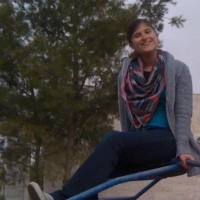 Megan Keeling lives in Washington D.C. She is currently recruiting for her girl gang.