Previously in Femslash Friday: The Facts of Life.

Tomb Raider 2013 may very well be the Toastiest video game ever created. Truly, if the developers had set out to make a game specifically intended to appeal to regular readers of this website, they could have hardly been more successful. Newly made-under Lara Croft is a recently graduated archaeologist: studious, serious, and hungry to prove herself in her field. Throughout the game, she remains endearingly—if somewhat alarmingly, in the middle of firefights—enthusiastic about the smallest historical find.

Though her own father is deceased, Lara has not one, but TWO adorable, accented substitute Adventure Dads along on her first quest to endlessly assure her of her own capability (when they’re not providing sniper fire or sacrificing themselves on behalf of her safety). Effortlessly scrambling up craggy mountainsides and sliding down improbably long zip lines supported merely by the strength of her own arms, Lara serves as incredible inspiration for Feel the Burn. When Lara dies graphically upon failing a quicktime event, it’s disturbing, but also fascinating in a horrible-deaths-in-national-parks kind of way, and she spends a not-insignificant amount of time wading around in caverns full of blood and human viscera, like she accidentally wandered into The Descent. The game is, at its core, a delightful, over-the-top misandrist fantasy. Playing as Lara, you brutally slaughter your way through an entire island of men who attempt to prevent you from reaching your goals. It’s quite cathartic. When forced to kill a deer in order to survive, Lara winces and says “sorry” to its corpse before gutting it, but when a maimed enemy pitifully begs her to end his pain? She punctuates blowing his brains out with an ice-cold, “Go to hell.” In short, this game is amazing and if the idea of annihilating hordes of angry male detractors with napalm arrows appeals to you, you should play it.

And that’s not even the best part.

In this beautiful, glorious masterpiece of a game, Lara Croft is SO GAY. And not in a gross, trying to titillate perpetually adolescent gamer boys way. It’s just immediately apparent that Lara and her best friend, Samantha Nishimura, are involved in a loving, respectful, soon-to-be-doin’-it-with-each-other relationship. Following an introductory shipwreck and a few narrow escapes from violent death, the game opens with a cutscene that shows Sam joking around to ease Lara’s tension over her first professional archaeological expedition. After calling her “sweetie,” (do you call your platonic friends “sweetie”? I don’t call my platonic friends “sweetie”) Sam assures Lara of her strength and capability. All of their interactions prior to Sam’s abduction at the hands of weirdo white guy video game religious cultists offer a glimpse into a well-established, healthy relationship between the two. They met, apparently, in boarding school (boarding school!!), after Sam got sent there in an attempt to curb her wild child tendencies. Check this description of their background from the Tomb Raider Wiki:

Lara and Sam became great friends, strengthening each other’s weaknesses. Sam and Lara grew closer over the years and when it became time to choose a college to go attend, they both decided to attend UCL. As Sam and Lara’s education at UCL was coming to a close, they had an insatiable desire to go on an adventure.

Can you just imagine? The mutual admiration, the shared intimacy, Sam going on dates with dudes and complaining about them, slowly realizing that she just never feels right with anyone else the way she does with Lara. The way Lara’s shoulders look in her tank top, the way strands of hair slip from Lara’s ponytail to fall around her face, and Sam finds herself reaching out to push Lara’s hair behind her ear and lets her hand linger just a little too long on Lara’s cheek… INSATIABLE DESIRE. ADVENTURE. TOGETHER. *swoons*

And they are so hot. I mean, Lara Croft, duh. Her (relatively) practical pants and climbing boots are three thousand times more appealing than the booty shorts of yore, and Sam, the daughter of a Portuguese model and Japanese media mogul—oooof. Shaggy brunette bob, perfect pouty smirk, and wears the hell out of this fitted three-quarter sleeve leather biker jacket, which I don’t think would be possible for a real live human being to pull off. I envy Lara her ludicrously supportive sports bra, and the woman just seems to get more and more attractive the sweatier and bloodier she gets. Would that I looked that good after walking my dogs around the block, much less post-caving and climbing and diving and fighting and blowing up inconvenient chunks of landscape.

Upon first finding herself marooned on an island full of murderous cult-bros, Lara is willing—albeit somewhat reluctant—to do what it takes to survive. After she realizes that her antagonists plan to use Sam for some sort of sacrificial ritual, however, and gets a little practice at man-slaying under her belt, her demeanor is transformed. Within a few hours on the island, she’s screaming, “Run, you bastards! I’m coming for you all!” as, armed with a grenade launcher, she takes her revenge on a fortress full of Sam’s captors.

Once Lara and Sam are reunited, they can’t keep their hands off of each other—hugging, holding hands, touching constantly. Putting aside any distress she may feel in the wake of being kidnapped and subjected to a terrifying “fire ritual,” Sam is a stalwart rock of support for Lara, who, once reunited with Sam, allows herself to be vulnerable again. Sam defends Lara from criticism (from Reyes, who I mention here just to note that she is inarguably the hottest character in the game and comforts Lara as she struggles with loss. Lara is physically the stronger and more resilient of the two, but in the quiet moments, in the aftermath of adrenaline, Sam holds Lara up with her unflagging strength of spirit.

Nothing gold can stay, however, and eventually Sam is re-kidnapped by Lara’s ambitious and desperate former professor (how’s THAT for a horrible professor story?) in an attempt to generate mystical cult happenings and bolster his career at Sam’s expense, at which point Lara (voiced by me, from the comfort of my couch), screeched, “OH, YOU FUCKERS HAVE GONE AND DONE IT NOW,” and racked a round into her shotgun.

I’m getting ahead of myself, however—between the two Sam abductions, there’s a tragic little beat where, facing certain death, cute li’l crew member Alex confesses his unrequited affection and admiration for Lara. Taken aback, but aware that he’s doomed, Lara gives him a kiss on the cheek before making off with an awesome new piece of gear. Replaying the game with a mind to writing this piece, I may or may not have cackled inappropriately at this scene, thinking that he was lucky to get a sad little platonic pity kiss instead of a chuck on the arm before she left him to his fate. Poor dudes in this game, they really do not fare well, even the good ones.

Anyway, in order to win Sam back a second time and allow hot-ass Reyes to safely escape the island and reunite with her daughter, Lara ascends to a previously undreamed-of level of badassery. With weapon upgrades maxed out and every last skill point allotted, she busts up into the sacred Sun Queen soul transfer ceremony and just wrecks the joint, laying waste to cultists and ancient spirit-demons indiscriminately. Taking up her trademark two pistols for the first time, she guns the main antagonist right off of a cliff before staking the corpse that’s trying to possess her girl. Threaten Sam on Lara’s watch, and you face death, my friend. Gross Professor Man is lucky one of the demon warriors got to him first; his end would have been much uglier if Lara, directed by me, had gotten a chance to confront him personally.

Sam is the fire who drives Lara to take a break from her books and seek real-world experiences. Sam is the one who encourages Lara when others would naysay her because of her youth. Sam is the driving force behind the entire Lara Croft origin story: Lara will take risks on behalf of Sam that she might never be bold enough to attempt otherwise. Lara will go to any length to see Sam safe and back by her side. Without Sam, Lara would never have become the beautiful, magnificent arrow-shooting cliff-jumping axe-fighting gentleman of a lady she is today.

At the game’s end, after Lara destroys the evil force that would have stolen her girlfriend away and takes Sam, now kitted out in a lovely white dress, into her arms, I fully expected them to kiss passionately. Instead, they had a sweet little verbal exchange, the light of the sun broke through the clouds to bless their reunion, and then Lara carried Sam down the mountainside (dreamy!) to deliver her to safety.

But surely, after Sam had some time to recover, I would get to see them make out, right? Wrong. Instead, we’re treated to a scene where some random sailor man barges in on Lara’s reflections to chatter at her and tell her they’ll be home soon. As she says to herself, “I’m not going home,” badass music plays and the camera pans away, leaving Lara and Sam’s obvious attraction unconsummated.

But I’m going to fix that right now, friends. Here’s what really happened after that:

Lara stood gazing out over the water, her thoughts disturbed by the unwanted interruption. Her irritation faded as quiet footfalls approached from behind—she knew that step.

“Sam,” Lara said by way of greeting. Her voice was warm.

“Lara,” Sam returned, smiling up at her. They gazed at one another for a long moment, overwhelmed by the enormity of what they’d experienced together, by the things as yet unspoken between them. Sam took a step closer. “Lara, I haven’t really gotten a chance to thank you for saving me.”

“There’s no need to thank me. I was scared, sometimes, but not for myself. I couldn’t…” Lara’s voice broke; she looked away. A gentle touch on her arm warmed her. “I couldn’t lose you,” she whispered, looking back into Sam’s eyes.

“You didn’t lose me,” Sam replied, quiet but self-assured, “and you won’t.” She took a step closer, closing the short distance between their bodies. Standing on tiptoe, she took Lara’s face gently between her hands and pressed soft lips to Lara’s. Startled into an instant of immobility, Lara swiftly melted under Sam’s touch. The pain of her injuries disappeared with the scent of Sam’s hair. Lips parted, she returned the kiss with interest, pulling Sam close.

When Sam eventually pulled away, Lara was reluctant to release her. Sam must have felt the same way; she wrapped her arms around Lara’s neck and tilted her head back to look up into her face. “I know you, Lara Croft,” she said in the intimate tone Lara loved, “I know you aren’t going home. Not after this. You have so much to explore, so many answers to find. But, in the meantime…” Sam’s eyes sparkled, her smile became mischievous. Lara would fight any number of armed men for that smile. “It’s a long trip,” she finished suggestively.

A slow smile spread across Lara’s face. “I did promise that I would get you safely home.” Stooping, she scooped Sam up into her arms and strode across the deck, aching muscles forgotten as she carried a welcome burden. It was a very long trip back, indeed, and Lara and Sam, once again, were sharing a bunk. 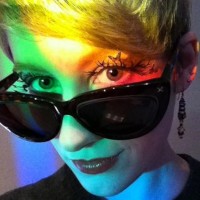