“The hotels are always full here,” Mike tells me on a slow Tuesday night at Babe’s sports bar. He’s come for the hockey, a lone Bruins fan in a desert of pump jacks and roughnecks. Mike moved to this oil and natural gas boomtown in New Mexico from the northeast nine months earlier. He’s a chemical engineer for an oil company you’ve probably heard of, and he’s got stories about the hotel he lived in before finding an apartment. I ply him with bourbon, doing my archetypal duty as bartender-confessor, and his tongue gets loose. “Girls go door to door, did you know that?”

“Girls, you know, working girls, they go to the hotels.” Mike lived in a hotel for six months because housing can be hard to come by in a town built for 25,000 but currently housing 50,000. Apartment complexes can’t be constructed quickly enough with most skilled workers flocking to the oil fields for fast and dangerous money, and investors are wary to sink money into apartments that may be empty when the oil stops flowing. Some say it’ll be 5 years from now, some 15, but everyone knows it will stop.

“You mean sex workers?” I ask him, using my Bay Area sex-positive lingo.

“Yeah, hookers,” he says, shrugging in his suit and tie like he’s trying to get away with correcting my grammar.

“They come knocking at your door, do they?” I raise my eyebrow, wondering where this confession might lead.

“Yeah, so I’ve heard. It’s never happened to me,” Mike backpedals, his eyes wander up to the TV screen where young men on skates are running each other down.

I drive 20 minutes back to my apartment after close, pocket full of tips, and start my second shift. I sign on to my phone sex account and wait for calls to come in. It’s a busy night, men in cities far away from me are hiding from their girlfriends and wives, or nursing bruised egos, with the phone in their hand. I use the upper and lower ranges of my voice, the edges of what I sounded like as a teenager up high, to what their fantasy of a dominatrix might sound like down low, to coax orgasms out of their fantasies. For five hours I make better money than I do on my feet all night at the bar. There are a lot of men out there who need to talk.

I moved to this remote desert town in the summer, a displaced San Francisco early thirty-something, run down after a hard-lived nine years in a hedonistic city. A friend of mine came here first to do research for a biofuel company. One night on the phone, after too many whiskeys, and exhausted from survival in an area whose price of living continued to sky rocket, my friend told me, “Come here, take a break, it’s quiet.” I needed a change. Every block of San Francisco felt haunted. Exes lurked in coffee shops, memories of an ill-advised two-year run with heroin, muscle relaxers, and a string of broken men careened toward me from Mission Street to Divisadero. Perhaps more painfully, I was constantly reminded of the wistful pre-recession, and pre-most recent tech boom years, when my life was full of brainy misfits and sexual adventures. I missed the twenty-five year old, the one who happily slept with men twice her age for money, and who loved her friends with the kind of abandon that comes easily in your twenties. But I was too tired to get her back, so I loaded a rented SUV with the remains of my life, and made my way into the desert.

I heard about the hotel girls before Mike told me about them. From North Dakota to Texas, in small towns where men leave whole lives behind to temporarily work extracting resources from the underground ocean of oil and natural gas in the interior of the American West, rumors of working girls are never far behind. Not much different than the western novel trope of the bar girl who has sex for money with cowboys and men passing through town in the hotel upstairs, it is hard to gauge the veracity of these tales. Are oil town hotel girls real, or a product of the eastern imagination about the Wild West?  When I relay Mike’s story to my friend who sweetly lets me live with her, and who knows my history as a part-time sex worker, she jokes with me that I should give it a try. I could knock on doors, offering my services to roughneck after roughneck, and from the tanned and broad shouldered look of many of them, the gig doesn’t seem half bad. Sometimes when I drive home from Babe’s, between bartending and phone sex, I see the Best Western and think about stopping, but I never do.

A few months later I get a call from a good friend in New York, a strikingly beautiful pro-domme named Sara with a string of loyal clients. Sara and I were roommates in college who both found our way into the sex industry. One of her longtime regulars wants a two day sex bender that includes both her and a kinky girl who runs on the more submissive side. Sara thought of me, excited over the thought of spending a few days together, a small luxury since our college days sharing rundown apartments.

Two weeks later, Sara and I are in a hotel suite in SoHo with her client. He and I hug to greet each other and Sara asks me to pour us all wine. Wine leads to laughter, which leads to what we are all there for. Twenty-four hours later I wake from a nap in the master bed, grey light reflecting off the soft sheets. I am slightly buzzed from vodka, dolled up in a black corset and thigh-his, and my eye makeup is shot from crying during an S/M session. My body feels saturated from head to toe, skin almost humming from touch. I feel alive again.

When I return to New Mexico Sara sends me a stream of pictures of the weekend. They are beautifully composed shots of rumpled sheets, half empty liquor bottles, a black and white of she and I locked in a kiss with her hand pulling my ponytail, making my knees buckle slightly. In one shot her client is laying on top of me, his slight body bends back towards her as he licks my nipple and she raises a paddle behind him. My smile as I look down, hand in his hair, is unmistakable. I flip through the pictures and wonder what keeps me from reliving these scenes in a town with rumors of working girls?  On the way home from Babe’s that night I pass a string of hotels and some fantasy version of myself stops and has sex with roughnecks and oil businessmen. My real self goes home and signs onto my phone sex account.

It’s been nine months in this desert boomtown, sixty miles away from anything, and I haven’t been able to confirm the existence of hotel girls. It’s not for lack of trying. I’ve led so many patrons up to the edge of admitting that they’d paid for sex while away from their families that my boss noticed and plead with me to stop broaching the subject. I took an ad out on the local Craigslist to see if anyone would be willing to talk to me about it. I received only messages from horny men in response. I’ve had joking conversations about sex work with pretty women to discern whether or not they might open up. Nothing. I’ve reconciled myself to the idea that the hotel girl is a fantasy borne of western novels and the human sexual imagination. Sex work happens everywhere, and there is no doubt it is happening here, but in some other form. Lap dances at the strip club lead to more intimate relating, sex workers pick up clients at restaurants and bars, oil tycoons fly in their preferred escorts from larger cities, or take on local sugar babies and put them up in condos. While I was obsessing over whether or not girls were knocking on anonymous hotel doors, a smart working girl was probably closing a deal as I served her client a Scotch. Like Sara and I hauling S/M gear up to the twentieth floor of a New York City hotel, these things aren’t difficult to spot if you know that what you are looking for doesn’t come flanked by romance or mystery. It’s more likely two women laughing at a private joke, and one man knowing he would pay to hear more. 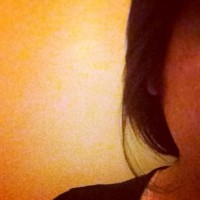 Violet is a sex worker and writer living in the Southwest.