A Camping Trip With My Dad

This post is brought to you by A Man.

My dad only gets me into the car by promising a trip to Barnes and Noble. I might be 9, but I’m well versed in the art of manipulation and guilt tripping, and as the non-custodial parent my dad is particularly susceptible. All in all, it’s probably a good thing that my tastes run cheap, although he sighs when he sees I’m clutching a copy of the first volume of Runaways, in which a group of teenagers discover that their parents are actually evil supervillains and run away rather than become complicit in their actions. I can sympathize.

This book becomes important to me in two very different ways.

1) It’s the first comic book I ever read and enjoy; later on, I will discover Tintin and Sandman and Spider-Man and Wonder Woman, but Runaways remains the first and best beloved.

2) This three-day camping trip to the Grand Canyon will last ten days.

Despite the bribe, I refuse to talk to my dad. I spend the first three hours of the road trip alternating between sleeping and reading. It doesn’t bother him. He pulls over at a grocery store for supplies and emerges with enough ramen to feed us for three days and—more importantly to my eyes—a 1-lb hunk of Gouda. After having been tossed out of bed at 5 AM and unceremoniously informed that I will not be attending my friend’s birthday party like I planned, I am ready to drown my feelings in dairy. We split the cheese and eat it in the back of his pickup truck and I feel almost happy about this weekend.

Our total supplies include: a camp stove, a pup tent, one change of underwear each, one of those weird water bottle backpack hybrids, a video camera, and a lot of Nesquilk chocolate milk mix. After driving for several more hours, we stop off at a store to purchase hiking sticks. We buy hats. We buy real hiking boots for me. This is starting to feel more like fun and less like torture. I cheer up and insist on carrying all my gear, including the hiking stick and water bottle backpack, into the souvenir shop. In a room full of tourists, I am the biggest tourist of them all.

(Notably: the souvenir shop contains postcards depicting naked women. With a kid’s razor-sharp instincts, I home in on them instantly and show them to my dad.) We arrive at the Grand Canyon. A white man in his 30s tells me about his journey to eat rare and exotic meats, including alligator, horse, and who knows what else. I tried pork for the first time last weekend and tell him so. He decides to find a worldlier conversation partner.

My dad tells me we’ll spend the first day hiking down to the Indian Garden Campground, spend the next day enjoying nature, and then hike back up on the third day. This doesn’t seem horrible, though I’m suspicious. This isn’t the first time I’ve gone camping with my dad, and every single time, the trips last longer than he says they will. Still, it can’t be too bad.

I learn a lot of things during that hike.

1) Dead squirrels are everywhere and never stop being disgusting.

By hour two, I am lagging almost twenty yards behind my dad and carrying nothing but the water. I have to pee but there are no bathrooms in this area, so my dad tells me to go around the corner. I burst into tears and sit down. I haven’t eaten anything all day except the Gouda, which made a return appearance about an hour ago because I’m lactose intolerant (a fact no one will pick up on for several years).

The dead squirrels are depressing me, I’m sunburned everywhere because my dad didn’t pack any sunscreen, I’m dirtier than I’ve ever been before in my life, and I never wanted to go on this trip anyway. I’m missing an indoor ice-skating party for this bullshit?

We take a break and I read more Runaways. Nico Minoru, teenage Goth turned witch, discovers how to summon her magical staff and punches her parents in the face. I love her so much it almost physically hurts, though that might be the dehydration. My dad notices and makes me drink chocolate milk powder mixed with water, a concoction I loudly announce “looks like liquid poop.” I will insist on referring to it by this name for the rest of the trip.

One thing my dad learns about me: I am mortally afraid of heights. The Grand Canyons is nothing but heights. My phobia doesn’t kick in until about mile two, at which point I start bawling about how I’m going to die. My dad pulls out his video camera, which I can’t fault him for. Perhaps as a coping mechanism for being saddled with me, he usually finds my histrionics hilarious rather than irritating.

When we arrive at the campground, we set up camp and my dad cooks ramen with the camp stove, which I devour. I fall asleep rereading the first issue of Runaways by flashlight, trying to drown out the sound of my dad’s snoring, which is still the worst noise I’ve ever heard. I console myself with the thought that this nightmare will be over in two days.

It is not. On day three, I wake up ready to pack up camp and leave. My dad discovers that he cannot face my whining and complaining so soon, and puts off packing until it’s too late to make the trip back.

I am appalled. I have no more clean underwear, we only have three more packets of ramen left, what are we going to do? I fret and worry and read more of my comic book. My histrionics are considerably less amusing at this point and, in an effort to shut me up, my dad takes me to see the Colorado River. This is possibly the only time I enjoy the trip, although it’s marred by how I end up using that time to wash my underwear, grimly certain that my dad has kidnapped me and we’re going to live here forever like barbarians. Can I make it back up by myself? Maybe I can find a quarter and get to a payphone so that my mom can rescue me from this hellhole.

I touch a fish and scream, and my dad pretends he doesn’t know me.

As we walk back to the campsite, I notice my dad has caught some fish. He has no fishing equipment, but he does have a childhood spent in rural Korea where he and his siblings ran amuck in the countryside, so I guess he has some tricks up his sleeve. I am even more convinced that I have been kidnapped—why else would he be hunting for food rather than taking me home? Will I ever see my friends again?

I bet my friend had really cool goodie bags at her party and now I’ll never know. Unaware of the dark turn of my thoughts, my dad shows me how to gut the fish and makes me do one by myself. For once I don’t cry, but I gain a lifelong aversion to seafood.

We pass a lot of days like this. We hike deeper into the Grand Canyon and I start getting used to it. Also, I realize that I’m missing school, a thought that cheers me up enormously. I worry about what my mom is thinking right now, but not overly so. Being kidnapped is kind of fun, even if I haven’t eaten anything except watery chocolate milk and fish for a few days. I pretend to be Laura Ingalls and decide to make the best of it, even though I’m pretty sure Laura had more than one book to read. My dad unearths some beef jerky and teaches me about edible plants, and I make some attempts at fishing. The giant vats of mule piss on the trails remain entertaining. I start viewing other hikers with superiority; they’re just tourists, but I live here. (This attitude would reappear when I moved to New York, demonstrating that we never change as much as we think we do.)

One morning, I wake up early. The air is cool and gray, and the trees and bushes are so green and lush that they don’t look quite real. Everything is beautiful, in a John Muir sort of way. I pump some water out of the communal spout and wash my underwear in it, and when I look up a deer is approaching me.

We both freeze. The deer’s soft, wet eyes regard me as I stand there clutching my threadbare underwear in one hand, my fingers red with cold. I’ve never been this close to a deer before. This is the kind of moment that can’t be framed in words, when the world holds its breath and everything slows down so you can look—really look—and see how it shines. The deer looks like Bambi’s mom.

I think: If I have to eat fish one more time, I will ACTUALLY DIE.

Luckily, the spell breaks and the deer runs off before I can try and commit murder. I sprint back and wake up my dad, yelling about how we need to kill the deer and eat it. Maybe we could collect some rocks and stone it to death? I’m vague on the details, but very excited about it. I have a vision of making a hat out of its fur, possibly confusing it with a raccoon. I’m still clutching my underwear in one hand as I jump up and down and demand my dad go kill Bambi’s mom.

My dad, jerked out of sleep by a three-foot tall bloodthirsty lunatic in a pink T-shirt, stares at me. After breakfast—fish, beef jerky, chocolate water—he announces that it’s time to go home.

Seven hours later, we’re sitting in the car with the air conditioning on and a Britney Spears CD playing. My dad has listened to a lot of 90s pop music because of me, which I refuse to apologize for. We pull over at a pay phone and I call my mom, who immediately starts screaming at my dad, less about my disappearance and more about the fact that I’ve missed almost two weeks of school. I wait for them to finish arguing and reread Runaways, which I’ve memorized at this point. For the first time, I notice that Karolina might not like boys.

On our way back, my dad takes a detour to Death Valley for a quick 30-minute hike. It’ll be fun, he says. It’s a once in a lifetime experience. I already did the Grand Canyon, Death Valley should be nothing to me. I am not fooled and lock myself in the car. 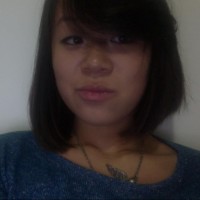 Melody Lee is a New York-based freelance writer who writes about video games for a living and breaks out in hives at the thought of nature. Her biggest role models growing up were Laura Ingalls, Trixie Belden, and Emily of New Moon.