Drew Grant’s last attempt at doling out sex advice to our readers can be found here. The Toast does not endorse Drew’s advice, but you can email us if you have questions for her. Don’t, though.

I feel for you lady, but if putting on that candy-striper outfit is what it takes to give your man an aggressive, inoperable growth on his groin, you’re going to have to give yourself a shot of sodium penthylyne and man the fuck up.  I know it can be kind of scary to jump into the kink pool at first–or any pool, if you’ve been mummified in non-water soluble latex and dunked repeatedly because your boyfriend has got a ’Laura Palmer wrapped in plastic’ thing–but you’re going to need to do it. Your relationship depends on it.

Just think about it this way: Fetish play, like good improvisational theater, should be approached with a “Yes, and…?” attitude. If he’s into feet, say “Yes, and…how about you watch me try on these high heels?” If he tells you he’s always been into blondes but you’re a brunette, say “Yes, and…what if I wore this wig and pretended to be Marilyn?” And if he confesses to being into some butt stuff, say “Yes, and….how about we take this carton of expired milk and funnel it up your colon?”

Being giving in the bedroom doesn’t mean you have to be pressured, but it is about pushing boundaries and venturing outside your comfort zone. Never forget that when you slip quietly into bed with your face slathered in greasepaint, you’re not just about to wake a man who in a moment of vulnerability once expressed his childhood fears of clowns…you’re about to embark on a terrifying, thrilling sex-sperience of a lifetime. Don’t forget your poofy wig, oversized shoes and stock catchphrase “We all float down here!” You’ll have him begging for the sweet release of ejaculation and/or death in no time!

The important thing to remember is that adventurous sex should be about exploring each other’s interests and growing together as a couple. For instance, my fiance spent a lot of time on the couch last month, binge-watching his favorite TV shows and generally being a lazy potato! Did I chide him for watching True Detective instead of me? No! I thought proactively about what Carcosa would do in my shoes. I surprised my baby by sending him on a “sexy scavenger hunt” that led to an abandoned creek down the road, where I had a bound, methed-up volunteer in antlers waiting to be ritually sacrificed to the Yellow King. Boy did his eyes bulge! And it was fun for me too, once the peyote hit and I got really into screaming about time being a flat circle.

Now I’m excited to snuggle up and watch TV with my beau, because it gives me ideas to try in the bedroom. I’m thinking of inviting his sister over to watch next season of Game of Thrones, and I’ve hired a devoted, discreet bodyguard to stand at attention while we binge on House of Cards. So bask in the golden shower of television’s greatest era…you deserve it!

Above all: Don’t let kink become a chore. If you find yourself struggling with ways to keep your man tied and gagged in your sex basement after his first escape attempt, you’re not having fun. Let him go…if you guys are really meant to be together, he won’t stray far. Especially since that shock collar should activate itself after a couple yards. 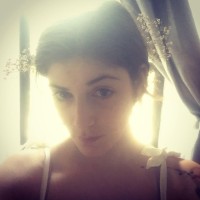 Drew Grant is a culture writer for The New York Observer. Her work has appeared in Salon, BlackBook, Gotham Magazine, The Huffington Post and FuseTV. She's so funny.