My mother wanted to stay in America. She would say later that when she got off the plane, she felt like even the air in America was free. My father thought we should go back to China. After all, the Chinese government had given him the scholarship to come to America to get his PhD, and he was supposed to go back and use his knowledge to help the motherland. This was the argument my parents were having, over and over again, in the spring of 1989. I was six years old and we were living in a tiny basement apartment in Athens, Ohio, where they were graduate students at Ohio University.

My father had left China when I was only 100 days old as part of the first wave of Chinese scholars to study in America after the end of the Cultural Revolution. He lived with a group of other Chinese students, and they saved money by never turning on the heat in the winter and driving an old car with a broken transmission that couldn’t go in reverse. After two years, he saved enough to bring my mother. She babysat, delivered pizzas, waitressed in a Chinese restaurant, and managed to get her own scholarship from the university.  When I was three and a half years old, they sent for me.

I fell in love with America the first time my parents took me to a mall. I had never seen such an incredible, amazing amount of stuff before. We were still using food ration coupons in China. I wanted to stay here, forever. My mother also saw America as rife with opportunity. My father knew that this was a better life, but his sense of duty was strong. He might have won the argument.

But then on April 15, 1989, Hu Yaobang, one of the only outspoken liberal reformers of the Communist Party, who had been forced to resign for his views, died of a heart attack in Beijing. 100,000 university students showed up for his funeral in Tiananmen Square. And they stayed. It was the beginning of the 1989 student democracy protests.

I would watch the news with my parents and see the hundreds of thousands of students and workers sitting in Tiananmen Square. I was too young then to understand why they were there. But now I think they were there for the same reason that my family came to America. Whatever they were calling for—greater political freedoms, less corruption, better economic conditions—what they were really asking for was the chance to have a better life.

The Communist Party declared martial law in Beijing on May 20. It was a tense time. My uncle was an art student in Beijing, and he was going to the square. My father was becoming increasingly upset at how the leadership was handling things. And then it was June 4, and we found out what had happened in Beijing the night before. The army finally moving in. Clearing out the square. Shooting people dead in the streets of Beijing.

My uncle in front of the Goddess of Democracy

My mother was frantic, until she found out that my uncle was safe. I found my father sitting in the living room, writing furiously on a Chinese medicine patch, the adhesive kind coated with Tiger Balm that my mother would stick to my arm when I “caught wind” in my joints. I asked him what he was writing. He read it to me. It said in Chinese, “Deng Xiaoping is a…” then a bunch of rude words about the paramount leader of China that I was too young to understand. Then he stuck the bandage on his forehead and brought me with him to the university. We joined a group of Chinese students and their families marching around the center of campus. I remember holding my father’s hand and walking behind a stroller tied with balloons. It was my first political protest.

We stayed in America because of the Tiananmen Square massacre. President Bush signed an executive order allowing Chinese students who were in the country during the democracy protests to stay. Congress passed a law allowing us to become permanent residents. That all made it easier. But I think we would have stayed now, regardless. I believe my father’s views on his obligations to the Chinese government had changed.

I sometimes think about what my life would have been like if we had returned to China. I was at the Liberty Bell a few months ago, and a group of Chinese tourists was watching a documentary on the history of the bell. The Liberty Bell, said the documentary, reminds Americans of the people around the world who are still struggling for their freedom. And there was footage from the Tiananmen Square protests. One of the girls turned to her friend and whispered, “Is that China?”

My parents are gone now, and there are so many things I don’t remember, so many questions I wish I had asked. I’m left with hazy memories that seem almost like a dream. I look at photos of the Tiananmen students, so young and skinny, hungry with hope, with those white bandages filled with slogans tied to their heads. And I think of my father, marching, with his bandage stuck to the middle of his forehead, holding my hand. 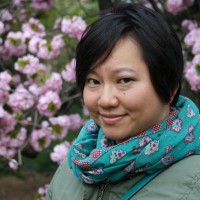 Shelley Zhang writes about China and being Chinese in America at The China Girls. She also contributes her searing wit to the satirical news show China Uncensored. You can find her on Twitter.