The Fanciest Genderqueer You’ll Ever Meet

I’d never thought about being genderqueer until I had to: instead, I tried to think about my gender (a confusing, uncomfortable thing) as little as possible, like a student loan I couldn’t pay yet, or a dentist appointment I’d yet to have scheduled.

The first time I’d really considered how genderqueerness might matter to me was while picking a fight at a nonprofit leadership conference for LGBT people, as sometimes happens.

After a long day of mock fundraising, team building exercises, and more powerpoints than there were humans in the room, people were tired. This being a conference for professionals, that meant it was the perfect time to interrogate our notions of gender identity and expression.

Preferred pronouns came up, the notion of asking others which pronoun to use to describe them, instead of intuiting which pronouns to use, as a gender witch might do. A power player business professional from the Midwest made a statement.

“I don’t see the point of that genderless stuff. Like ze/zir, or genderqueer, or whatever.”

Heads bobbed in agreement across the room. The older people in the group seemed pleased by the pronouncement, while the younger people, conscious of who makes the hiring decisions at LGBT nonprofits, nodded more noncommittally.

After three years of gender studies classes and 3000 hours on Tumblr, I was momentarily dumbfounded. The coherent part of my brain urged patience.

“Do not, do NOT, use the word neoliberal when responding,” it cautioned. “You are the only person in the room wearing flannel.”

I resorted to the well worn tool of the bitter activist:  passive aggressive questions.

“What don’t you like about those phrases? What feels wrong about them to you?”

He wrinkled his nose with obvious distaste. “Why can’t they use the same words as everyone else? Why do they have to be so…fancy?”

Fancy. “Elaborate in structure or decoration.” Implicitly: unnecessary or excessive. Adorned with ribbons. Glittery (admittedly those last two connotations might just be me.)

Fancy is a polarizing word, particularly when applied to notions of queerness. I knew Mr. Midwest’s picture of genderqueers because it was one I shared. In his mind, and mine, genderqueerness was the epitome of fancy. Rather than “normal” gays, lesbians, or trans folks who identify their gender as aligning with notions of “male” or “female,” genderqueer people threw their gender identity all over the place. They went to fancy liberal arts schools, wear fancy sweater vests, and buy fancy monocles for tea parties. Fancy genderqueers are white, transmasculine, well dressed, able bodied and distinctly classed. Even knowing that this narrative is wrong–that it erases people who embrace the feminine side of the spectrum, people of color, disabled folks, and people who aren’t willing or able to pay for $50 for a tie, but are still gender nonconforming, the “fancy” archetype prevails as the singular representation of genderqueer, nonbinary experience. Of course, this erasure is intentional: this “fancy” archetype stands alone because white supremacy, misogyny, and classism conspire to keep narratives of queerness that don’t fit within this narrow category as out of sight as possible. Thus, we’re left with fancy. Fancy genderqueer, genderfluid, and gender non-conforming folks, under this man’s definition, are genderqueer because they choose to be, not because they “have” to be.

But “fancy” is more than just aesthetics:  it’s elaborate. Why can’t they pick one or the other?  Midwest Power Gay was asking. Why do they have to configure their gender in such ornate ways, with spectrums and genderbread people and brightly colored hair? Why do they need pronouns that aren’t grammatically correct, or have unexpected “z”s? In short: why can’t they just be like everyone else?

This is part of a narrative of queerness as linked exclusively to oppression. The popular narrative of both sexual and gender nonconformity is based on norms of rigid, compulsive sacrifice: “born this way,” “I can’t change,” or “trapped in the closet.” Even as we celebrate gender and sexual diversity, we demand proof that deviation is compulsive, uncontrollable, and that one has suffered innumerable tribulations as consequence. The monolith of gay culture creates an understanding of gender identity as linked to personal pain. You can’t use weird pronouns unless you’ve shown how you’ve suffered for them (our Puritan roots are showing.) Without that conditional of coercive queerness, genderqueer people don’t have a right to take up space.

It was in that moment, the incongruity of anti-fanciness advocacy in a hotel conference room with a chandelier, that I realized my own fear of fancy. The “fanciness” of genderqueerness made it seem impossible to apply to my own gender expression. I don’t have time to think about my gender identity, I had always thought. Not when there’s more important things to think about, like the criminalization of poverty or the evisceration of the ecosystem. I realized that not feeling male or female, feeling uncomfortable in “women” only spaces while feeling sure I wasn’t a dude, and getting called “sir” a lot, were not extraneous feelings and experiences that I needed to ignore. Just because they didn’t perpetuate my abject suffering, didn’t mean they weren’t worth acknowledging.

Not to mention prioritizing “serious” problems over figuring out my own gender identity was not only nonsensical, but offensive, considering the other things I made time to think about. (The criminalization of poverty is more important than my gender identity, but not as important as whether or not I could put pizza in a waffle maker?)

For the next six months, I often laid on my bed and stared at the ceiling. “Is it okay for me to be genderqueer?” I asked the crack in the shape of a rocket ship. “Is that appropriation of a term meant for other people? For trans-ier people?” The ceiling didn’t respond:  it was my own question to answer. Plus, rocket ships don’t have genders, so it didn’t have a clue.

Finally, after the fifteenth iteration of the “Am I genderqueer? Is this exploitative?” conversation, a friend of mine had had enough. “Do you feel genderqueer?” she demanded. “When I use “they/their pronouns to describe you, does it feel right?”

I paused, but I already knew the answer. “Yeah, it makes sense.” She shrugged. “Then ask people to use they and their pronouns when they talk about you. Take up space.” More or less: forget fancy.

Being genderqueer is recognizing what makes me feel comfortable, and being okay with taking up space–not to dominate, or to speak over others, but to make myself heard and recognized. For me at least, it doesn’t come from a place of unhappiness or suffering. It simply feels like I’m paying attention to who I am and who I want to be. It lets me be comfortable with me, sans bow tie, and listen. 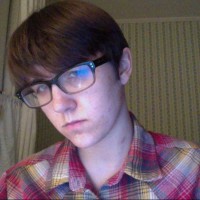 H owns at least three pairs of slacks without pizza stains on them. They Gchat and work in Washington, DC.