Superdad: Growing Up With a Deaf Parent

My father calls the tooth fairy the tooth bunny, because my grandparents didn’t know how to say “fairy” when he was a little boy. He jumped off the roof of their house once, using a towel as a cape, because his parents explained to him that a man named S-u-p-e-r could fly. They spread their arms out wide, to emphasize how he flew, but no one knew how to tell him Superman wasn’t real.

When I was born, I was relatively unresponsive to noises. My parents were nervous, but they knew that no matter what, they’d be able to love and care for me.

I was napping one afternoon when my father decided that it was time to hang a shelf directly over my crib, not thinking about how loud a drill could be. He planned it out perfectly, made sure the markings on the wall were level, then began drilling.

My mother, who had been doing laundry two floors below, came running up the stairs. Panicking.

She banged her right hand into her left, “Stop! Stop!”

My father was perplexed. “You didn’t want the shelf here?”

“I do, but the baby. She’s sleeping,” my mother explained.

“The drill,” my mother said, waving her hands by her ears. “Noisy!”

“Oh!” my father covered his mouth with his hands, guiltily.

They stood over the crib for a minute or two, waiting for me to wake up. But I didn’t, and they cried.

“Maybe she can’t hear?” my mother wondered to my father, who was standing next to her, crying.

We were out way past the buoys, my father and I. The waves were small, but they were powerful enough to keep the boat rocking. My side of the boat hung just over the water, my father’s weight anchoring the opposite side down.

My father didn’t say much, but he was a very observant man and never kept any of his observations to himself.

“Annarose,” he’d say, tapping my leg with one hand, pointing to something on the horizon with the other, “look!”

I always listened to my father, but when the tiny beach disappeared, my nerves kicked in. I banged on the side of the boat to get his attention.

“Too far,” I mouthed, pointing at the shore.

“It’s fine,” he said. He always said things were fine.

A few minutes later, I heard a whistle coming from the beach. I squinted. I made the letter C with my right hand and started banging it against my chest.

My father rolled his eyes.

“Relax,” he motioned with both of his hands. “It’s fine.”

Panic ensued. I was sure we were going to jail for being too far from the beach. If you break laws, you get in big trouble. The whistle kept blowing. Tears started pouring out of my eyes, but I stopped trying to get my father to listen to me, so I cried loudly to myself.

“Annarose,” he said, tapping my leg, “look there.”

He pointed to the sunset. My father loved the sun and he loved colors. He was right, it really was beautiful.

“Pretty,” I signed, nodding. He smiled, then looked at me and noticed I was crying.

“What’s the matter?” he asked.

He smiled again and patted my leg. “Okay, okay. Ready to go back?”

When we rowed onto the beach, the cop was furious.

“You’re not supposed to go past the buoys! Whatddya think they’re there for anyway?! What kind of example are you setting for your kid! When someone of authority whistles at you or tells you to come back, you listen! Ya hear me?! Sir! Don’t just walk past me!”

My father dragged the rented boat onto the beach with me in it. He collected our shoes and the towels we sat on. His strong arms picked me up. He wasn’t in a rush and he most certainly wasn’t bothered by the cop.

“Are you fucking kidding me?!” the cop yelled. He was really angry now. “Excuse me! Sir!”

He tapped my father on the shoulder.

My father kissed my forehead and put me down on the sand. I was too scared to cry.

My father put his right hand up in front of the cops face. He jammed his right pointer finger into his chest, brought it up by his right ear, then slammed it on his chin. “I’m Deaf!”

Then he motioned to the cop to relax, he explained with his hands that he wanted his daughter to see the sunset. Then he told the cop to enjoy the evening, took my little hand in his, and we walked to our car.

When I was in third grade, my father came in to Mr. Rich’s class to teach everyone sign language. He taught us the alphabet, signs for our relatives, how to sign our favorite foods, and the signs for animals.

Toward the end of his lesson, he asked me to stand next to him at the front of the class. He introduced me as his daughter and explained that I was known as a CODA in the Deaf world, a Child of a Deaf Adult. He asked me to help him show the class how we can have a full conversation without using our voices.

He asked me what I did in school, what I ate for breakfast, and how many siblings I had. I answered every question perfectly, without even moving my lips. I was, as my father said, “a natural.”

After my father left for the day, Samantha Miller, who sat at the table next to me, came over to me and said “Hey, I know sign language, too!”

“You do? That’s so cool!” I responded, excited that I’d have a friend in class I could talk to in secret if we wanted.

And with that, she put up her middle finger.

Whenever we rode our bicycles, my father was always “too far ahead of us,” according to the standards of my mother and I. We could never get his attention if we needed anything, and he very rarely turned around.

My father was in the Deaf Olympics. He won too many triathlons to count, and he competed in the Iron Man Triathlon twice. For him, biking should be fast, a competition.

Whenever we rode together, he’d ride ahead, getting his workout in, while my mother and I biked at our own pace, talking the entire time. It wasn’t until recently that I realized how boring that must’ve been for my father. No wonder he rode up ahead.

Most of the time, when a person realizes my father is Deaf, they just stop talking. Other times, they look at me with their head tilted and say “Oh, I’m so sorry.”

I’m not sorry though, I always thought it was pretty cool.

He told me once that if he could hear, he wouldn’t. “Too noisy,” he used to say, covering his ears with his hands. He told my mother that he wished he could hear her voice, then mine, then my three brothers’ voices, then go back to being Deaf. Other than that, he loves it.

Every boyfriend I’ve ever had said these words to me at least once: “I’m going to learn sign language so I can talk to your father.” And upon every breakup, not one of them knew how to sign anything other than hello and goodbye–the universal wave.

When I was 25, my boyfriend told me he was going to learn sign language. I smiled, as per usual, and said that that would be wonderful. Two weeks later, he enrolled in American Sign Language Level One at Lehman College with my father, Professor Mike Russo.

He went to class for two hours every Monday and Wednesday night for two hours. He completed the entire course, finishing off the semester with an A.

On November 20, 2013, one month before the semester ended, he walked out to his car with my father after class. Before they parted ways, he used his hands to ask my father if he could marry me. My father, teary-eyed and choked up, gave him a big hug and said yes.

My boyfriend then drove home and proposed to me outside of our Yonkers apartment. We’re getting married in October of 2014, with an interpreter standing next to us, and my father’s full approval.

I grew up in my mom’s mom’s house with my grandmother, mother, father, three brothers, and our pitbull. My mom’s mom and my father never got along, mainly because they couldn’t communicate. My grandmother took one sign language class, decided she couldn’t do it, and quit.

To this day, after 27 years of living with my father, my grandmother can still only mold her hand to say “I love you” to her grandkids.

Now, at 93, she suffers from Alzheimer’s.

She doesn’t remember quitting sign language. In fact, she’s quite intrigued by it now. Recently, she asked my mother why she was using her hands when my father was in the room. My mother explained to her that my father was Deaf and that they communicated through sign language.

“Oh that’s beautiful,” my grandmother said. “I wish I could do that.” 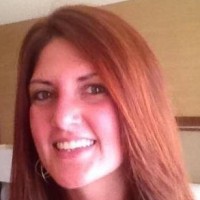 Annarose Russo is a graduate of Western New England College and is currently and M.F.A. student at The City College of New York. She has traveled the world in search of all things positive, writing stories as she goes. Russo currently resides in Yonkers, NY, with her fiancé.